Monday, May.  The alarm went off at 7:00 this morning and we got busy with the final preparation for our travels. The air bed that we slept on last night, a couple of lamps, and some last minute items had to go to the storage unit, so Tom did that while I did the final loading of the trailer and walked Frisco.  Arlene came over to say goodbye and she said the nicest thing to me, "you girl, are one of the best things to ever come into my life".  I told her that the feeling was mutual, that I truly do value the friendship that we have developed over the years, and, of course, I cried, and she was pretty close to it.  She also offered for us to stay at her house if we ever got tired of being in the trailer, or just want to come for a visit.

We were on the road by 10:30 (the goal was 10:00) and we traveled US 60 east through Miami and Globe, then headed southeast on US 70 through Safford, until we came to I-10 at Lordsburg, then went east to the LoW-Hi RV Park in Deming, NM, our destination for the next few days. The drive was about 190 miles and took us 6 1/2 hours with 3 stops along the way. 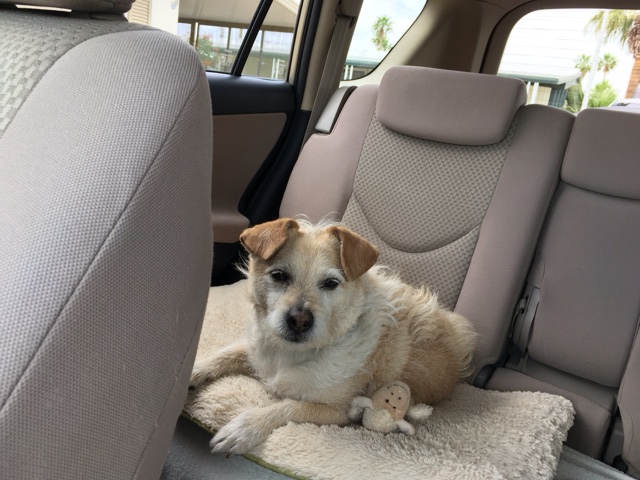 My little traveler. He still has the very first toy we bought him and looks for it every time he gets in the car.

Day 1 of our summer adventure went well, it was a cloudy day but good for driving and the scenery was nice, with desert views and a backdrop of mountains in most directions.  The only wildlife I saw was a Roadrunner scooting across the road in front of me and a few vultures perched on top of a Yucca plant.  The stretch of US 70 between Safford and I-10 was a great two-way highway and we never had another vehicle behind us until we approached Lordsburg, about a 65 mile stretch.  I led the way since Tom can't see me behind his trailer and we were able to maintain a comfortable distance between us.  It was not ideal, having 2 vehicles but I feel we are going to need the option later in the season. 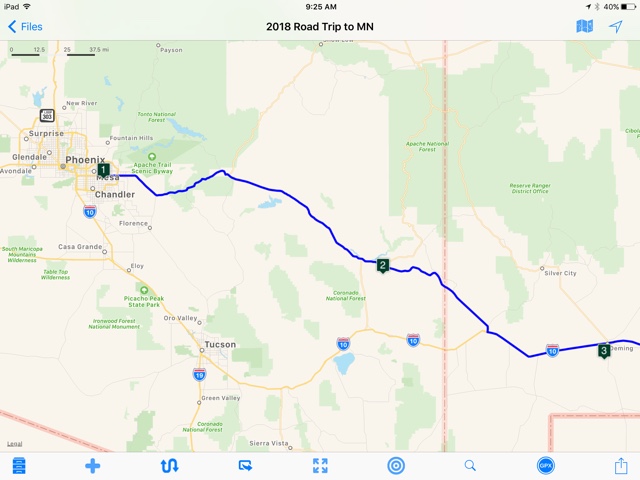 There was a problem with the water hookup when we got settled into our site.  The pressure at the post was good, but there was no pressure coming into the trailer, the kitchen sink, that is.  Tom checked all of the options he could think of and then found the culprit when he took the screen filter off of the faucet and found a big chunk of black plastic blocking the flow.  Sitting outside and having a beer felt good after a long day on the road. 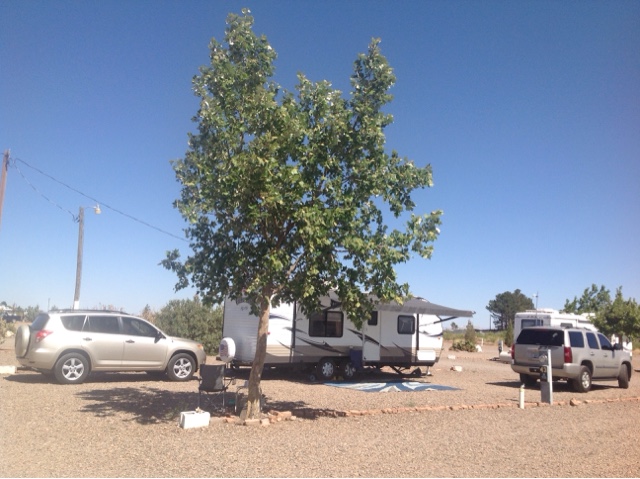 Tuesday, May 8. After Jerry checked us in last nite that, he invited us to join a few people from the park on a trip to Mexico this morning. Even though it would probably have been a nice time, After considering it, we decided to sleep in this morning and take it easy today, after being so busy the last few days and the long day yesterday. It is a place that we plan to visit one day while we are here.

After a couple of people recommended that we see Adobe Deli, we went there for lunch.  The building was an old school house and is said to have several ghosts; the bottles on the bar jiggle, a girl in the corner crying, a cowboy in the hallway, and a past teacher.  The place is covered with hats, license plates, taxidermy animals, historic signs, a cigar bar, and a wine bar in an old San Francisco street car.  We ordered French dip sandwich to share and were glad that we did - it was huge, and very tasty. 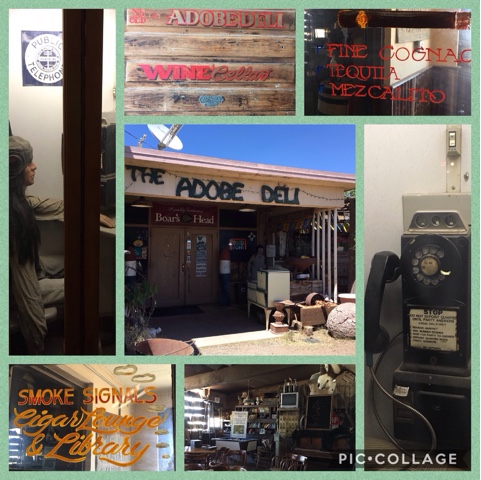 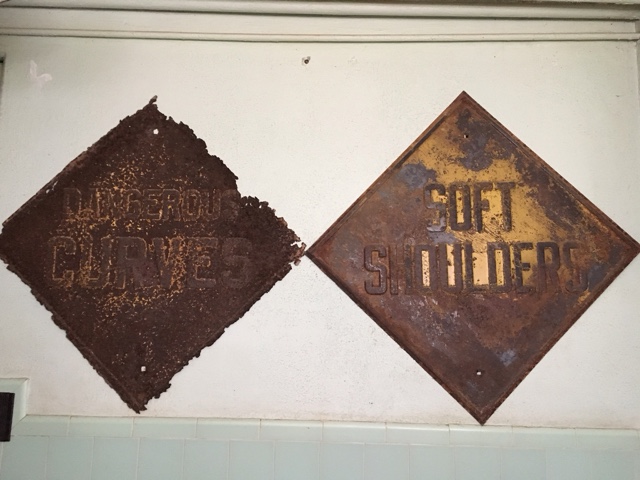 We also explore the Luna Mimbres Museum in downtown Deming that touched on just about every phase of history and had very nice collections on display.

Thursday, May 10.  We spent some time exploring Las Cruces yesterday, starting with a late breakfast/lunch at Los Mariachi's Restaurant, recommended by Tom's friend Ron. The waitress was very friendly and the food was delicious. I had to try the Green Chili omelet and was glad that I did - it was a delicious cheesy, peppery, yummy concoction. 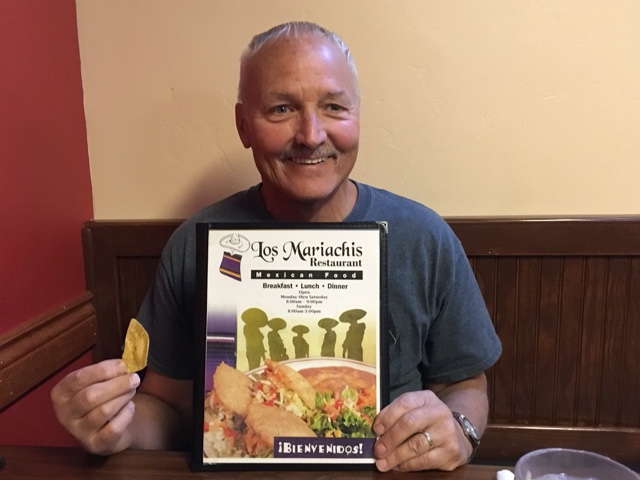 We then drove around in search of some of the murals that the town is noted for, saw a few here and there, but not many as we headed to the Visitor Center.  I wrote down 2 addresses as it was real confusing on their website.  The first address was in a part of town that was under construction, there was little parking nearby, and the building was brand new with no signs indicating that it was the visitor center.  The second address was not too far away and the sign on the door said that they had relocation to the first address that we went to, so back we went. It was open, but they didn't have a lot of information and the guy recommended that we visit the plaza at Old Mesilla, so that is where we headed.

The streets of that old part of town were really narrow, many one-way, but we managed to find it and parked right on the square. We walked around, checked out a few shops, took a few photos and headed back 'home'. 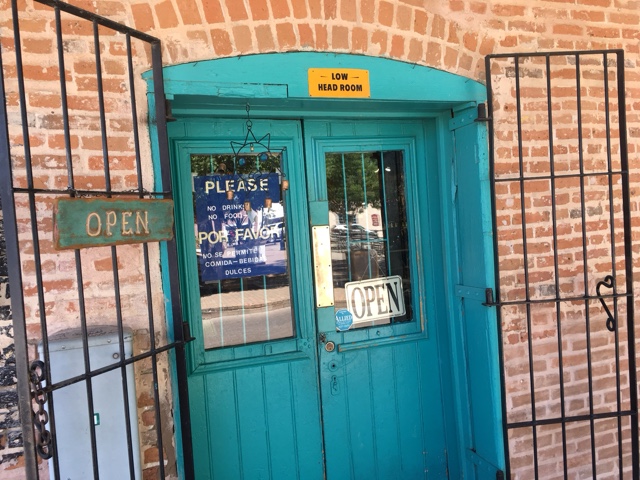 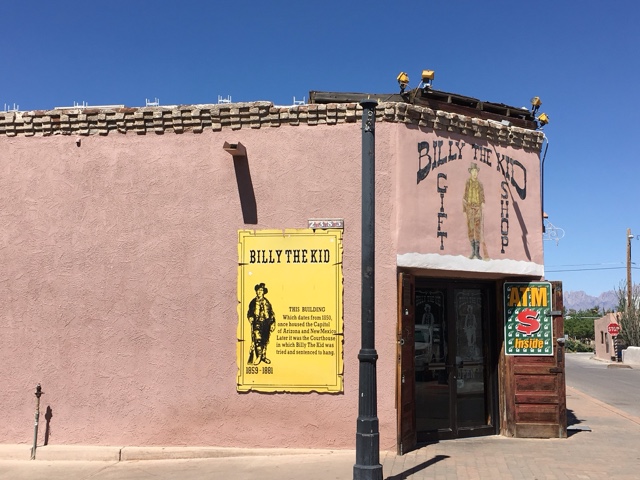 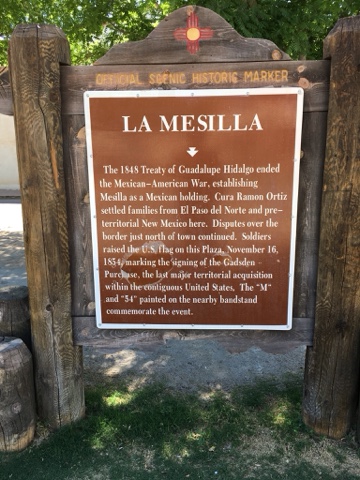 Today was the day to go to Palomas, Mexico, about 30 miles south of here.  It is a very nice little border town, not crowded like Algodones or Nogales and the shops carried much nicer merchandise.  Jerry, the guy that checked us in at Low-Hi RV suggested a stop at the Pink Store for lunch, and it was quite good and enjoyable. A couple of hours there was enough.

A stop at Pancho Villa State Park in the town of Columbus was a learning experience.  Steve, the man attending the museum was quite knowledgeable and knew a lot about the history of the area.  The story goes, as taken from the website:

"On March 9, 1916, the soldiers of General Francisco "Pancho" Villa attacked the small border town and military camp at Columbus, New Mexico. Pancho Villa State Park contains extensive historical exhibits which depict this raid, the first armed invasion of the continental United States since the War of 1812, and also the last one.  From Camp Furlong, General "Black Jack" Pershing, who would later command the Allied forces of World War I, pursued Pancho Villa into Mexico. This 11 month pursuit led 10,000 American soldiers 400 miles into Mexico, but ended without the capture of Pancho Villa. Several buildings dating from the time of Villa's raid still stand in Columbus, and the U.S. Customs House, built in 1902, serves as the visitor center."

Friday, April 11.  Travel day 2, from Deming to Lakewood, north of Carlsbad, NM.  The route we took was US70/I-10 to Alamogordo, the US 82 east to US 285 south to our destination, the SKP Ranch where we got the first guest visit discount of $50 for a week - not sure if we will stay the entire week, but the price is right.  Our site is very nice and the facility is well maintained with nice roads and gardens here and there. We got settled in, had some dinner, and took a walk around to get the feel of the place. This is one of the Escapee Co-Op parks where folks purchase a long-term leased lot for their RV (long waiting lists), they may or may not add a shed and other improvements, and can come and go as they please.  Some choose to rent out their lot and that is what we are on - they do not have a RV park.  There are plenty of activities and we plan to join them for Happy Hour tomorrow afternoon and will also do some laundry.

The drive was beautiful, through the Lincoln National Forest, up to almost 8,000 feet in elevation near Cloudcroft, a popular ski area.  The hardwood forest was pretty and the temps were down in the low 70's.  We then leveled off and we're back in the Chihuahuan desert. 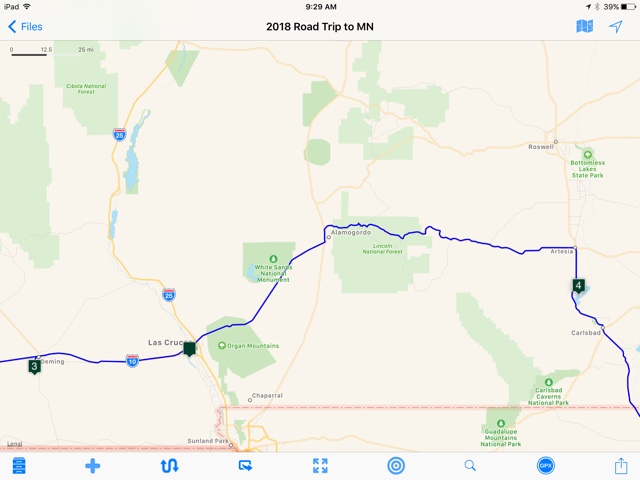 Sunday, May 13.  Happy Mother's Day to all of my MOM friends out there. I got to see Ben and the family briefly this morning, as they prepared for their first bike ride around Lake Harriet with everyone he pedaling their own bikes and nobody needing training wheels.  The kids were excited! 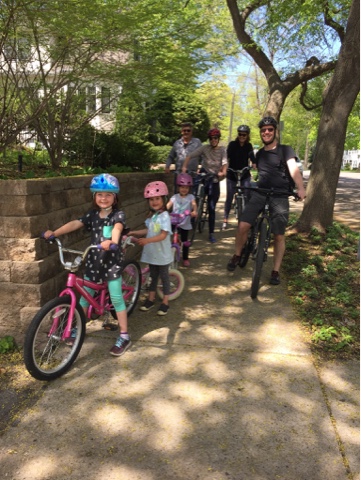 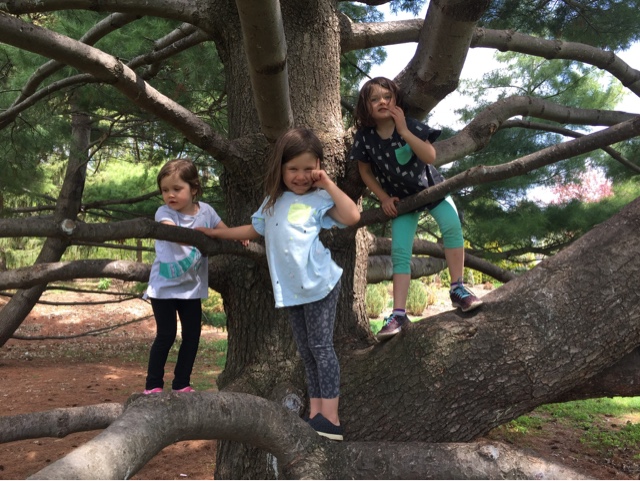 I then realized that I had missed a call from Pat while Tom and I were getting ready for the days excursion to Sitting Bull Falls. The falls are located about 42 miles southwest of here, but we missed the road we had intended to take and ended up on Hidalgo Road and Dark Canyon roads, nice, scenic county roads that were lightly traveled. We missed the road completely because I was looking for the road to Brantley Lake State Park and completely missed the sign for the road that went straight out from the park exit.  Oh well, it all worked out just fine, 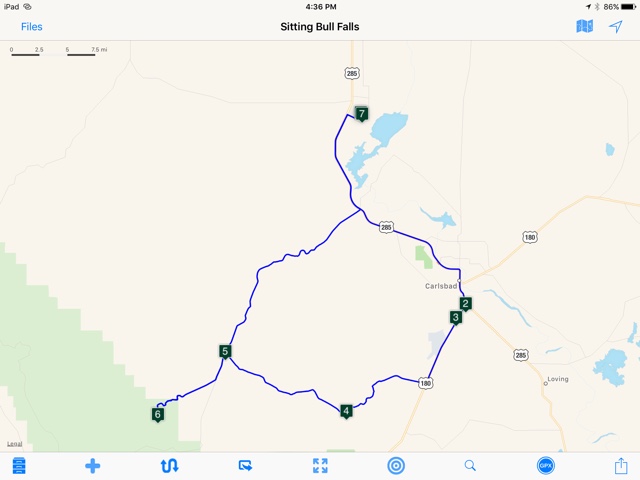 The drive through the canyon was beautiful! Not another soul on the road, so we were surprised that we got the very last parking spot available.  We talked with a friendly park volunteer and learned that there actually was a waterfall, that 'they turned the water on this morning', he was joking, of course.

We walked to the viewing point and I actually got my feet wet when I slid on a rock into a small water pool.  Frisco enjoyed getting up to his belly in the water and drinking the cool stuff.  It was 10 degrees cooler there in the canyon and the scenery was a feast for the eyes. 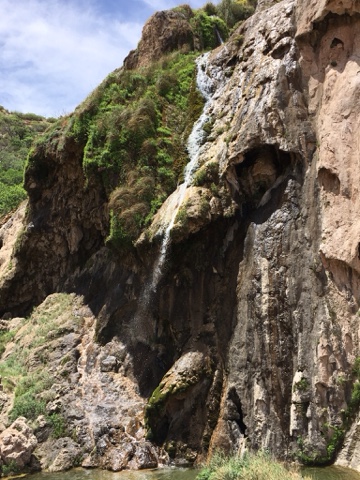 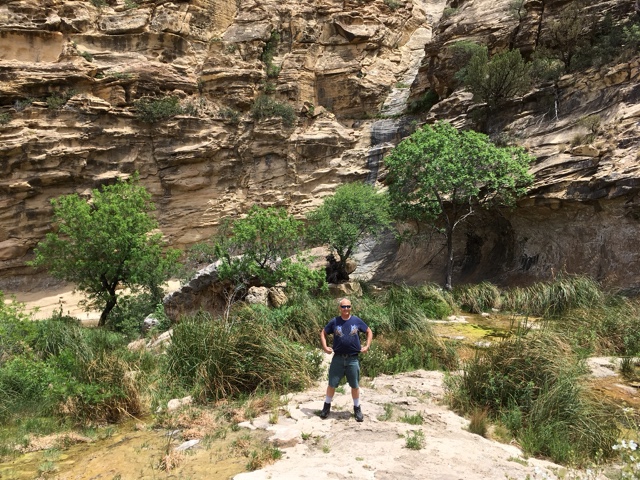 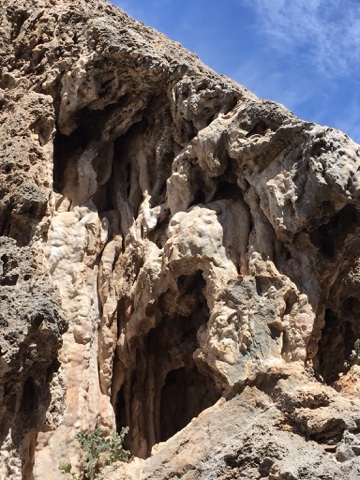 Incredible erosion in the small cave.

Back home, I had a conversation with Pat and that made my Mother's Day.

Posted by Bridge Coast to Coast Saga at 9:32 AM