Monday, September 17.  It was a nice drive today, heading south through Western Illinois on US 67 and then south on MO 19, once we crossed the Mississippi River at Hannibal.  The sky was all blue for much of the way, then a few puffy clouds. There are signs of fall in the trees and the fields of corn and soybeans are brown and in the process of harvesting.  The highlights of the drive were crossing 'Tom's Creek' twice and the 'Salt River' that actually had lots of water flowing (unlike the trickle of that of Arizona near Tempe).

We checked into Lazy Day RV Park, after a rough detour due to the road being closed at the exit on I70 (fortunately we were warned on their website and on the phone).  I believe this is THE NICEST RV park that I have ever stayed at.  It is clean, well groomed with lots of artistic touches, spacious level RV sites, giant majestic Oak trees, all tree stumps are artistic carvings, few peaty insects, and the staff is very friendly.  After dinner, I actually sat outdoors for over an hour without getting a mosquito bite. 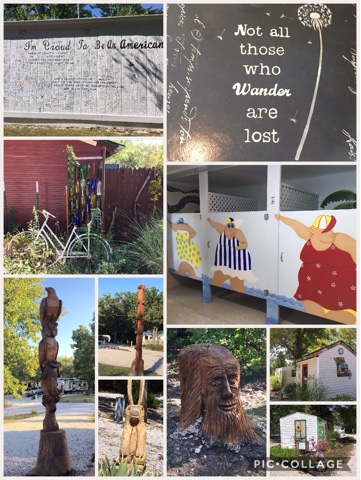 Wednesday, September 19.  Yesterday was 'hang around the campsite day' for me, but Tom had to go to Columbia to buy a couple of tires.  He was hoping the trailer tires would make it back to AZ or at least as far as Joyce's place in Peyton, CO, but they were causing him to worry ever since he discovered the problem when we left Wisconsin.

I spent the morning doing housecleaning and laundry and just enjoying a day without having to go anywhere.  After dinner, we headed on the trail that led down a hill to a lake. The sky was a dark grey and you could hear thunder off in the distance and it started to rain just as we were getting back home, but we did make it all the way down to see the lake, not a house in sight and the water looked cool and clear.

Today was the day to visit Missouri's wine country and we headed to Hermann after having breakfast and walking Frisco.  The drive took us through some beautiful country, with tree covered hills, down into valleys, and then to the Missouri River and the historic town of Hermann, the wine capital of Missouri.  The town of abut 2,500 people was settled by German immigrants and when they realized it wasn't good farm land, they started to grow grapes and produce wine.  There are more than 100 historic buildings that are on the National Historic Register and many of them are businesses and house restaurants, wineries, distilleries and breweries.  There were too many to choose from, so we stopped at the Visitor Center and got a few tips from the friendly lady behind the counter.

We started with a walking tour around the streets and then; sampled cheese and sausage and took the self guided tour at Hermannhof Winery, had a beer at the Tin Mill Brewing Company, a sampling of Vodka and Whiskey at the Black Shire Distillery, had the Best of the Wurst bratwurst, red cabbage and German Potato salad at the Wurst

House, and topped the day off with wine tasting and a guided tour of the Stone Hill Winery.

The Stone Hill Winery is the oldest Winery in the area (since 1847), it sits on a hillside right in town and produces 300,000 gallons of wine each year, and has earned many awards, including international awards.  I thought their sweet wines were the best and I really liked the sparkling 'Blanc de Blanc'. Our final taste was the Concord and Moscato mixed together and that is what we walked out of there with.

Our tour guide was very informative and easy to listen to. She took us into the cellars where the temperature dropped several degrees and the damp walls were built from local stone and the ceilings were curved brick, all were covered with a black film that was mold and yeast (from pores that escape during the mixing process).  Around 1900, the Winery was producing 1,250,000 gallons of wine a year.  During prohibition, the Winery was used for growing mushrooms and then was re-opened in 1965 as a Winery.

Saturday, September 22.  As I was securing things in the trailer this morning, a bowl slipped out of my hands, knocked the coffee pot into the sink and it broke in many pieces. Fortunately, most of it was in the sink and it didn't make too much of a mess.

Tom and I arrived at the Lake Jacomo Campground in Lee's Summit, MO on Thursday afternoon so we could help Bob and Penny prepare for the Celebration of Life that they are hosting for my brother, Rick, who passed away March 26 of this year.  It was HOT when we arrived and we were both sweaty and a bit irritable after getting set up.  We needed to get a few groceries and a replacement for the coffee pot, so headed off to the nearest Walmart that was out of the coffee pot we wanted, so we drove to the another Walmart and we would be able to have coffee the next morning- I don't function very well without it.

Penny picked me up on Friday morning and we set out for Costco and Walmart to get supplies for tomorrow's event.  Later that evening, we had dinner with them and also Rita and Denny at their house. 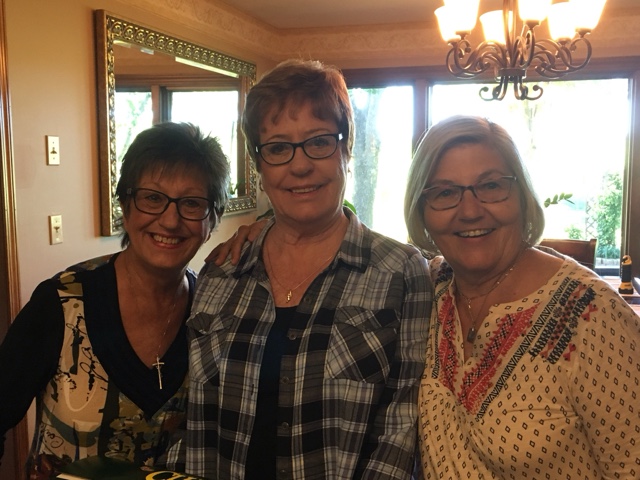 My lovely sisters  Rene, Rita, and I 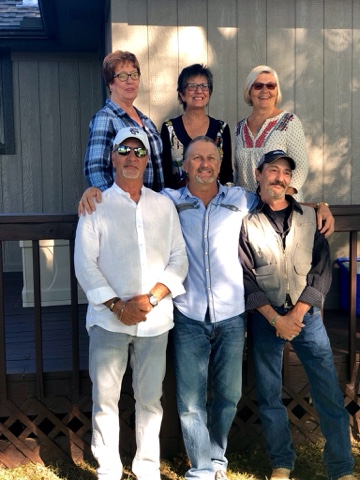 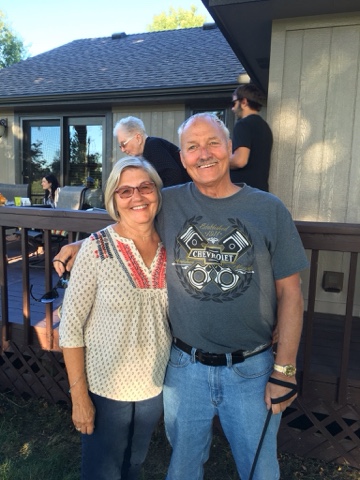 My guy and I 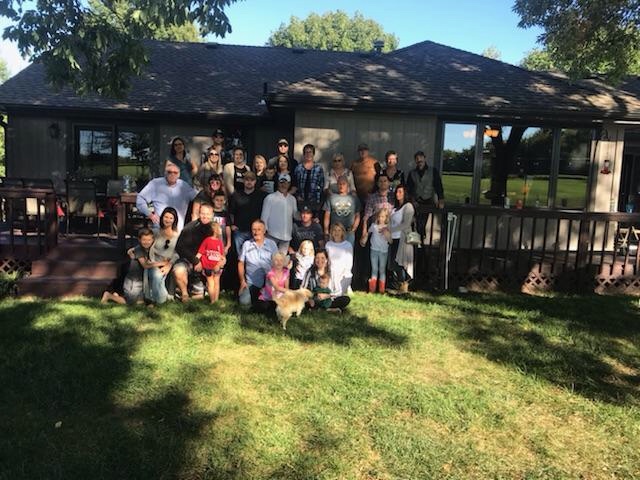 The Whole Gang - out of focus, but it captures the moment.

When I walked Frisco this morning, I noticed a mowed path leading into the woods, so after waking up with coffee and breakfast, we walked that path. It led us to a narrow, wooded path leading in 2 directions. We chose the path that went to the right and it was a nice 1-mile hike that meandered down to the lake and then we took the road back to the campground.

About 30 family members showed up to remember and celebrate Rick's life. His daughter Monica and her husband Loren joined us from Phoenix and she put together a very nice slideshow of photos and had some of his favorite blues music playing in the background. The children of my nieces and neohews, ranging in age from 2 to 10, ran around and played in the yard while the adults mingled and visited.  We feasted on BBQ, beans, salads, and chips for dinner, that was followed by a few people sharing stories, jokes, and toasting Rick with a shot of Irish Whiskey. Once it got dark, we had a huge bonfire and told more stories, goofed-off, and had fun. The crowd had thinned out and all was quiet by about 10:00 and we headed home.

Sunday, September 23. Our plan was to take it easy today and w did a pretty good job of it.  Randy, Julie, and Lanae stopped by on their way but of town for a short visit.

After they left, we decided to go for a walk and took the path that led to the left today. It turns out that it is called the Prickly Pear Trail and was a 1.5 mile loop.  Since we started before we hit the loop trail, our walk ended up being about 2 miles. We were all getting tired by then, so it ended just in time. We saw a few interesting things on our walk - 3 exterior walls of a building constructed of local stone and concrete pilings for posts, a rusted old front end of a car including the grill, bumper and empty headlight holes, and a dead tree trunk that was covered with clusters of 3-5" thorns (turns out that it is a Honey Locust Thorn Tree).

And then Stella, Josh, Barley, and Ron came by for a visit. It was nice because we really didn't get much of a chance to visit yesterday. Those large gatherings are always nice but you only get short snippets of time with everyone.

Posted by Bridge Coast to Coast Saga at 6:28 PM