Monday, September 24.  I have not had good wi-if, so my photos have not loaded and I have been unable to post any of them - they will be added as soon as I have good wi-fi.

We had one more opportunity to see Rita, Denny, and Bob this morning when we met up with them at First Watch for breakfast.

After we said goodbye, we headed to the KC City Market and the Arabia Steamboat Museum. I had been there before but I knew Tom would enjoy it and I enjoyed it the 2nd time around - a fascinating story and collection of artifacts.  Check it out n their website www.1856.com.

Back home, we started to prepare for tomorrow's drive. I cleaned and rolled under the rug while Tom hooked up the trailer. The rest of the stuff is last minute and will be done in the morning. We're hoping for a 9:00 start.

Tuesday, September 25. We were hooked up, secured, and on the road by 9:00 - we made our goal!  I've been dragging butt all day long, since I tossed and turned and didn't sleep much until after 3am this morning.

Our destination was a distance of about 245 miles to  Lucas, KS. We chose this place because we read an article in the travel section of the Minneapolis newspaper and  because it is listed on Atlas Obscura as a folk art attraction, known for the Garden of Eden, the World's Largest Collection of Smallest Versions of Largest Things, and the Bowl Plaza, an artsy public restroom shaped like the largest John.

What else is there to do when you are on a 3-day hop plan? We like to settle in and not have to move immediately after a long day's drive, thus, the 3-day hop.

Wednesday, September 26.  After a leisurely breakfast, we walked to town to see some of the attractions, starting with the Grassroots Art Center whose mission is to educate, exhibit, document, and preserve folk art works from the area.  We didn't take the tour, but were able to see many examples of items that were made by local artists and were for sale.

As we walked the streets to the Garden of Eden, we saw many examples of local art decorating store fronts, benches, and light poles.  We did take the tour of the Garden of Eden www.gardenofedenlucas.org and a very interesting story it was.  Samuel Dinsmoor started building his visionary home at the age of 64 in 1907. It took him 22 years to complete the home and park. He always intended to have it open to the public as a museum.  It is constructed from logs cut from local limestone in a log cabin pattern.  The house has 11 rooms with beautiful, ornate woodwork - every door and window are a different size. Basement stairs and windowsills are all constructed of concrete, as are the porches, railings, and trim on the porches.  The yard is full of ornate concrete trees with statues from the Bible and political references, including a concrete American flag with 48 stars.  Dinsmoor was a Populist politician and believed that everyone should have a platform to be heard and respected and was against big business and monopolies. 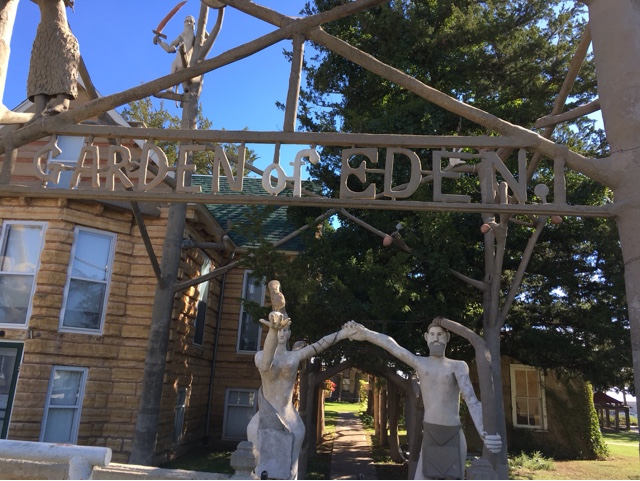 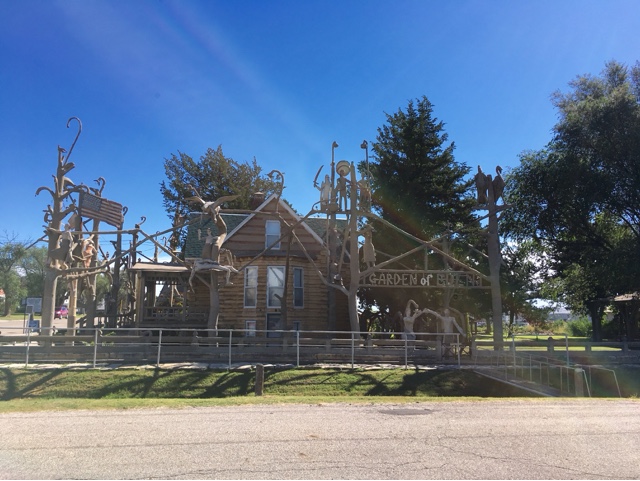 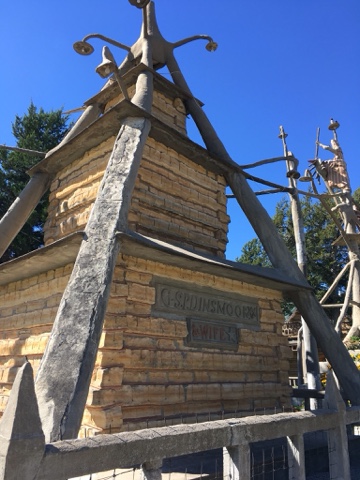 Mr. Dinsmoor and his wife are entombed on the property and we actually visited him in his glass-topped coffin.  He built his casket of concrete and requested that the local masons follow his final wishes - no religious ceremonies, only to be placed in the tomb that he built for this purpose.  He was pretty gnarly looking, as a small crack was discovered in the outer glass panel and allowed exposure to air and humidity and the body started to deteriorate and mold.

Across the street, on a small fenced lot, was the sculpture garden of Roy and Clara Miller. The garden was started as a rest area for weary travelers along Highway 18 and for the citizens of Lucas and all of the sculptures were later moved to this location. They collected unusual rocks in their travels and constructed miniatures of the town's buildings and cone shaped towers for the gardens. 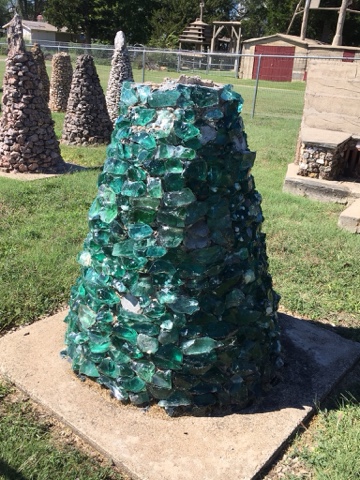 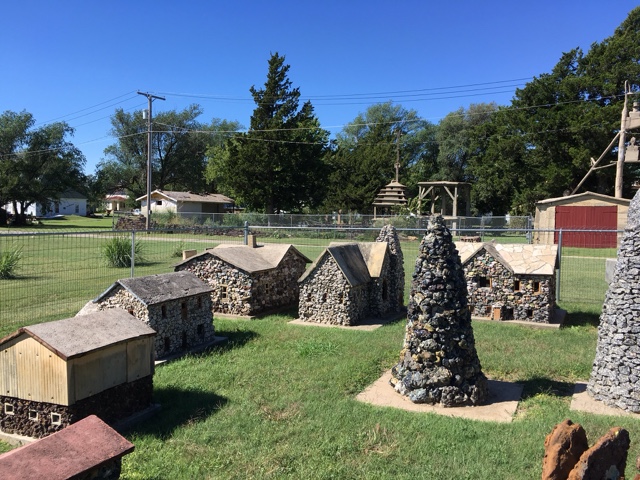 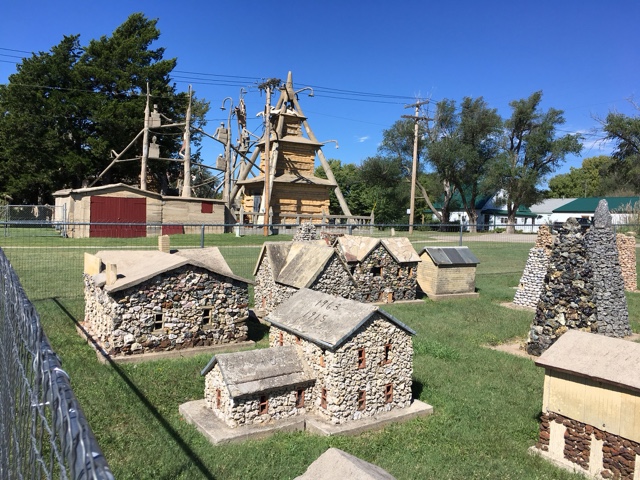 We walked on to Main Street and visited the Public Restroom (Bowl Plaza, because it is shaped like a toilet bowl).  The interior is covered with beautiful mosaics, masculine in the men's room and feminine touches in the women's - very tasteful and nice. The adjacent gardens are the American Fork Art sculptures. 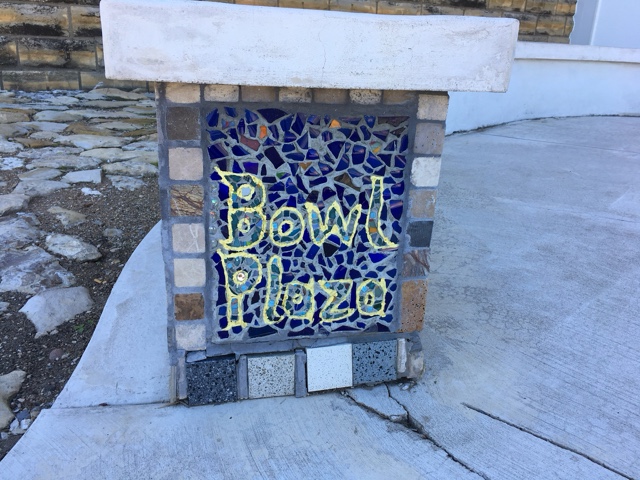 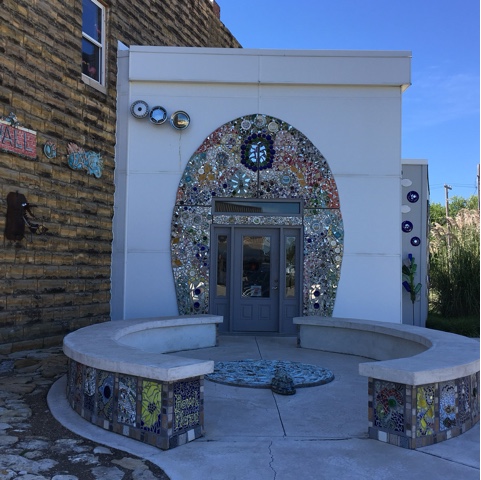 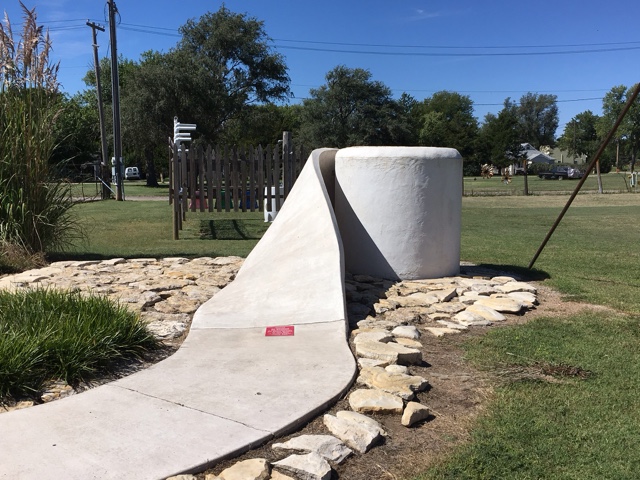 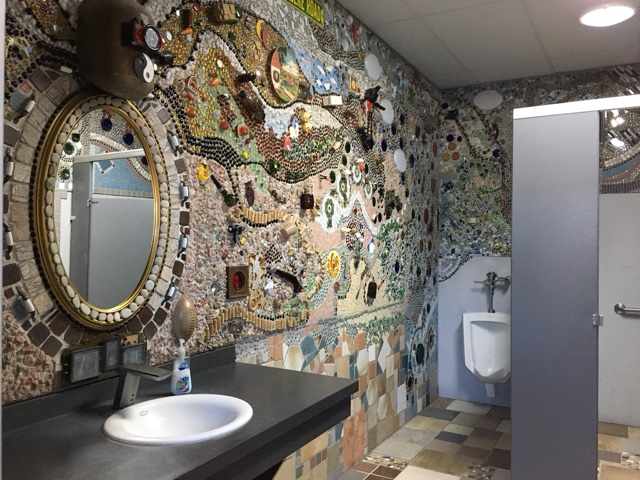 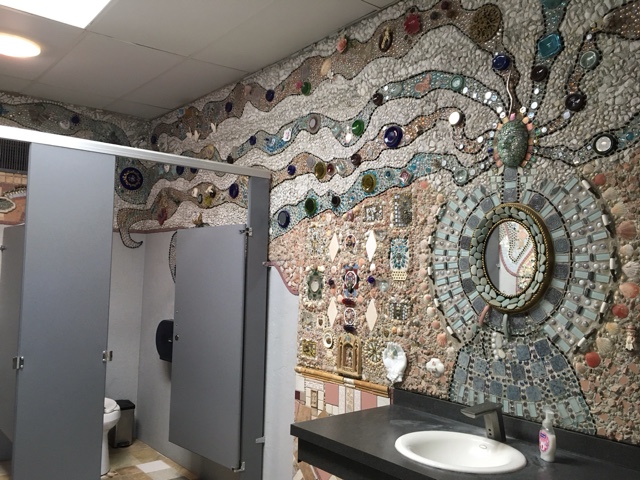 Our last stop, at Brants Market, has been in the same family for generations, where we bought bologna and sausage made from old family recipes passed down through the ages and also a couple of local cheeses.

Thursday, September 27.  Today was to be a driving tour, so again, we took our time getting ready this morning and were on the road by 11:00, heading south on the Post Rock Scenic Byway to Wilson State Park.  Early settlers used the native limestone to cut fence posts and building materials, since there were few trees around.  The limestone is chalky but hardens as it ages, thus making for sturdy structures.  The roadsides are lined with the fence posts all along the way.

We meandered around the park, checking out campgrounds and looking for a hiking trail.  When we finally found the Dakota Trail, it was only about a half-mile long, much of it in disrepair.  The views of Wilson Lake and the surrounding hillsides were beautiful.  Whoever said that Kansas is flat has never been through the Flint Hills or to this area. And that is exactly why we like to get off the beaten path and avoid the interstate highways.  There is always something to see and do wherever you go.

We were both hungry, so stopped at the K18 cafe and had a nice lunch, then filled up with gas and headed back home to relax.

Sunday, September 30.  On Friday morning, we left Lucas and headed west on KS-18, connected with US 24 then south on US 83 to Oakley and the High Plains RV Resort ($40/nite with our Good Sam discount) where we will stay until Monday.  The place is not even close to being a resort but is more like a dried up parking lot - clean and neat but not a resort.

They bragged up their restaurant, Cap'n Jack's Pub, that is right on the grounds, so we tried that out on Friday night.  I wasn't impressed - went for the fish and chips and the fish was so overlooked that I had to cut it with a knife. As we were eating, I saw the cook go to a freezer and pull out a slab of fish - no wonder the breading got tough - it had to deep fry long enough to cook the fish. Yuck!  Another reason that I wasn't impressed was that the only fresh item on the menu was a Caesar Salad - not even a piece of celery with my Bloody Mary or a slice of lemon with our fish.  Oh, well - deep fried food must be what folks eat around here.

Yesterday, we toured The Buffalo Bill Cultural Center, a brand new facility with nice exhibits and a very friendly attendant who we talked to for quite a while. It was so cold, standing in the wind to check out the Buffalo Bill Sculpture out in front of the building.  The sculpture depicts the "Birthplace of the Legend" - where the title of Buffalo Bill came to William Cody when he killed more Buffalo than William Brigham did in a contest. 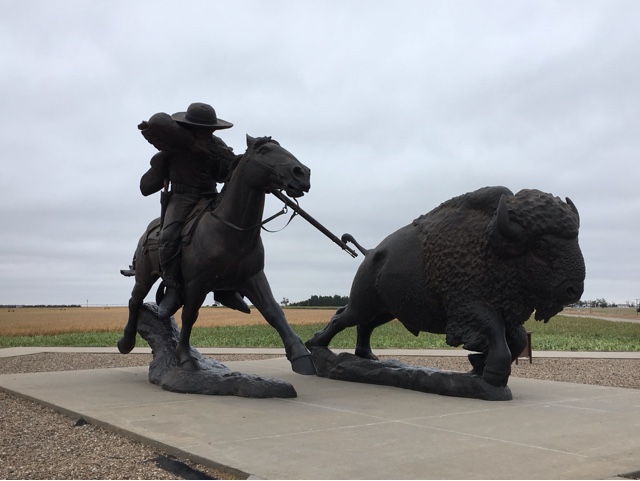 Our next stop was the Fick Fossil and History Museum that houses the personal collection of fossils, artifacts, dinosaur bones, and artwork of Vi and Earnest Fick.  https://www.visitoakleyks.com/fick-fossil-museum. The largest item in the collection is the Xiphactinus Audax, a 15-foot long prehistoric fish. There is the skull of a 30-foot marine reptile, a sod house, and lots of other historic and art displays.

The plan for today was to hike the trails at the Smoky Valley Ranch, but it was 45 degrees, drizzling and a cold wind was blowing.  Plan B was to drive to Monument Rocks, an area south of here that was formed from deposits remaining from the Western Interior Seaway (a huge area through the middle of the country that was covered in ocean during prehistoric times).  The formations of chalk are covered in fossils of shells and we were told we might even find sharks teeth on the ground, but that didn't play out. 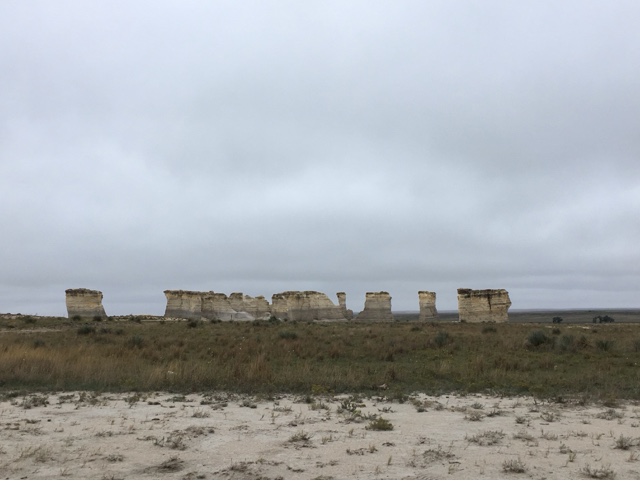 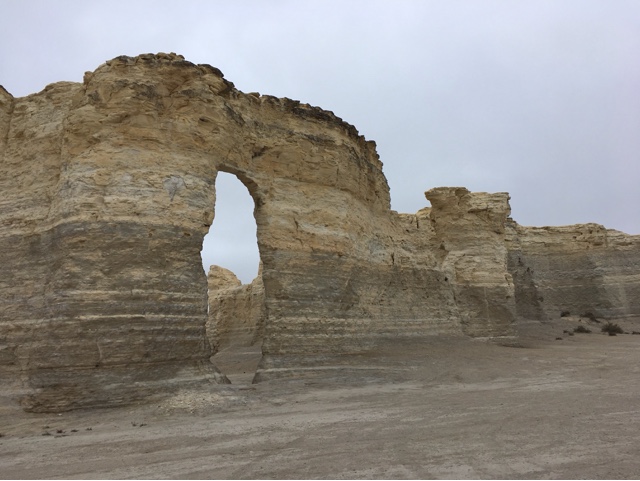 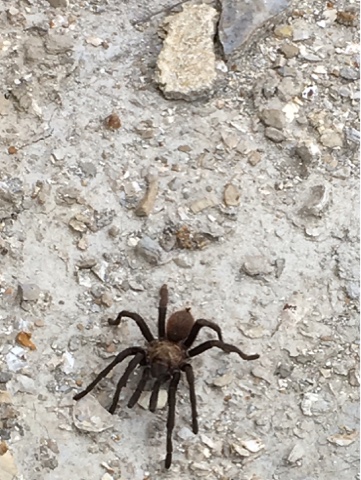 On our way back home, we stopped at the Keystone Gallery where a couple has a collection of several fossils that they have found nearby.  Again, an amazing exhibit. 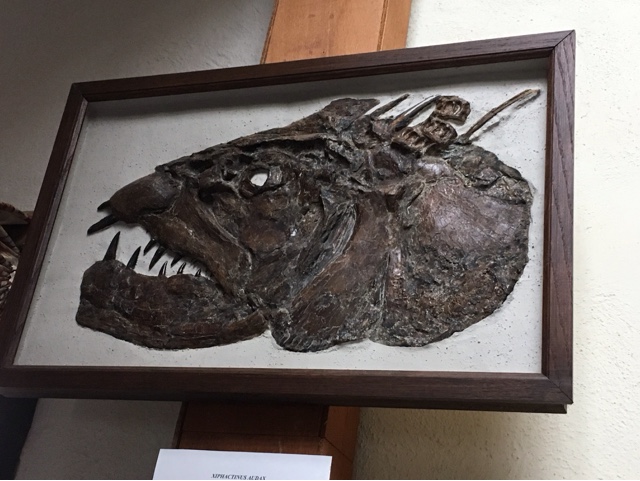 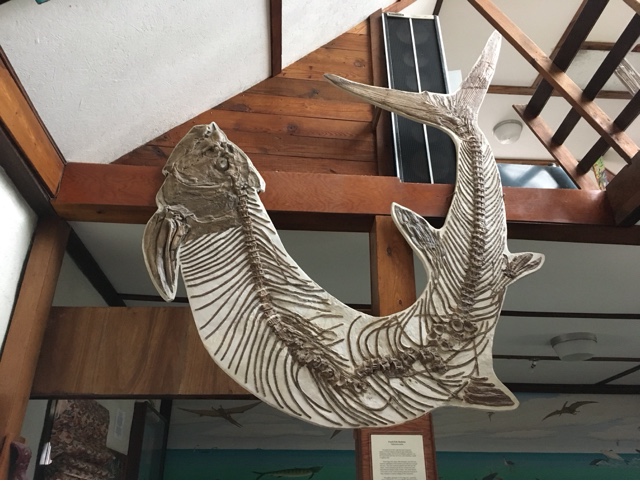 Posted by Bridge Coast to Coast Saga at 4:54 PM