Yesterday started with breakfast at the Highland Grill at the corner of Cleveland Ave and Ford Parkway. We chose a picnic table on the sidewalk and ate our breakfast as traffic went by. We were just finishing when we felt a few drops of rain, hurried to get under cover, paid our bill and headed for the car - just as the rain came to an end. I chose a delicious breakfast that I had never had before - a sweet potato hash with sausage. It had sweet potato, carmelized onion, kale, sweet red pepper, and spicy sausage, topped with an egg and some yummy guacamole. There was enough that I had the leftovers for dinner and a little bit for breakfast this morning.
We then went to the Walmart in Bloomington to pick up a few things. Tom had read that they had a liquor store, but there was none. Again, it was a disappointing store with a DIY cart sanitation system, few people wearing masks, filthy checkout aisles, and a slow, unfriendly checkout person and filthy floors.  The last time we went to a Walmart - in Inver Grove Heights, we were disappointed to learn they didn’t have a produce or meat department - what? Zoning? COVID? I don’t have a clue.
This morning, we decided to do something a bit different for our walk and we headed across the river to the historic sites at Mendota for a self-guided walking tour. There is a series of historic buildings just west of MN-13 in the little town with a population of 128. We saw the Sibley House, a limestone building that was headquarters for a fur trade company and built in 1838, the Cold House (storage for furs), and the Wash House (also a summer kitchen). It is currently the caretaker’s house.
Sibley House 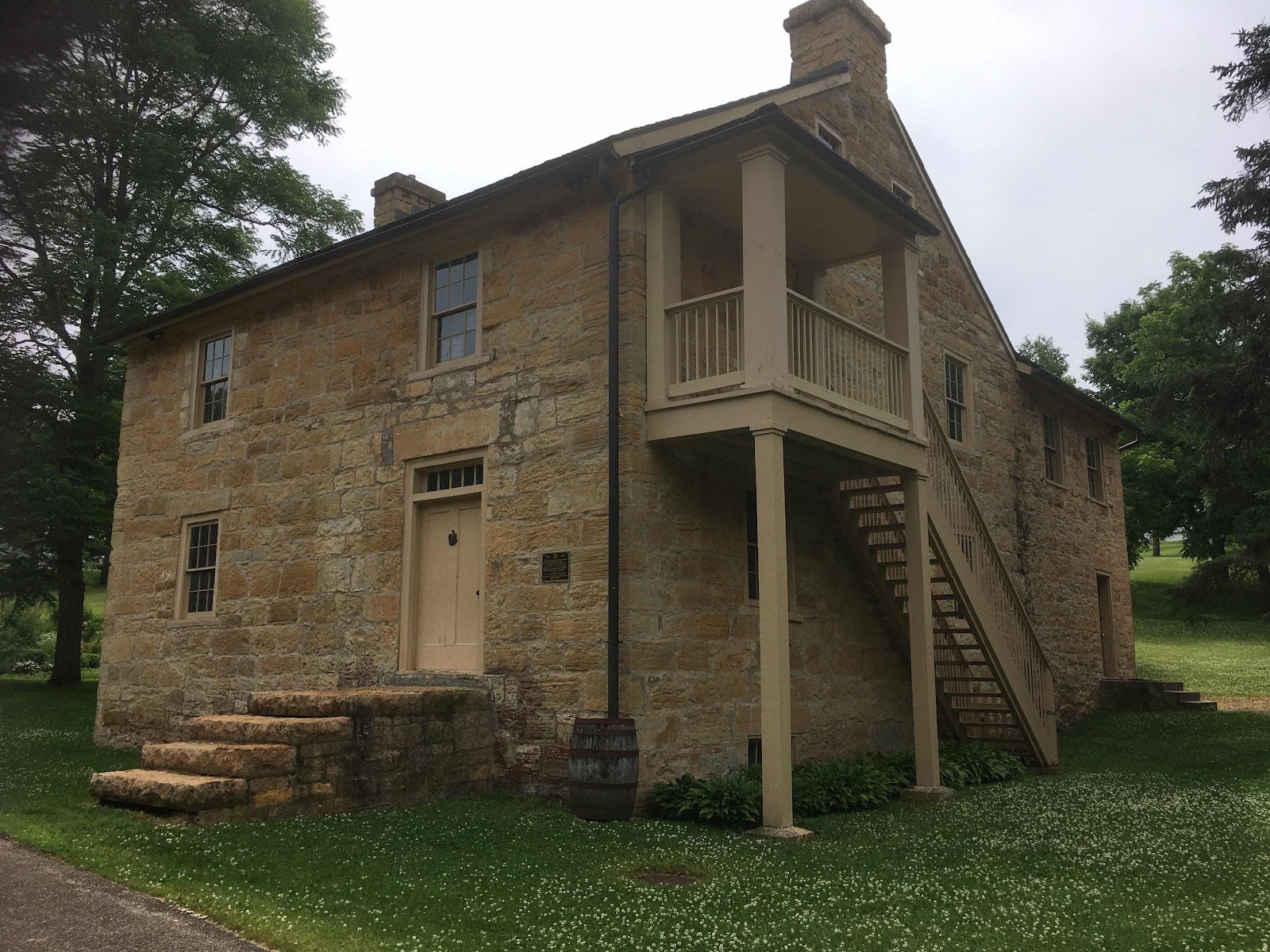 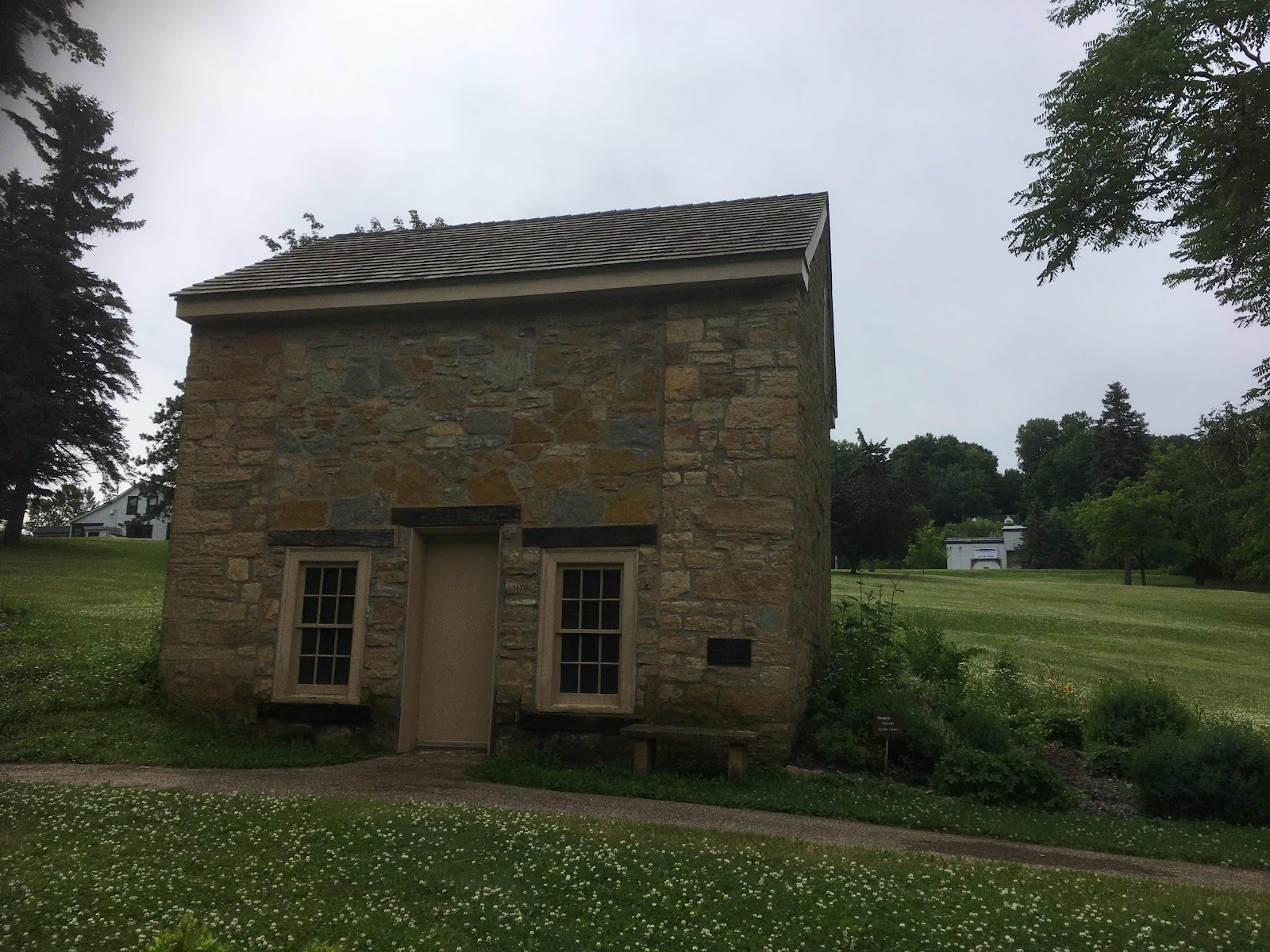 The Jean Baptiste Faribault house was the home of Mr.Faribault, a fur trader. 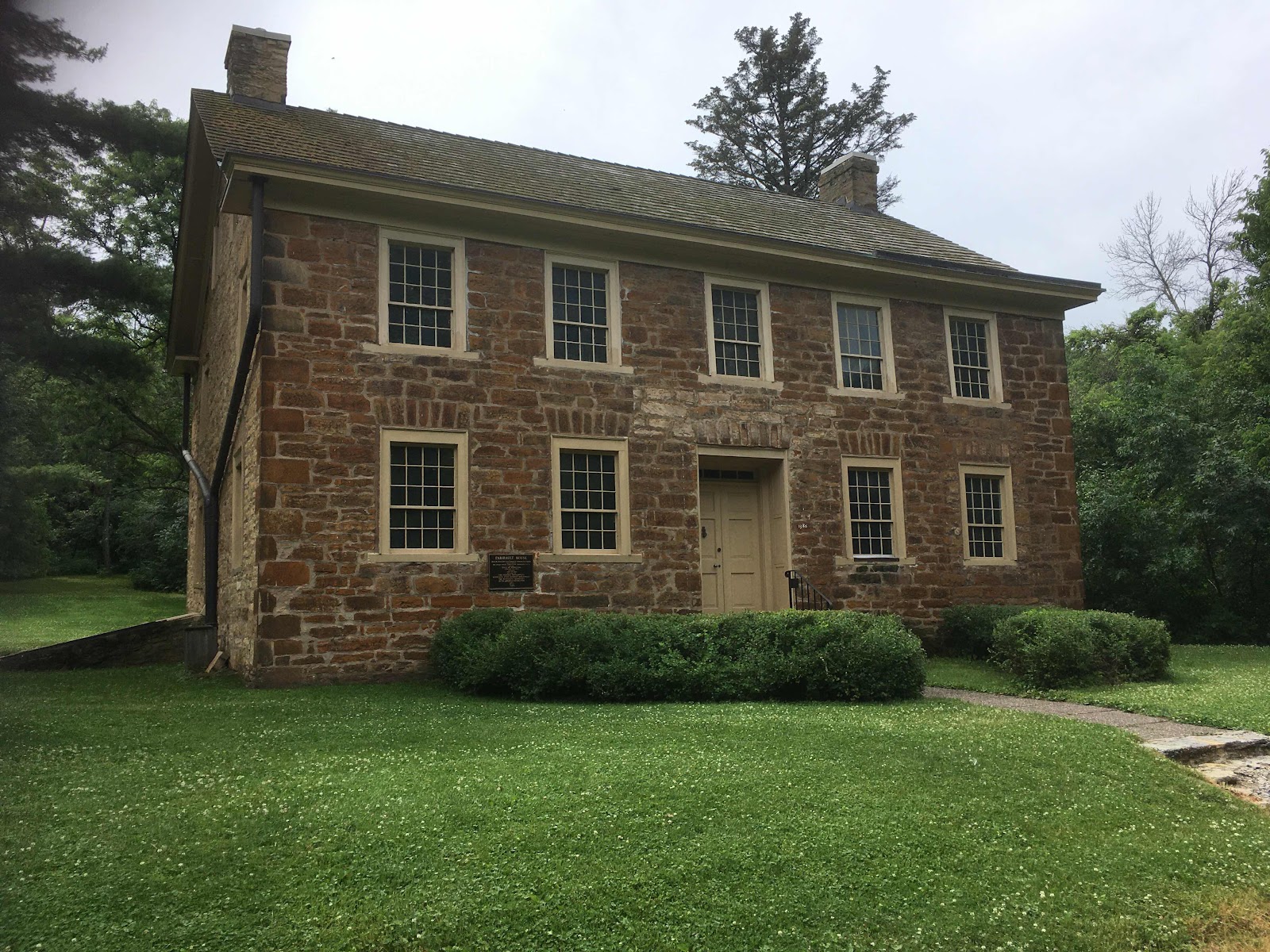 A short distance from those buildings, we came upon the old railroad bridge. The road under the bridge led to the river and what was once the Fort Snelling ferry. 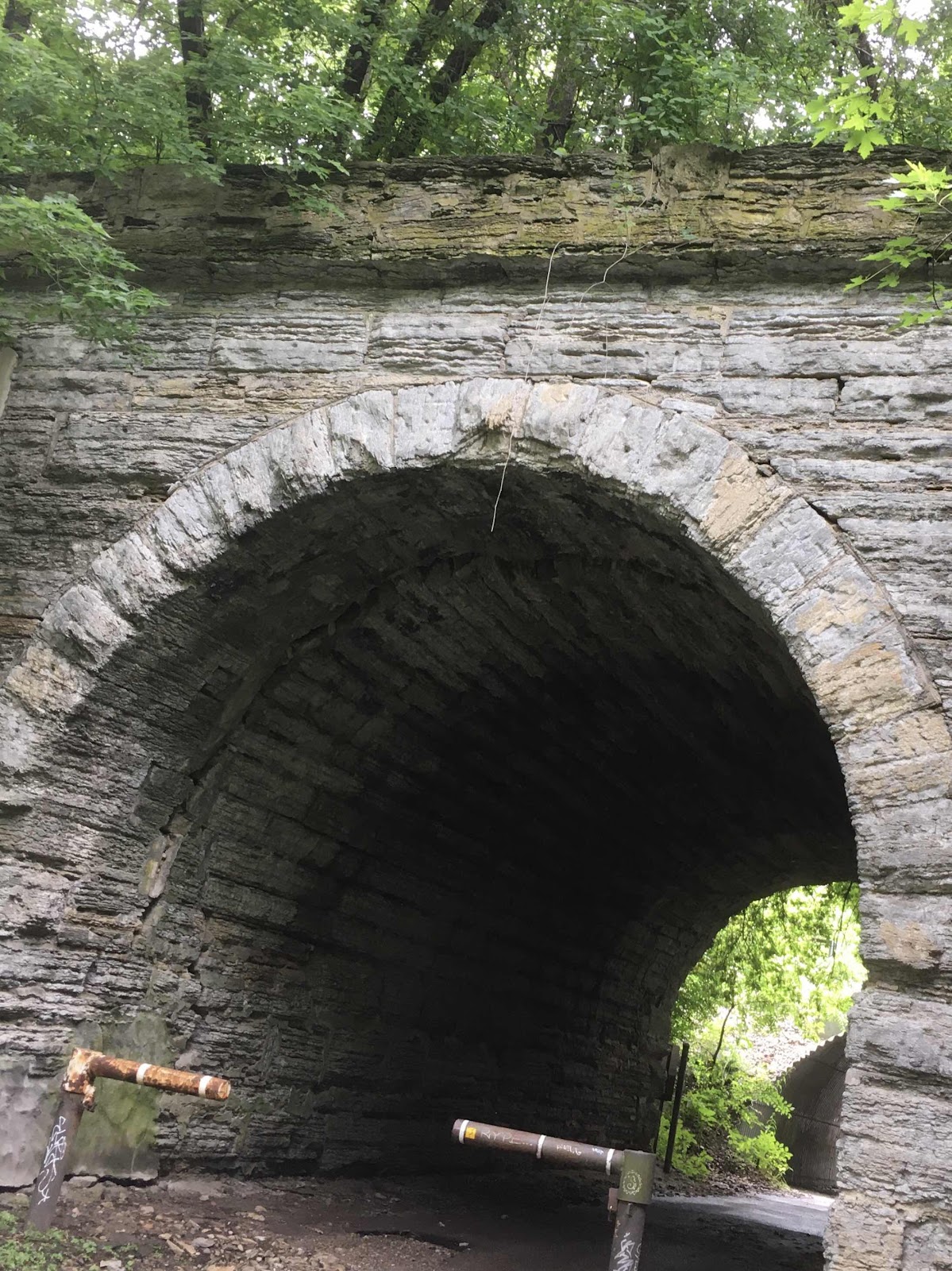 This was an interesting looking log along the path by the river. 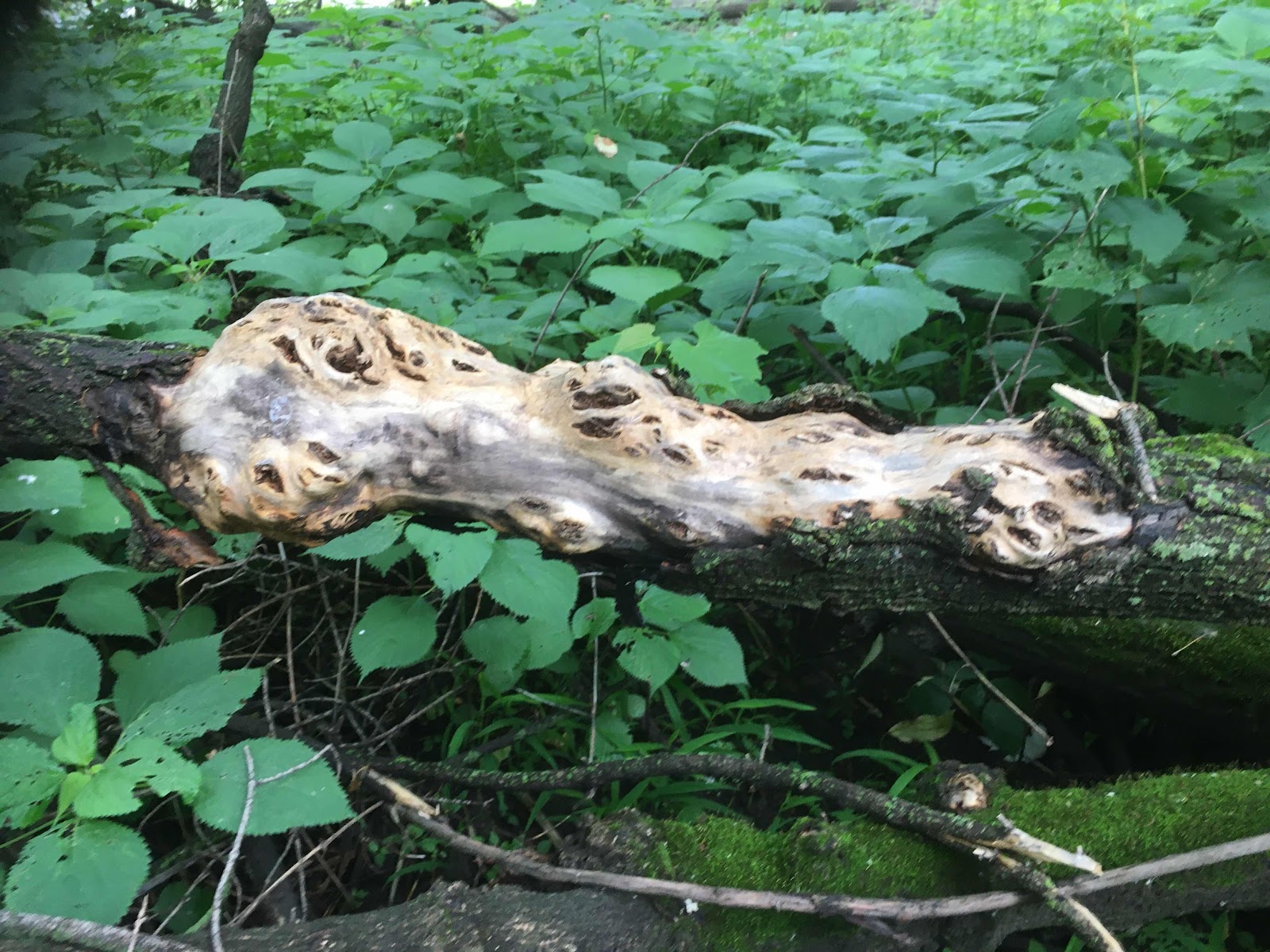 According to the map that we had, there were a few other historic sites along the Main Street, and some were just that - a site that no longer has a building on it, or the building has been replaced.  We did find the original jail building still in tact, built in 1915. 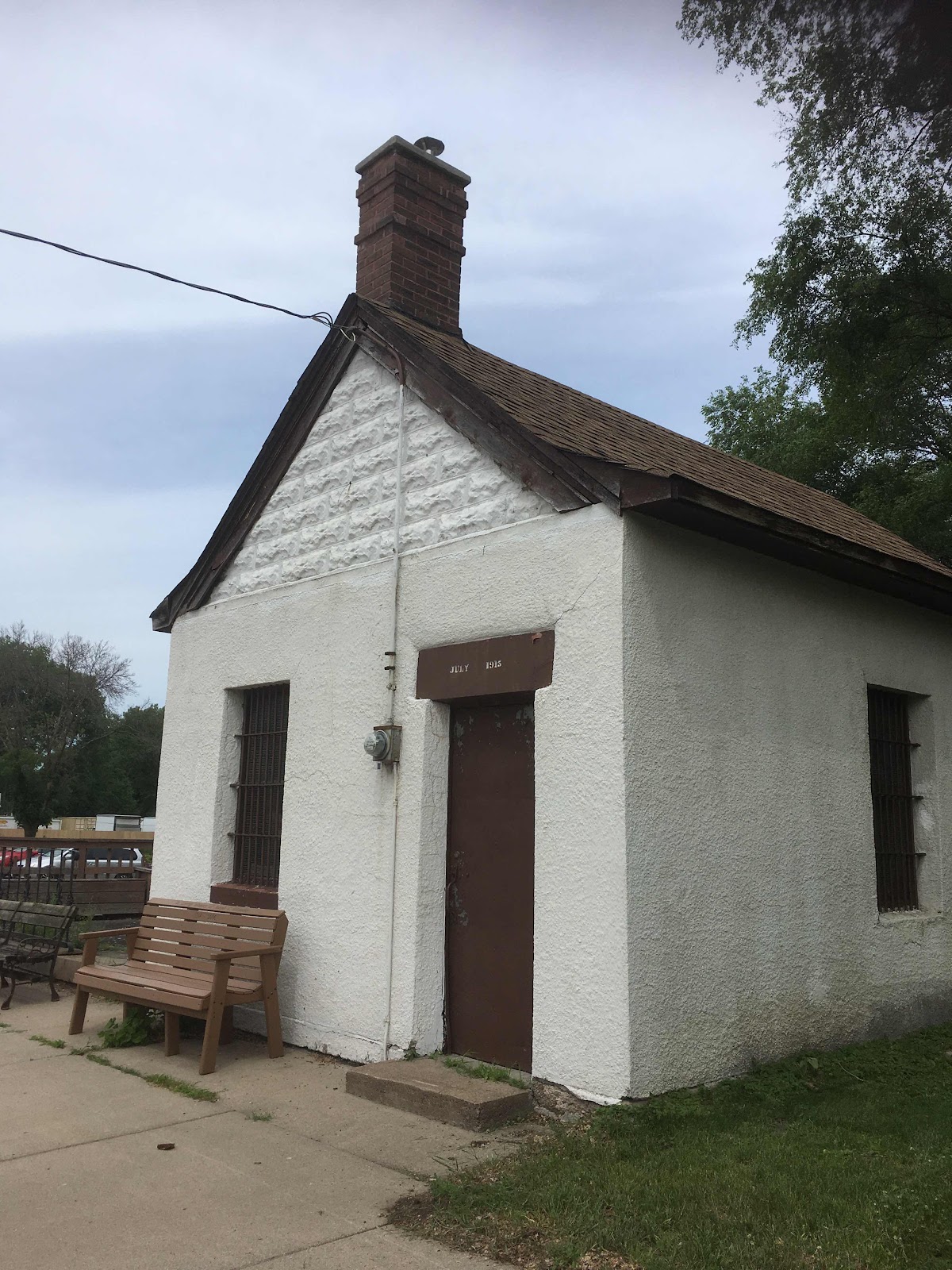 We headed back to the car and drove up the hill when I spotted another historic marker, so followed the sign that led to St. Peter’s Church - a beautiful sandstone building that was built in 1853, it is the oldest continuously operated church in Minnesota.  In the back of the church was a quiet, serene garden. 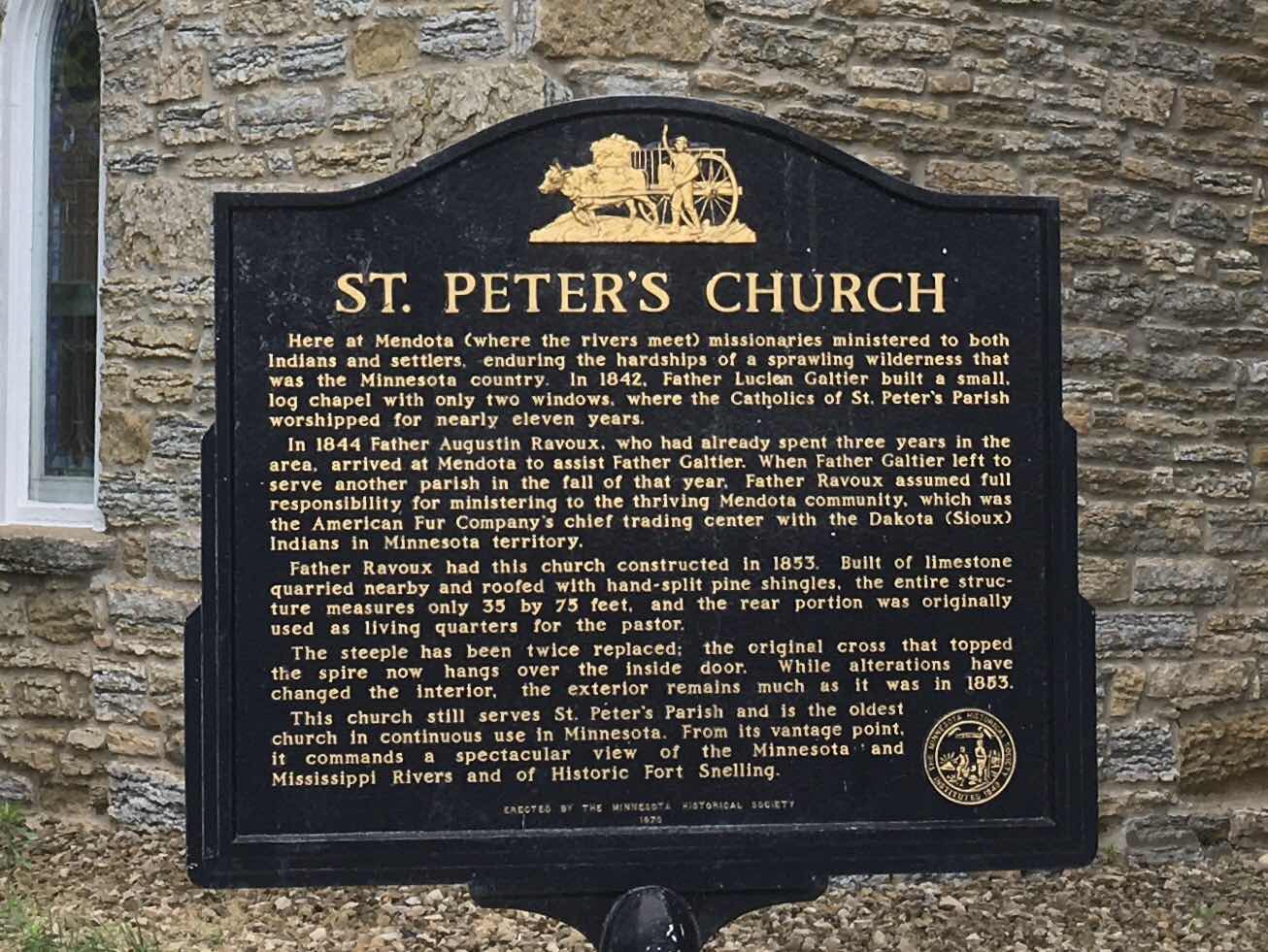 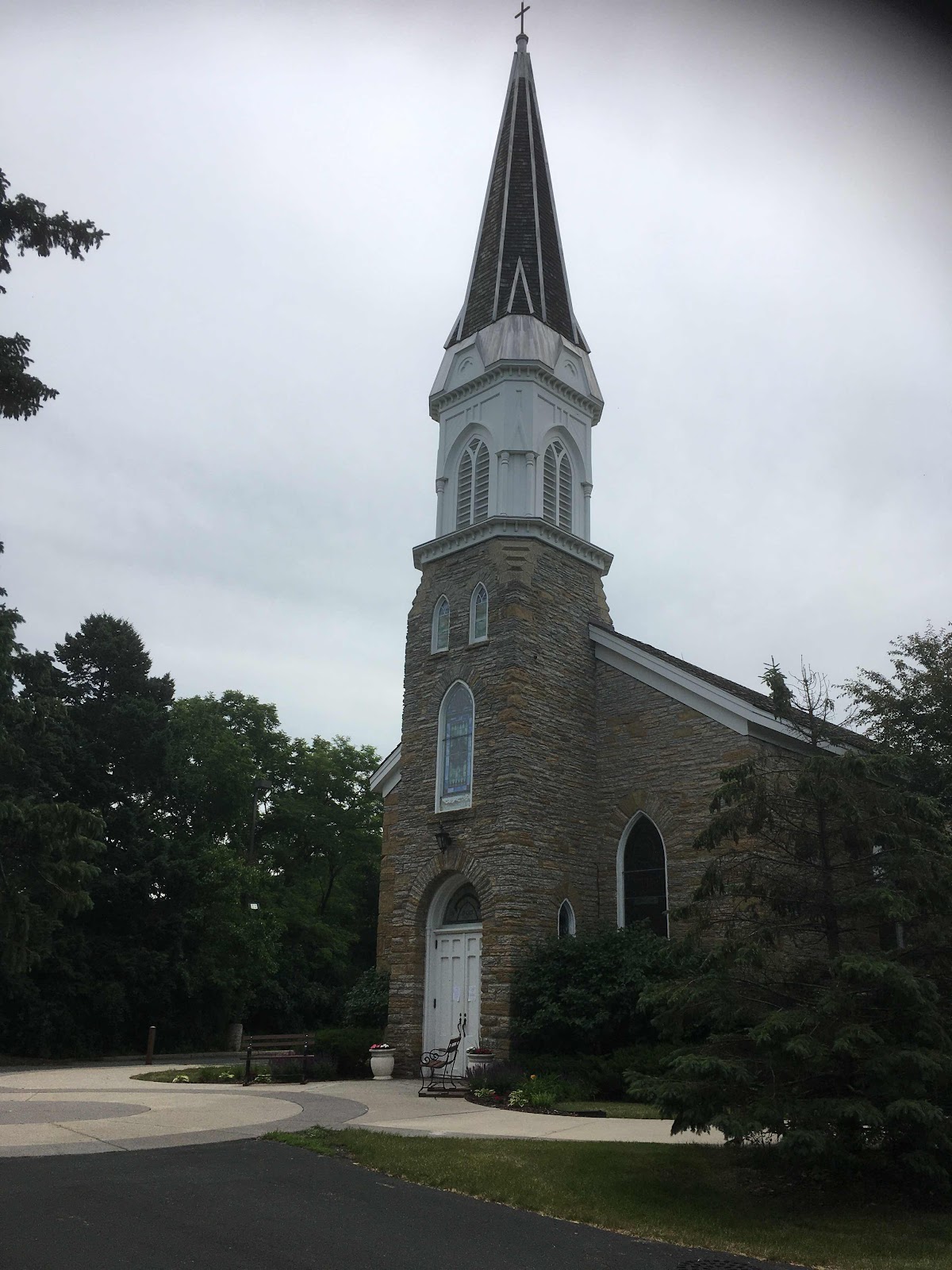 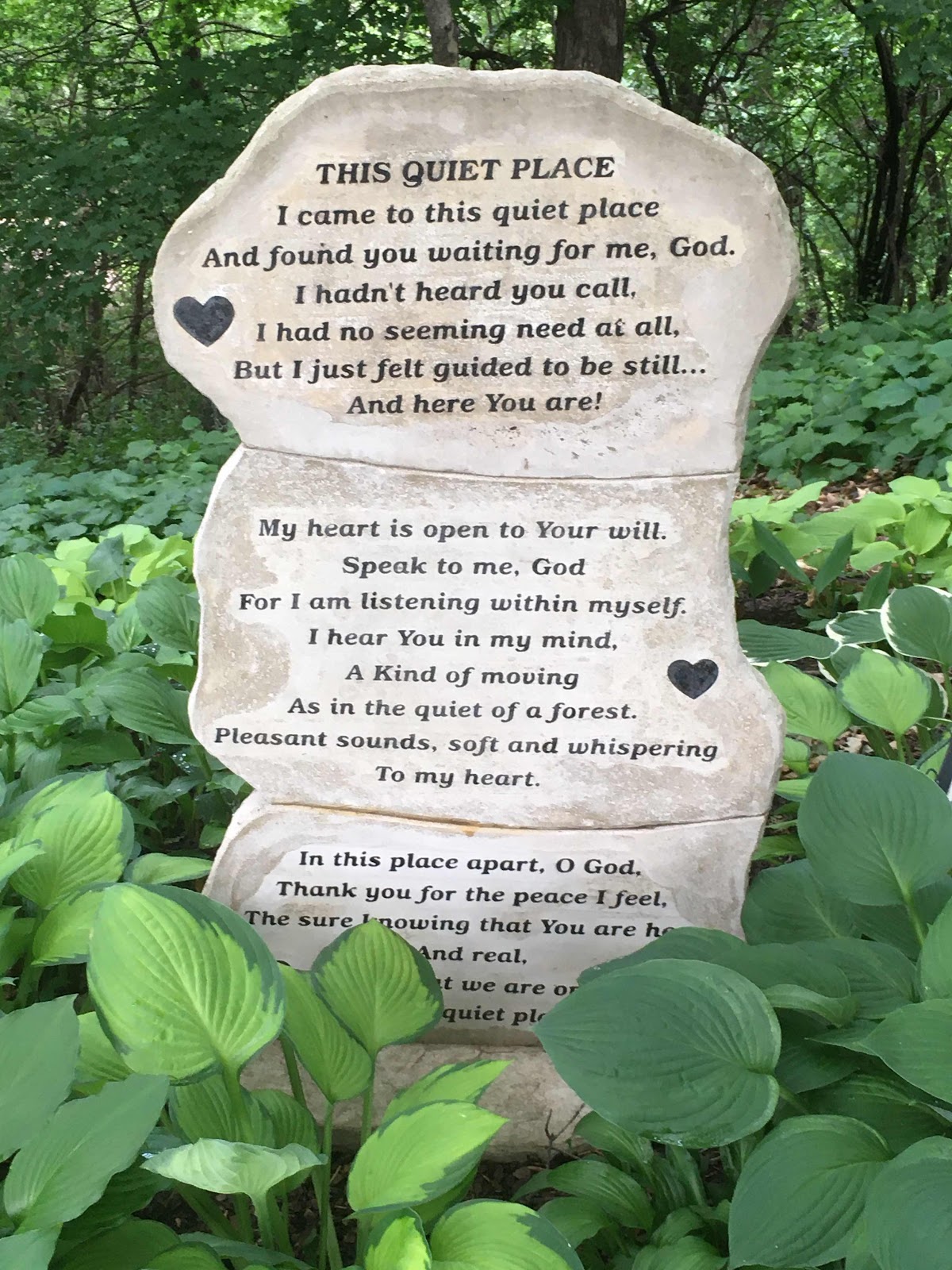 While at the church, we got to talking with a gal who recommended that we go see the Acacia Park
Cemetery and the Native American memorial on Pilot Knob (the location of the 1815 Treaty of Mendota) and was also a major hilltop marker used for navigation along the river. The city of Minneapolis is in the distance. 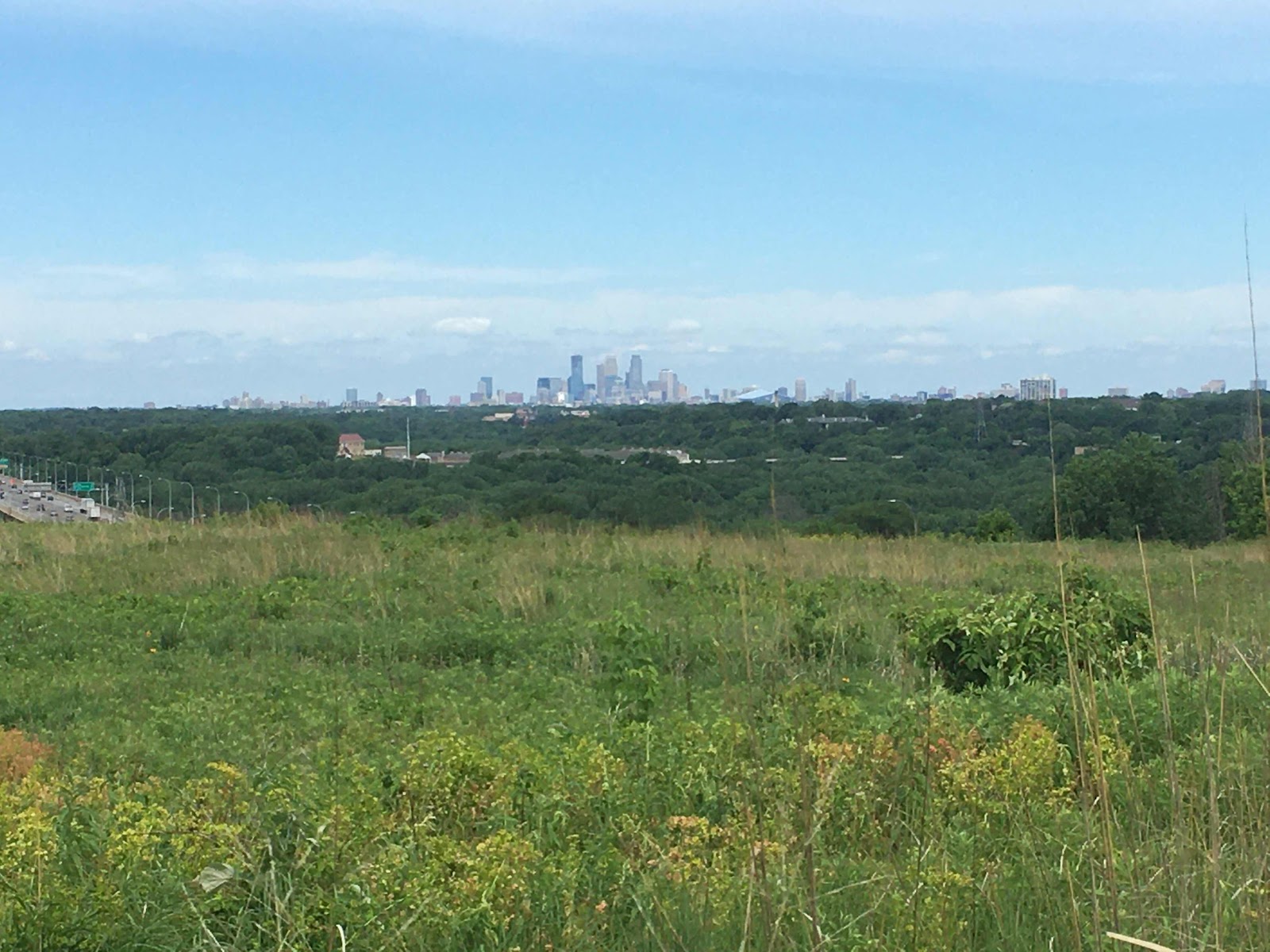 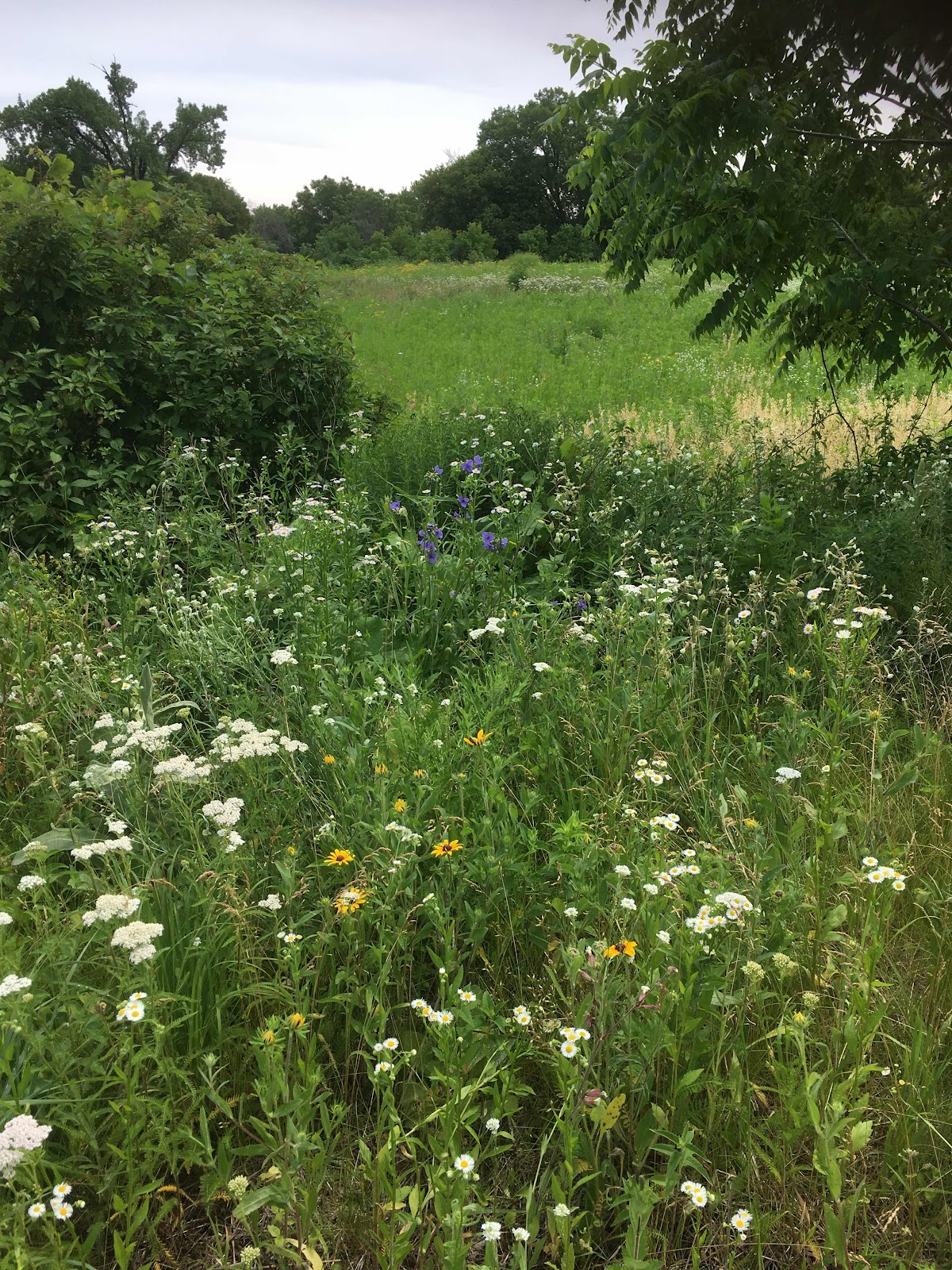 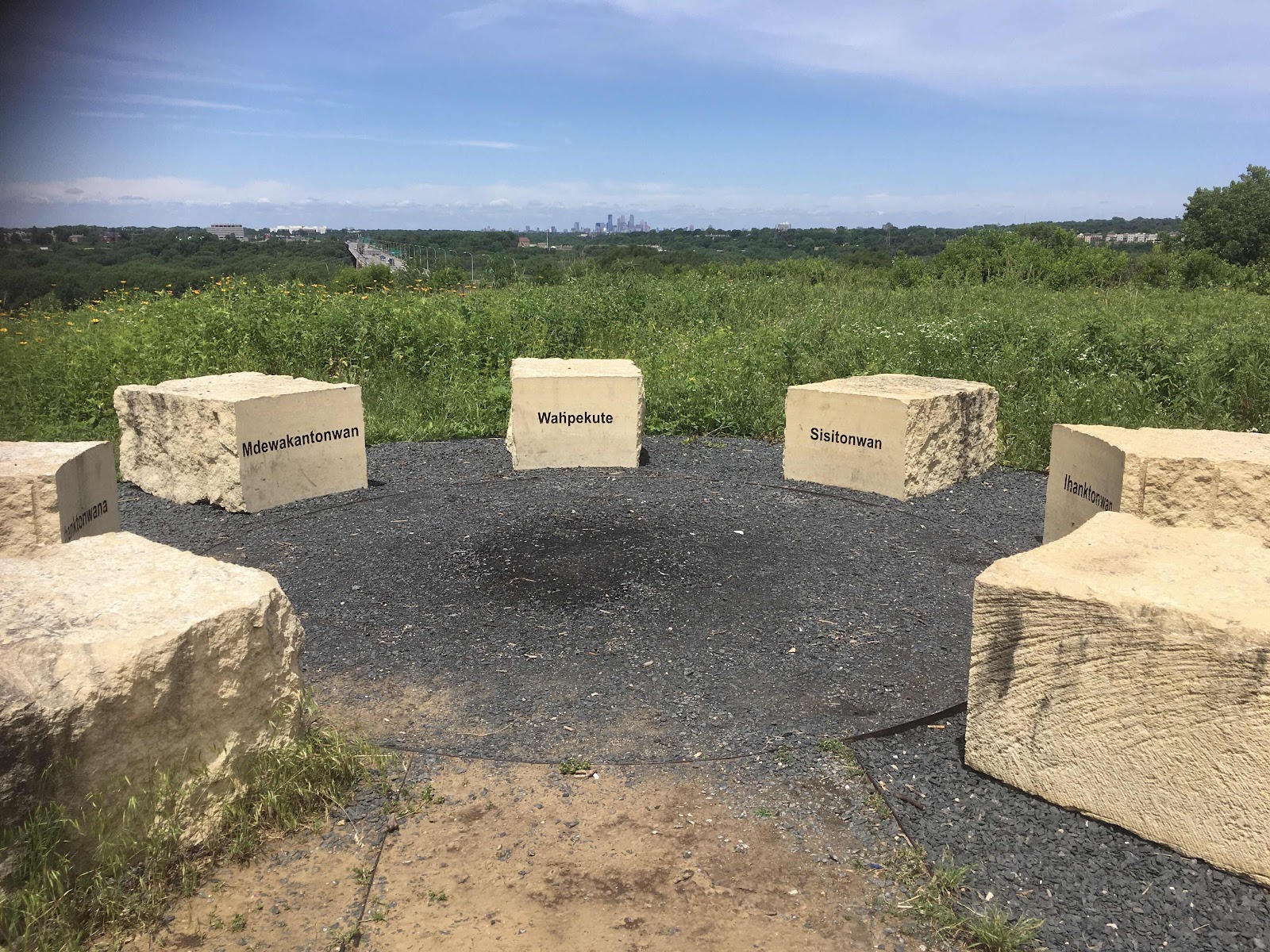 Then it was nap time.

Posted by Bridge Coast to Coast Saga at 4:20 PM