Bob and Penny headed back home on Thursday. I sure appreciate that they came up for a visit and I really enjoyed their company.
I heard from Ben on Friday that they were heading back home and would arrive later in the evening. After my morning walk with Yoshi, I did a batch of laundry, touched up on the sinks and floors and took a nice nap in the afternoon. I loaded my car and headed back home about 8:00 after taking Yoshi for an evening walk.  He is such a good boy.
My neighbors Deb and Judy and I went to the VFW again on Sunday. This time the music was rhythm and blues and there was some really good talent to enjoy. We also said hello to Deb’s friend Mike who was there drumming again.  A couple of hours was enough and it just feels good to get out and enjoy the music in an environment that is comfortable and safe.
I met with the Stampin Up group on Monday afternoon and we celebrated the birthdays of Pat and Diane and made two very pretty cards, a Holiday card and a Thank You card.  I reached out to the leader for some suggestions on how to embellish the stitched cards that I currently make and she had some good suggestions.
Tuesday was a busy day from morning to night.  I took my car to Costco in the morning to have the tires rotated and checked out - all is good there.  In the afternoon, I made a (sort of pretty) little mosaic bird at the monthly art class with Genevieve. It is always a good time and it’s fun to learn something new. 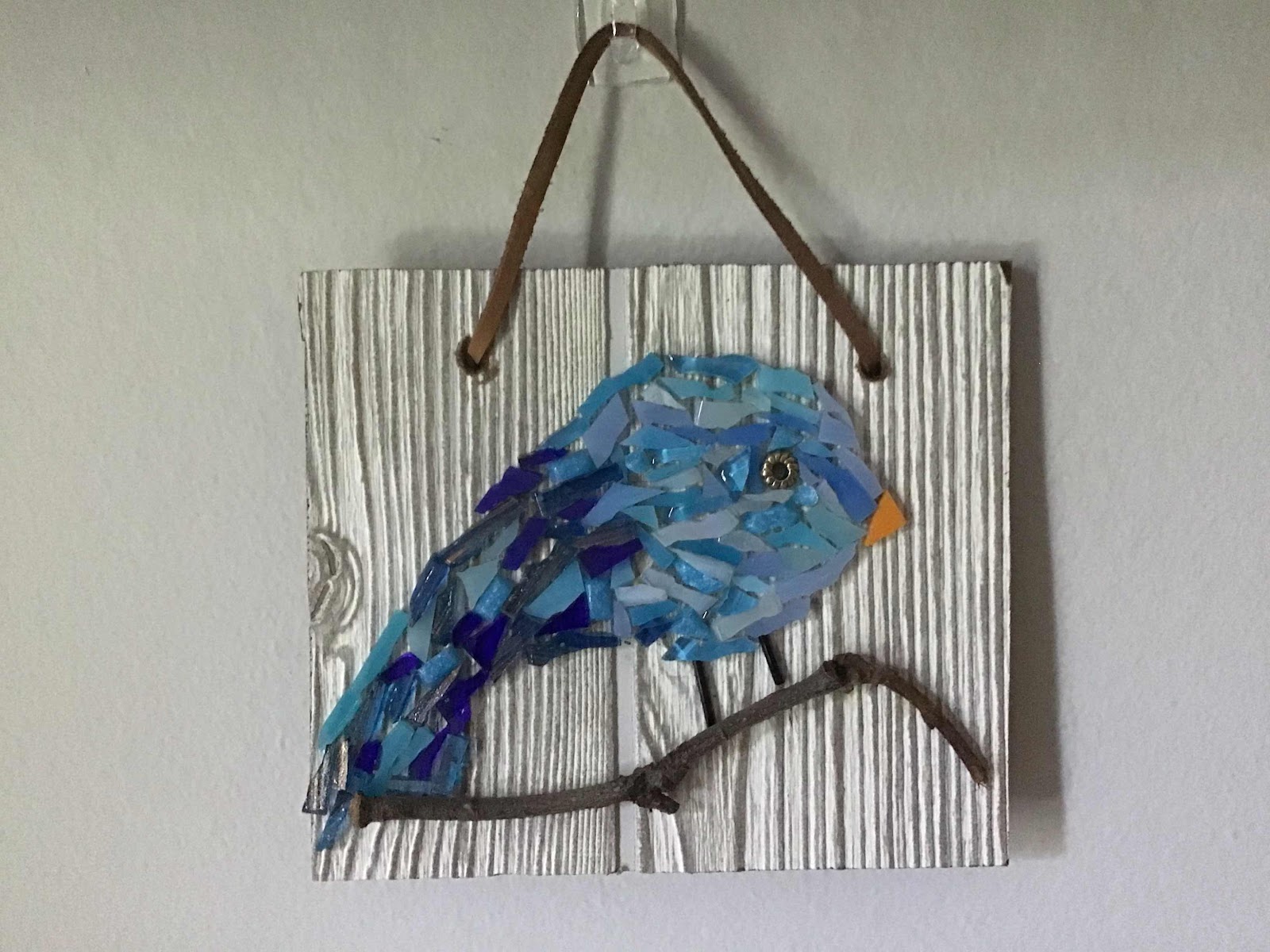 After art class, I headed off to Linden Hills Park to pick up the girls after camp.  I brought some snacks with me as they had a tight schedule and I had to get Charlotte to her to swim team at the YMCA by 5:15, then Jill fed the twins and dropped Camille off for her swim team before heading to a work meeting. When Ben got off work, he came to pick them up and we had a small window of time to visit before Camille finished and then I came back home.
On Thursday afternoon, I loaded up my car and headed to Mass City, MI for a weekend with Carol and Richard who I haven’t seen since 2019.  It was a very scenic six-hour drive that took me through Wisconsin to Wausau, then north through Merrill, Rhinelander, and Eagle River before crossing into Michigan and getting to Mass City.  I arrived about ten minutes after they did and then we talked until midnight before going to bed.

Friday was a busy day with a drive through Houghton and on through a tunnel of forest trees and outcroppings of deep, gray rock and views of sparkling lakes along the route to Copper Harbor. We drove to a scenic overlook on Brockway Mountain and got a good view of Copper Harbor,  a quaint little town with a population of 125, known as the Gateway to Isle Royale National Park.

Carole and I at the scenic overlook. 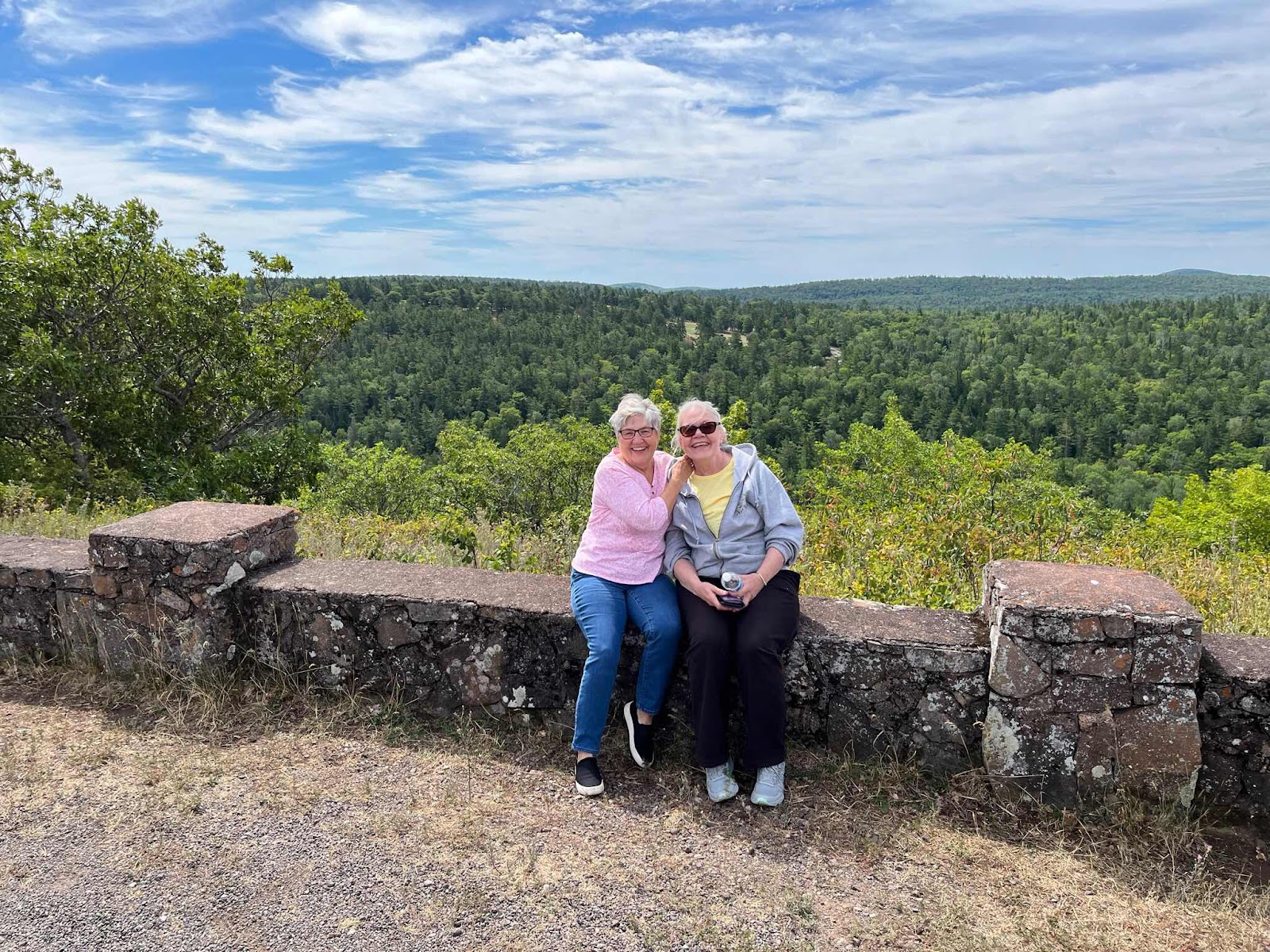 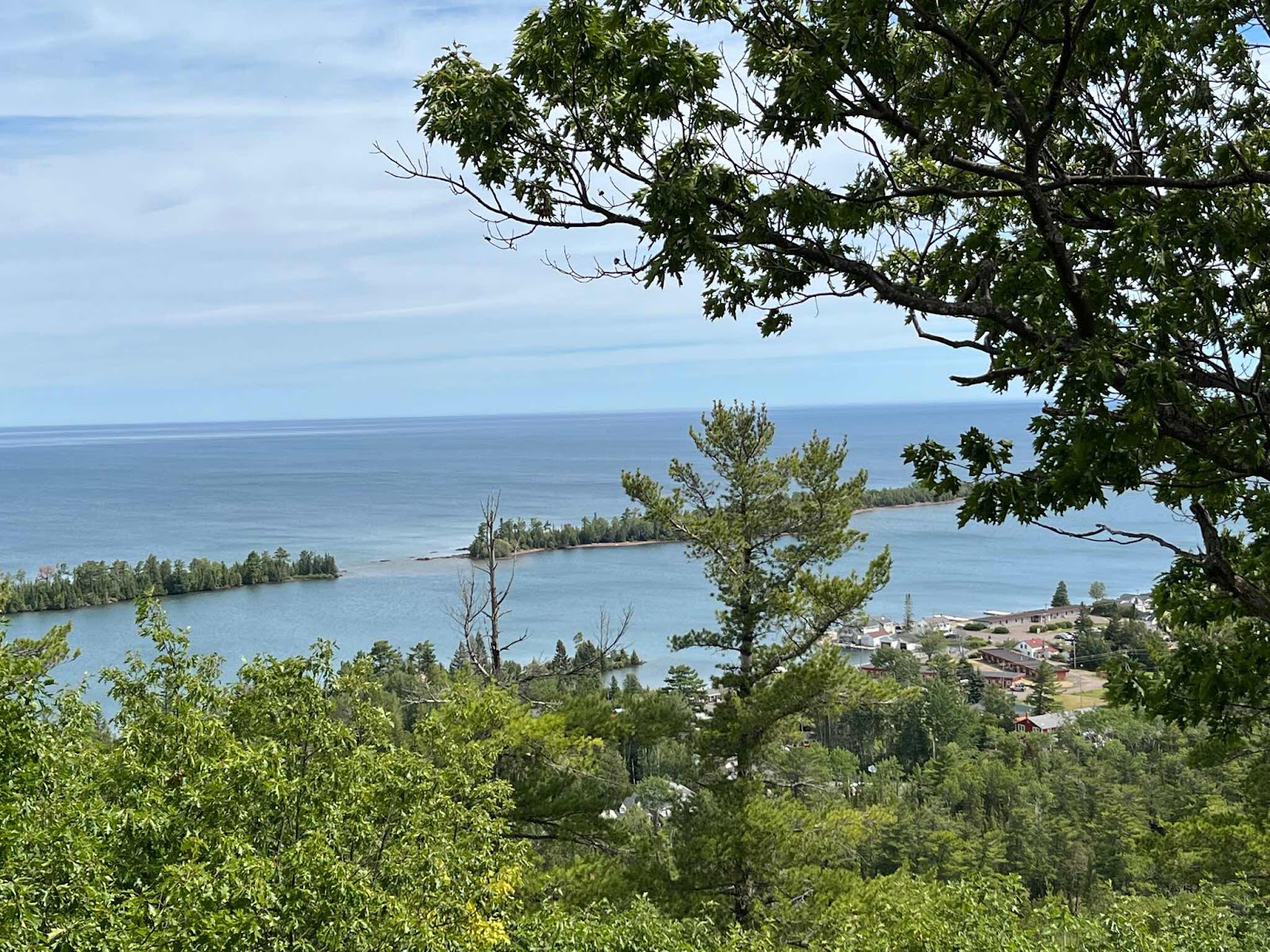 On the way back home, we stopped at Quincy’s in Dollar Bay for lunch. They wanted to take me by the Gay Bar (the bar in the small community of Gay) but the road was blocked for construction.
Their friends Jean and Tom came over for dinner and we had an evening of good conversation and I learned a lot about what life is like here in this part of the country.  Life here centers around the outdoors - forests and lakes, cabins, hunting, fishing, saunas, ATVs, and snowmobiling.  Around here, the busiest time of the year is the winter with swarms of people coming in to take advantage of the snow and the high quality trails. And that is what drove Richard to buy the place up here and he absolutely loves Michigan and I can see why - it is beautiful country.
Jean talked about her neighbor Patsy and thought that she was from Bloomington. A few text messages back and forth confirmed that she doesn’t live too far from me and would be interested in getting to know me.  What a small world it is!
Sunday was another day of sightseeing when we took a drive to the Lake of the Clouds scenic overlook and then hiked in to see several waterfalls in the Porcupine Mountain State Park along Presque Isle Road.
Lake of the Clouds 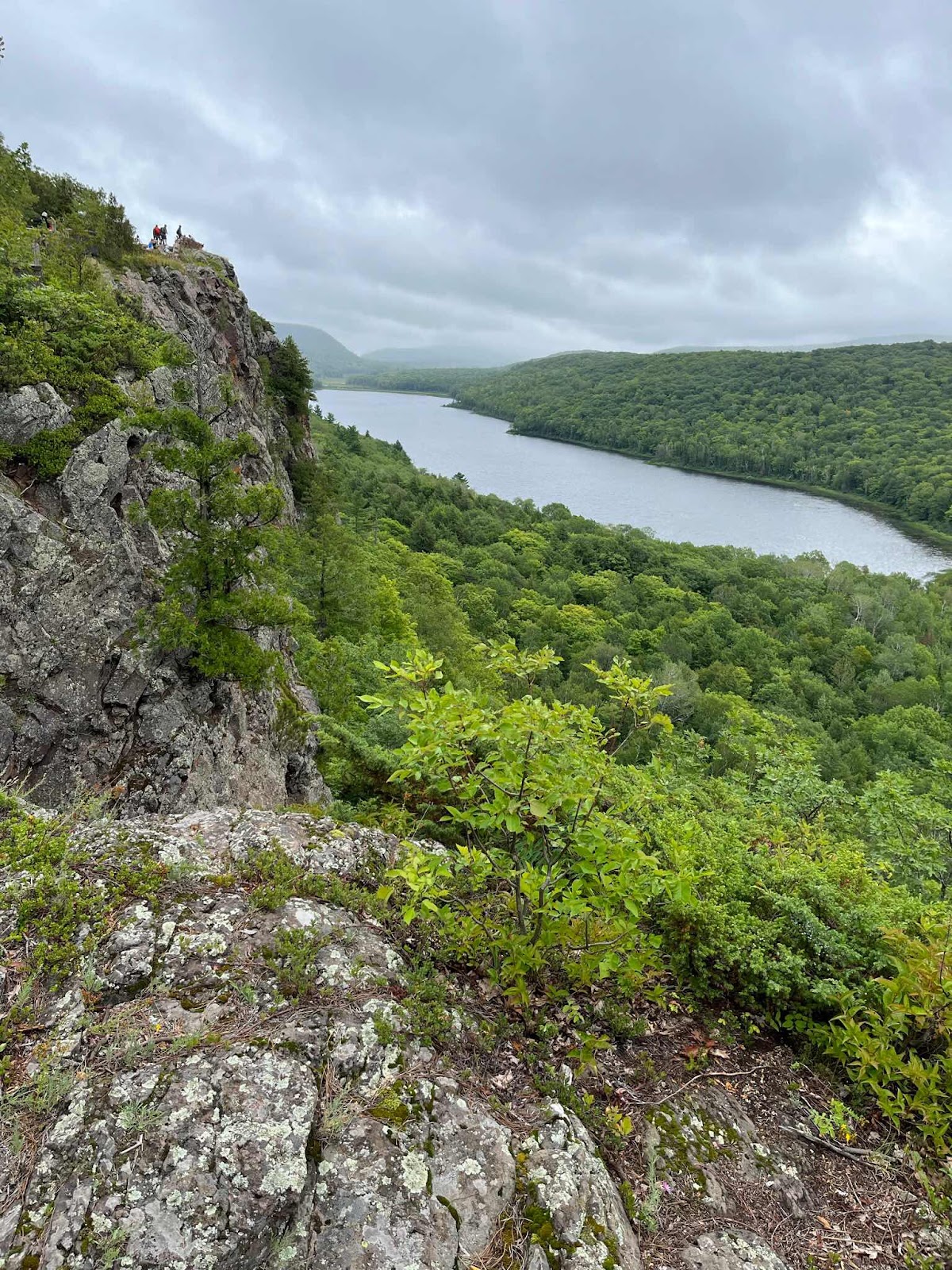 Carol and Richard at the Waterfalls 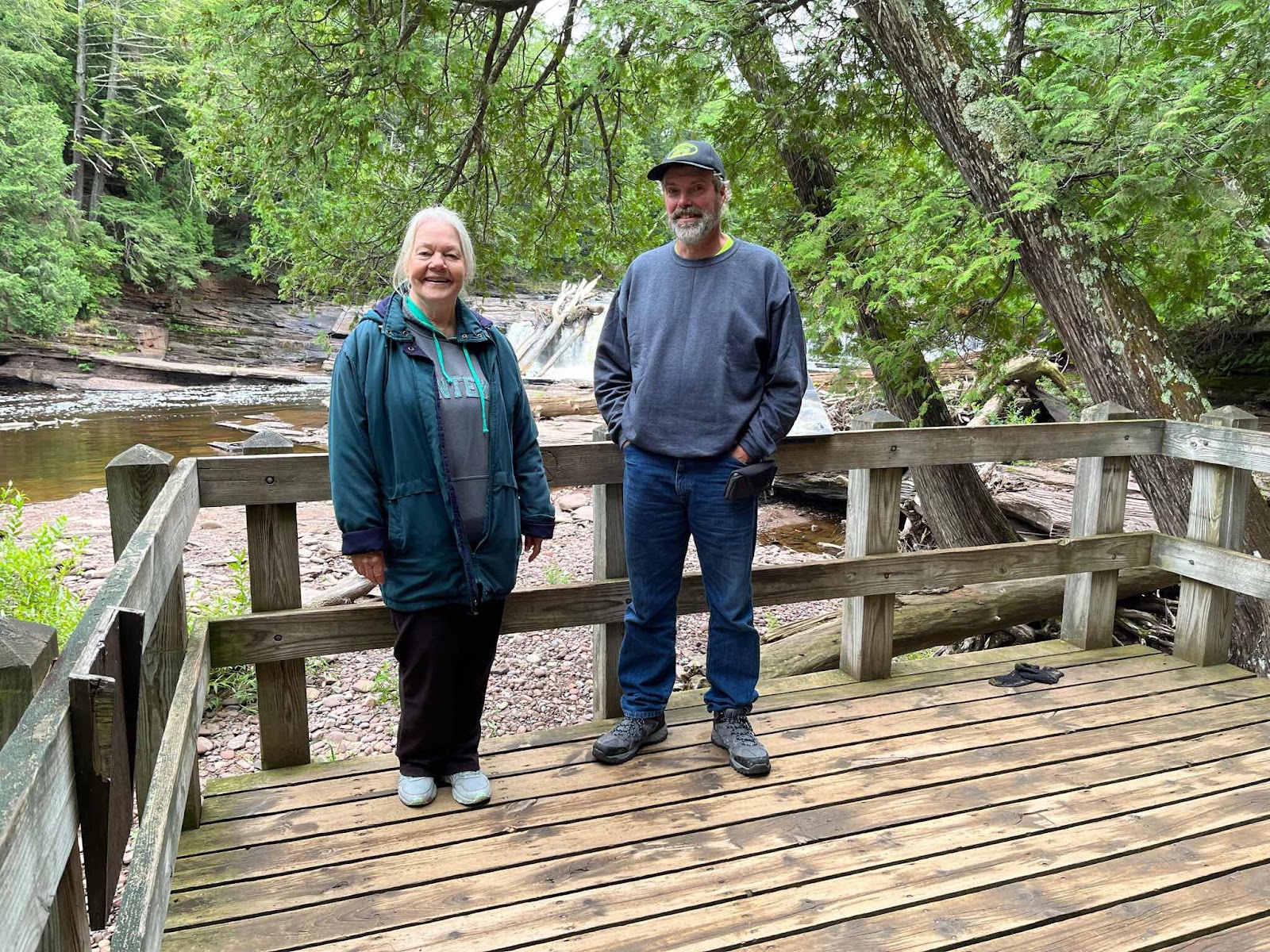 A Sampling of the Beautiful Waterfalls 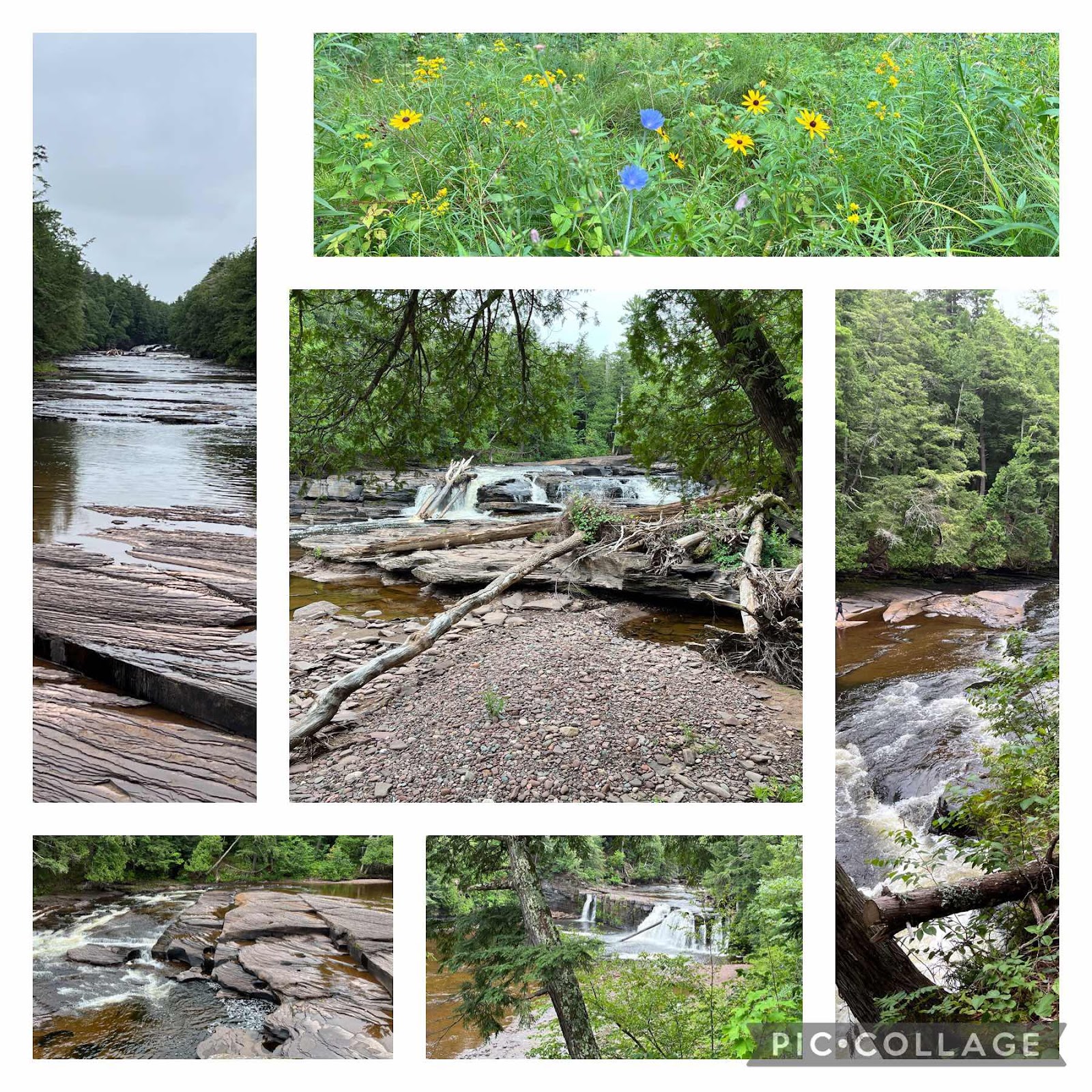 Before heading back home, we stopped at Jean and Tom’s cabin on Lake Gogebic and they invited their neighbors, Patsy and Charlie over so Patsy and I could meet.  Jean served some delicious, fresh out of the oven Oatmeal Butterscotch cookies to us.  Patsy and I talked a bit and decided to meet up some day for coffee and get to know each other better. It will be nice to have a friend who lives outside my community.
We stopped at Tieg’s Bar, a Mass City landmark, for dinner and I had a delicious Queso and Jalapeño Burger and a Keweenaw (spelled kee-we-naw) Red Jacket Amber beer.  Both were yummy. 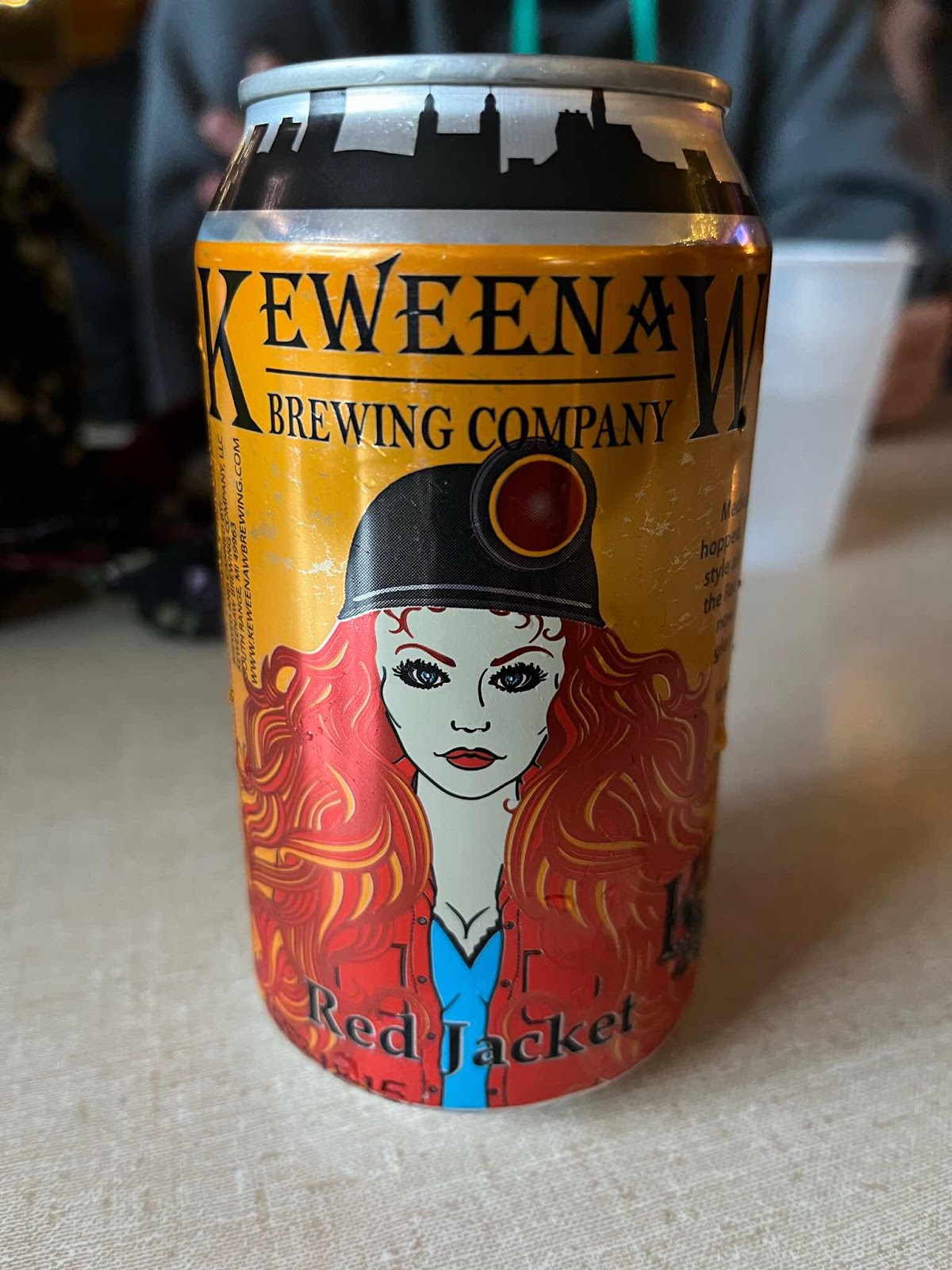 I was on the road this morning by 9 am, ready for the long six-hour drive back home.  It was uneventful and I decided that I have now seen the scenic routes and will just hit the highways in the future in hopes of shortening the drive.

Posted by Bridge Coast to Coast Saga at 3:02 PM