Tuesday, March 22.  Spring has sprung and it has brought us a bit of a cool down with lots of wind.
Today would be my Dad's 103rd birthday. I've thought a lot about him since going to Italian Fest on Sunday, about his immigrant parents and their struggles, about him growing up in the rough streets of Brooklyn, NY, about his lying his age (he was too young) to be able to enlist in the Army-Air Corps, about his living with injuries from a plane crash during World War II, and about his struggles with alcohol addition throughout his life.  He wasn't the best of fathers but his influence helped to teach me to be a good person and to be who I am, and he gave me a family that I love.
I learned today that my neighbor, Al, passed away this morning from complications of Cystic Fibrosis.  His roommate and caretaker, Kirk, got him out of a nursing home in Minnesota, moved him here so he could have a better quality of life for the last year and a half.  I've got to hand it to Kirk (a paraplegic himself) for all that he did for his friend who was also confined to a wheelchair, could no longer speak but communicated via a spelling board and text messages, and fought with the medical staff to keep him going and to get the care that he needed. Sad, sad, story.
I stepped outside this evening and caught the moonrise and the sunset - gorgeous! 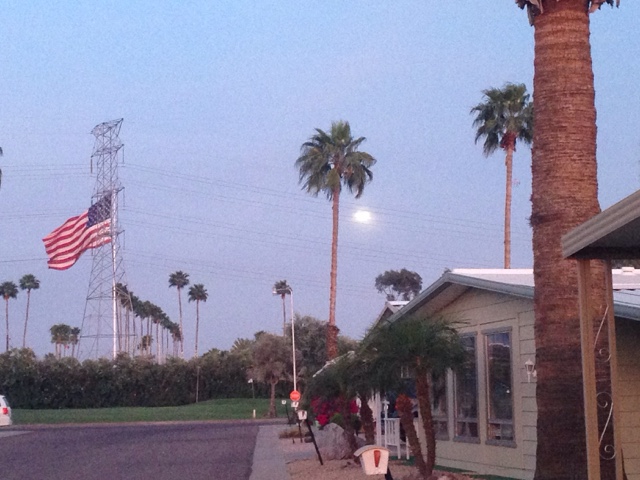 This would be such a great view, if it weren't for that darned utility tower. 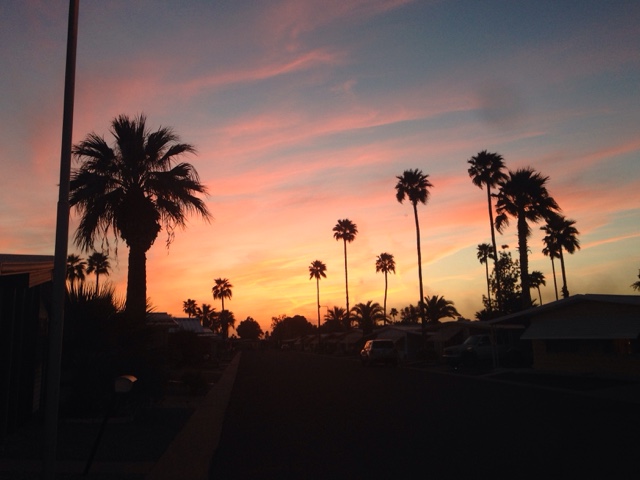 Saturday, March 26.  The 46th anniversary of my marriage was on Wednesday and, of course , that brought memories of 2 kids falling in love, me driving 2,000 miles across the country to marry my sweetheart, starting our lives together in Long Beach, CA, a year after the summer of love, the Vietnam War killing off many of our young men, Bobby Kennedy's assassination, and then a stormy, snowy road trip back home in December that year.  There was a lot going on.
My good friend and neighbor, Chuck, was taken to the hospital yesterday, a mass was found near his brain, and he was transferred to a neurosurgeon in Glendale for surgery that is scheduled for Monday.  I hope and pray that he is all right and has a quick recovery.
I met up with the Wisconsin friends, Chris and Norm, Gerry and Jeannie (actually Minnesotans), Jane and Peggy at Simpletons last night - had a fun time and the usual good fish fry.
This morning, I just felt like getting away from here, so I asked Connie and Loretta if they were interested in a drive to Globe to explore the historic district and maybe see some wildflowers along the way. We lucked out on that in Miami where there were drifts of colorful poppies along the roadside.  We stopped at the visitors center and museum, learned a bit about the town, got a recommendation for a quilt show, art exhibit, and the Copper Hen for lunch.  The quilts were beautiful and I loved the architecture of the historic building where the show was held - the former courthouse.  And the Lunch was delish.  It felt good to get away.
Sunday, March 27.  Happy Easter!
Posted by Bridge Coast to Coast Saga at 7:12 AM