Friday, August 3.  Backtracking.  Wednesday was R & R and laundry day and we got off to a later start than usual. Two sets of bedding (we've had guests), towels, and 8 days of clothing made for a 3-load session today and we had to wait for machines to open up. I was puzzled when, for the second time, I had 2 t-shirts come out with a reddish stain around the collars and a tan towel that also had the same colored blotches on it. Was it something in my body chemistry? Something that I put on my skin? Other items don't have it? Is it the water? Is it the laundry soap resting on the item?  I have no answer but I now have a third shirt to replace.

Later on, while I was cleaning the shower, I noticed a small buildup on the walls of the shower, near the floor - the same color as the stain on my shirts.  Now, I'm beginning to think it might be the water? But why only on the collars with the exception of one towel?  Who knows?  I guess I won't be wearing white shirts any more while I'm here.

We got our chores done, had leftover pizza for dinner, and relaxed outside until dark.

On Thursday morning after another late start, we headed for the Maple Grove Arboretum and walked the trail along Elm Creek for 1.5 miles, then headed back the same way, a total of exactly 3.0 miles when we got to the car.  It was a nice, cool, hike with some interesting scenery along the way.  I love the canopy of trees along the trails here.

After our hike, I headed to the Kohl's store in Rogers to shop for t-shirts to replace those that I have damaged in the laundry.  It took me 2-hours to shop and I walked out of there with 3 items - you  know, you have to look at everything in the store before making a decision. I was very disappointed in the condition of the store; nothing was organized, sale racks were messy, fitting rooms were full of clothes and messy, and there wasn't an employee in sight if you did have a question. I won't return there for a while.

Today, Pat and Roger came to visit and we will be celebrating her 70th birthday this weekend. I'm so happy that they decided to be with us for this occasion!

Sunday, August 5.  Happy Birthday to my dear friend, Pat who is now the same age (number) as me!  She and Roger arrived here on Friday afternoon and we sat around talking until they headed off to check into their hotel, about 20 miles from here.  It's so good to see them!  Later on, we met at the Villa Bar and Grill a few miles north of here.  I ordered the grilled Walleye and it was huge - hanging over the plate and only a dollar more than the cod fish fry - well worth it! It was delicious! Everyone else was happy with their dinners too.

Yesterday was a rainy afternoon and we had to go to Plan B (a movie) instead of Plan A (the Hanover Harvest Festival).  We saw Equalizer 2 with Denzel Washington and it was suspenseful, action-filled, and managed to keep you interested throughout the entire movie.  We topped the afternoon off with a cocktail and dinner at Mama G's.  We said goodbye and they headed back to their hotel.

The night was beautiful so I got a fire going and we tended and watched it for a couple of hours - nothing like good old Campfire therapy. 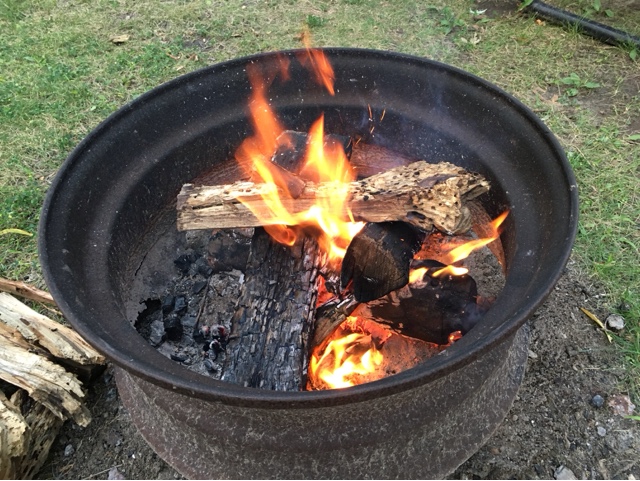 At 4:45 this morning, I was awakened by the sound of a bird - an owl? I checked to see if I could spot it out the windows and laid there listening for about an hour, then it flew off and I could hear it off in the distance.  Yes, I regretted that I didn't go out outside to see if I could see it.  This morning, I did some research and learned that it was a Great Horned Owl - then I really regretted that I hadn't checked it out. It would have made for the 2nd Great Horned owl that I had seen in my life.

My first sighting was on Rutland Dunn Town Rd in Stoughton. He was perched on the ground in the middle of the road, then flew right over our truck as he parted.  The wingspan appeared to be as wide as our truck.

Posted by Bridge Coast to Coast Saga at 12:49 PM