Wednesday, August 8.  Tom and I decided to take a road trip this week, arranged for Ben and his family to watch Frisco, and headed out this morning to southwest Minnesota to visit Pipestone. We checked into our room at the Grandstay Hotel, got organized, did a quick auto tour of Pipestone, then drove on to check out the town of Luverne, about 30 miles south.  On the way there, I learned that nearby is the town of Edgerton, on the Rock River, in Rock County, MN - much the same as the Edgerton in Wisconsin, near my hometown of Stoughton - in Rock County and on the Rock River.

We stopped in at the Howling Dog Saloon and I had a pint of the Take 16 Brewing Company's Country Mile Pale Ale that was quite tasty and Tom's choice was a domestic brew.  The bartender brought us a lighter lager and an IPA to try and I was glad of the choice I made.

After checking out the historic downtown, our next stop was at Sterling's Cafe & Grill, located in a cool looking historic building right on Main Street.  Tom chose beef tips in mushroom sauce and I opted for shrimp scampi - both dishes were yummy. 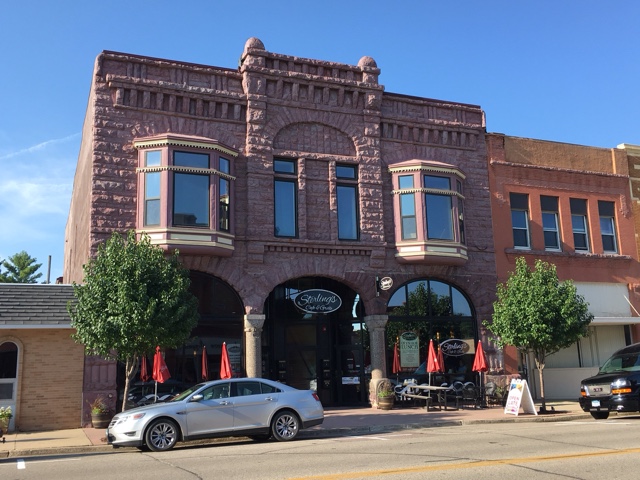 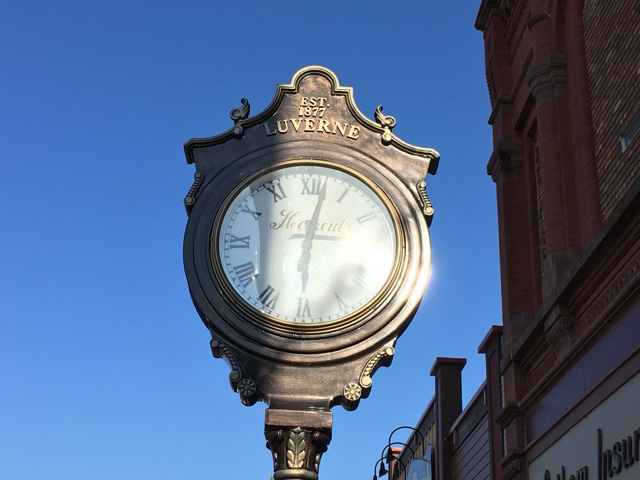 On our way back to Pipestone, we stopped at the Touch The Sky Tallgrass Prairie, walked a mowed trail and got a good feeling for how immense the prairies once were (covering 400,000 square miles), an ecosystem stretching from Canada south to Texas and the Dakota's east to Indiana - only about 1% remaining today. 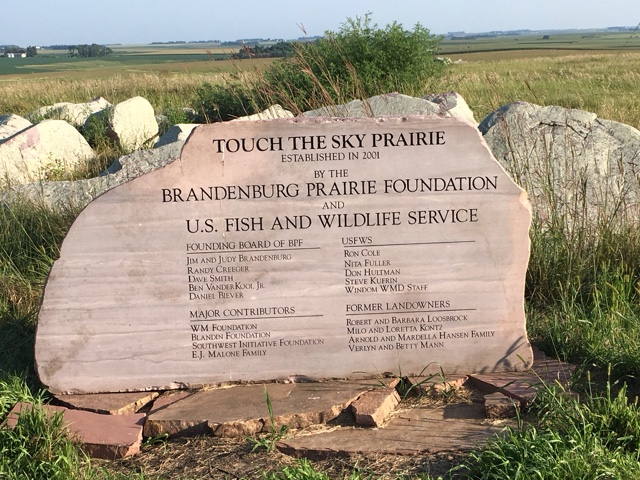 Thursday, August 9.  We decided that we had better get going fairly early this morning, as we were exploring the Pipestone National Monument and it is predicted to be a hot day.  Arriving just in time, we were able to get in on the next ranger-led hike, starting in just a few minutes.  The tour led us to many hidden gems that you would never guess would be found there. We learned that the Pipestone is quarried (mined with a pick axe and hand tools) and is located under several feet of Sioux quartzite, meaning that all of that quartzite has to be removed before they get at the pipestone. The pipestone is softer than the quartzite (the hardest stone in the world), and can be carved into pipes used for sacred ceremonies by the American Indians (they prefer to be called this now, rather than Native Americans).  They are the only ones allowed to harvest it and must apply for a permit to do so.

There were huge outcroppings of the giant red boulders throughout the area that is considered to be a place of peace - it actually gave you a peaceful, calm feeling. Large trees, the Pipestone Creek, and Minnewissa Falls were some of the surprises along the one-mile trail.  When the ranger led hike was finished, we walked along the quarry trail and were able to see some active quarries, although nobody was working them, as they all had standing water, a result of the recent, heavy storms. 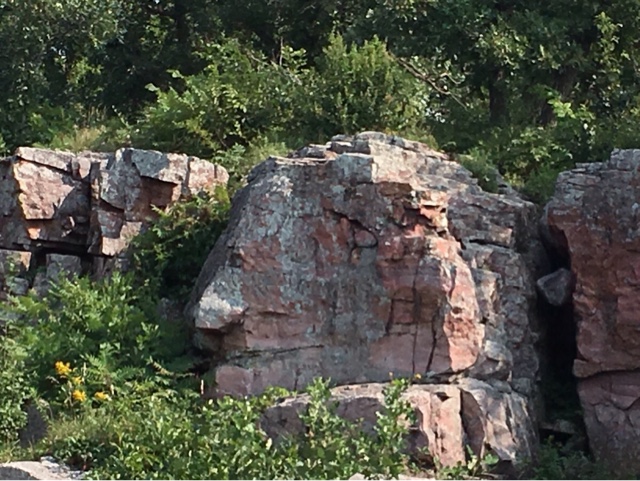 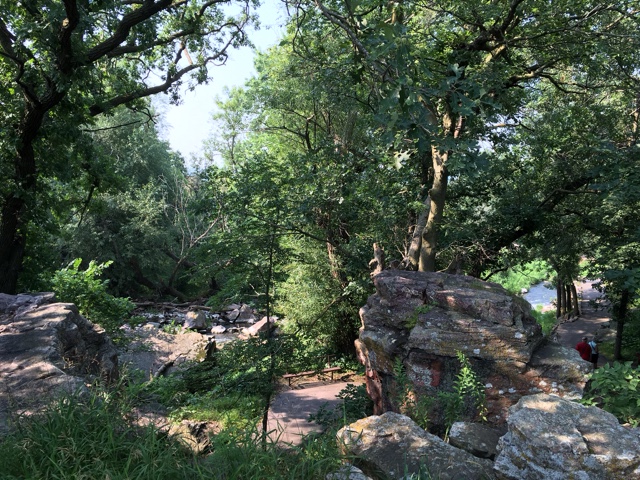 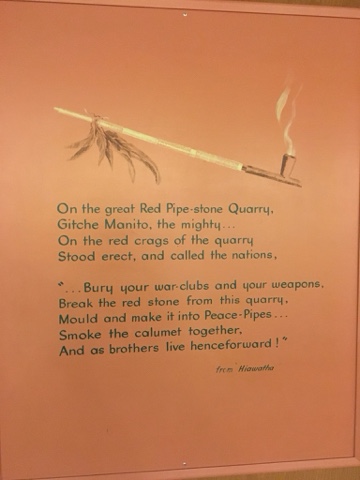 The day was still young, so we headed for Blue Mounds State Park, known for their herd of American Bison. Lucky for us, the ranger told me that the Bison where hanging out along the fence by the observation deck, so we headed right there and saw a good sized herd.  We then took the Upper and Lower Cliffline Trails, saw a few little critters, most of which were moving too fast for us to ID. There were several frogs that jumped across the path as we were hiking, one even brushing against my ankle. 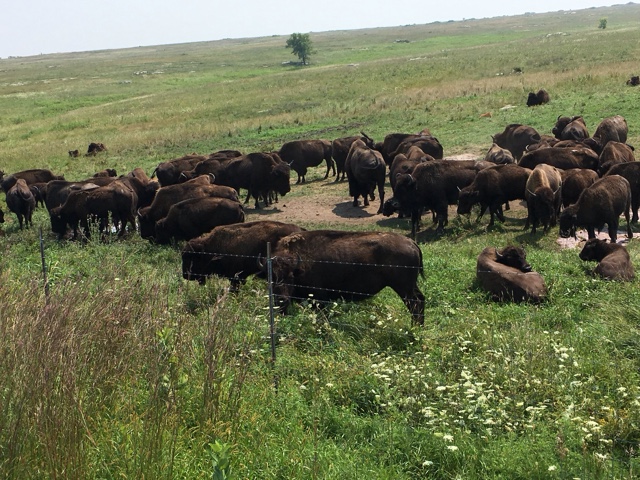 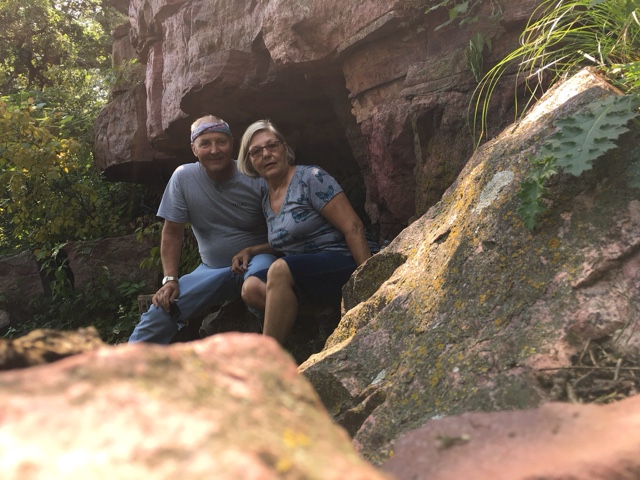 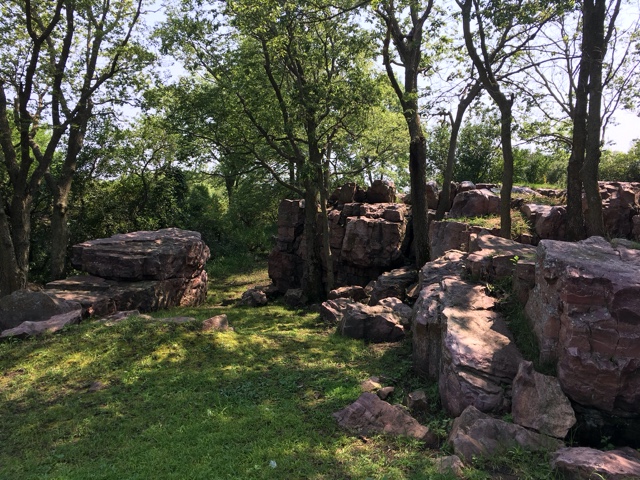 We opted for the only Mexican Restaurant in town and had a very good dinner again tonight.

Friday, August 10.  After breakfast and checking out of our hotel, we headed back to the Twin Cities, taking an alternate route.  MN 30 took us straight east, a nice road and we just happened to see a sign for the Jeffers Petroglyphs and headed in that direction.  Again, our timing was just right, as a tour was just starting, although we had to hightail it there to catch up.  We learned that this is another tallgrass prairie land with large outcroppings of the Sioux Quartzite that we had seen back in Pipestone, dotting the land. It is believed to be one of the oldest quartzite formations in Minnesota, deposited as sand 1.6 billion years ago, formed by heat and pressure deep within the earth.  It is considered a sacred place to the American Indians, where their ancestors left carvings in the rocks, back 250 years ago.

Many of the carvings were of thunderbirds, turtles, deer, bison, and humans. Unfortunately, the angle of the sun has a lot to do with the ability to see the detail, and mid-day is not the best time, but we were able to pick out a few of the estimated 4,000 different carvings as we walked along the boardwalks and roped pathways of the rock beds.

Once again, it paid off to get off the beaten path and we were both feeling thankful that it was an activity that we both enjoy doing.

We got back to Ben's in time to play with the kids and have his delicious homemade pizza for dinner again. As we were driving home, the sun was setting and it was a huge orange ball in the sky, probably due to the smoke, carried on the wind currents, from huge fires in Manitoba. 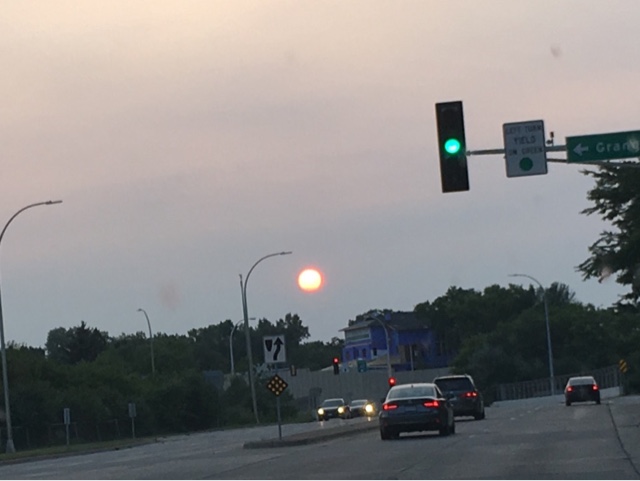 Sunday, August 12.  Hanging around the RV Park was about it the last 2 days.  Tom sorted through some paperwork yesterday while I went to a few garage sales.  They were few and far between but I got my fix.  Other than a bit of shopping today, we didn't do much - and it felt good.

I did connect with Pat, Pat, Rita and Bob, learning the news of the family and just plain hearing their voices was nice and gave me a nice, feel good feeling.

Posted by Bridge Coast to Coast Saga at 6:42 PM