It felt so good to not have an agenda today and I got a great night’s sleep. The continental breakfast here was very nice with an assortment of breakfast foods and fruits, although nothing hot. They even offered homemade banana bread that was yummy. We decided to stay one more night and see some of the local sights.
Our first stop for a walk with Frisco today was Cody Park that has some resident bison, deer, and elk.  Just as we started out on our walk, a beat up old pickup pulled over and we started a long conversation with Dick Peterson. He gave us some great trips for a scenic route to Joyce and Burrall’s home near Falcon, CO and he told us some great stories about the area. He was quite the talker.
We walked around the park, heading for a display of historic train cars and depot, although that was closed for the season. It was a nice park along the Platte River. 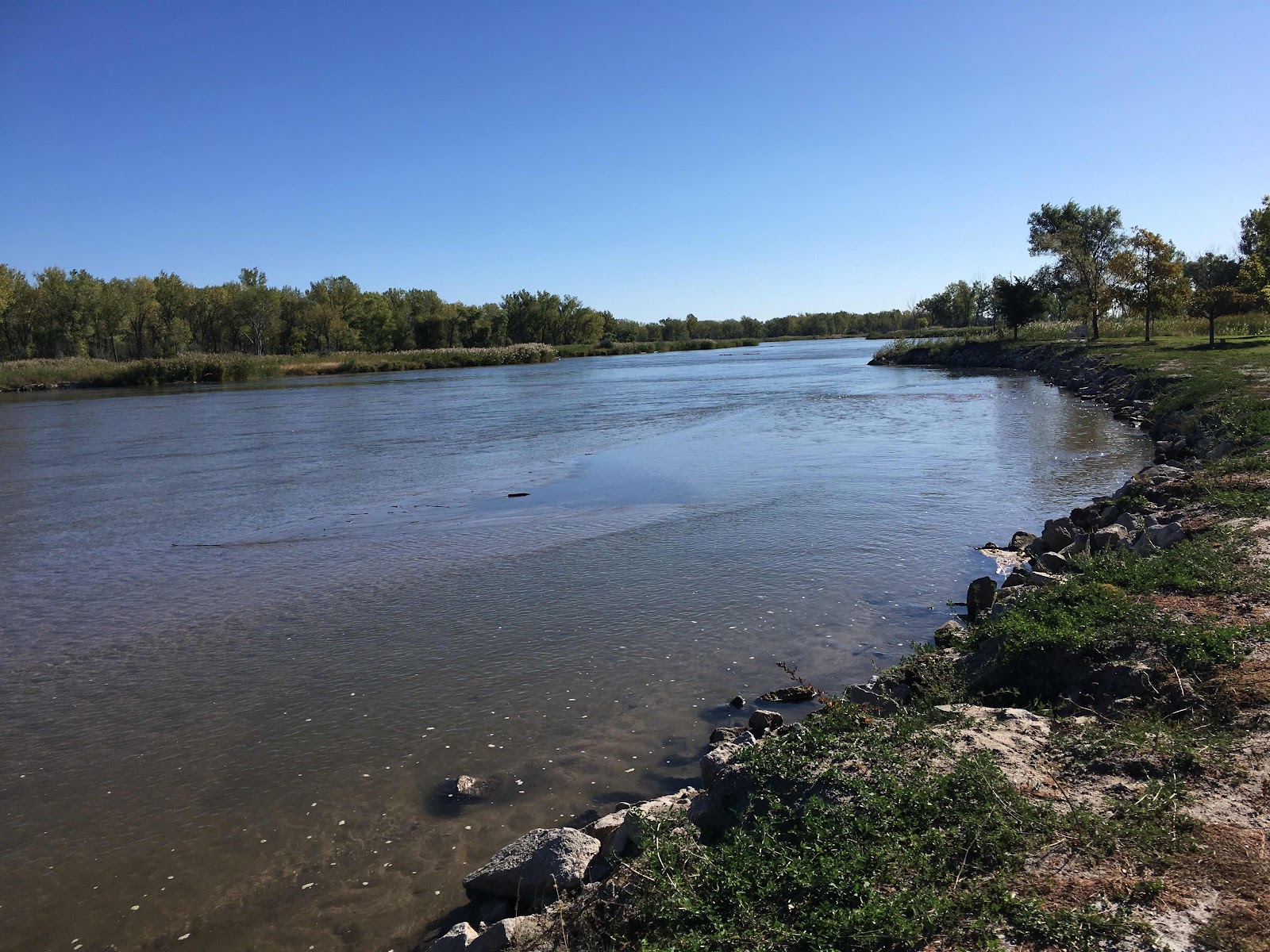 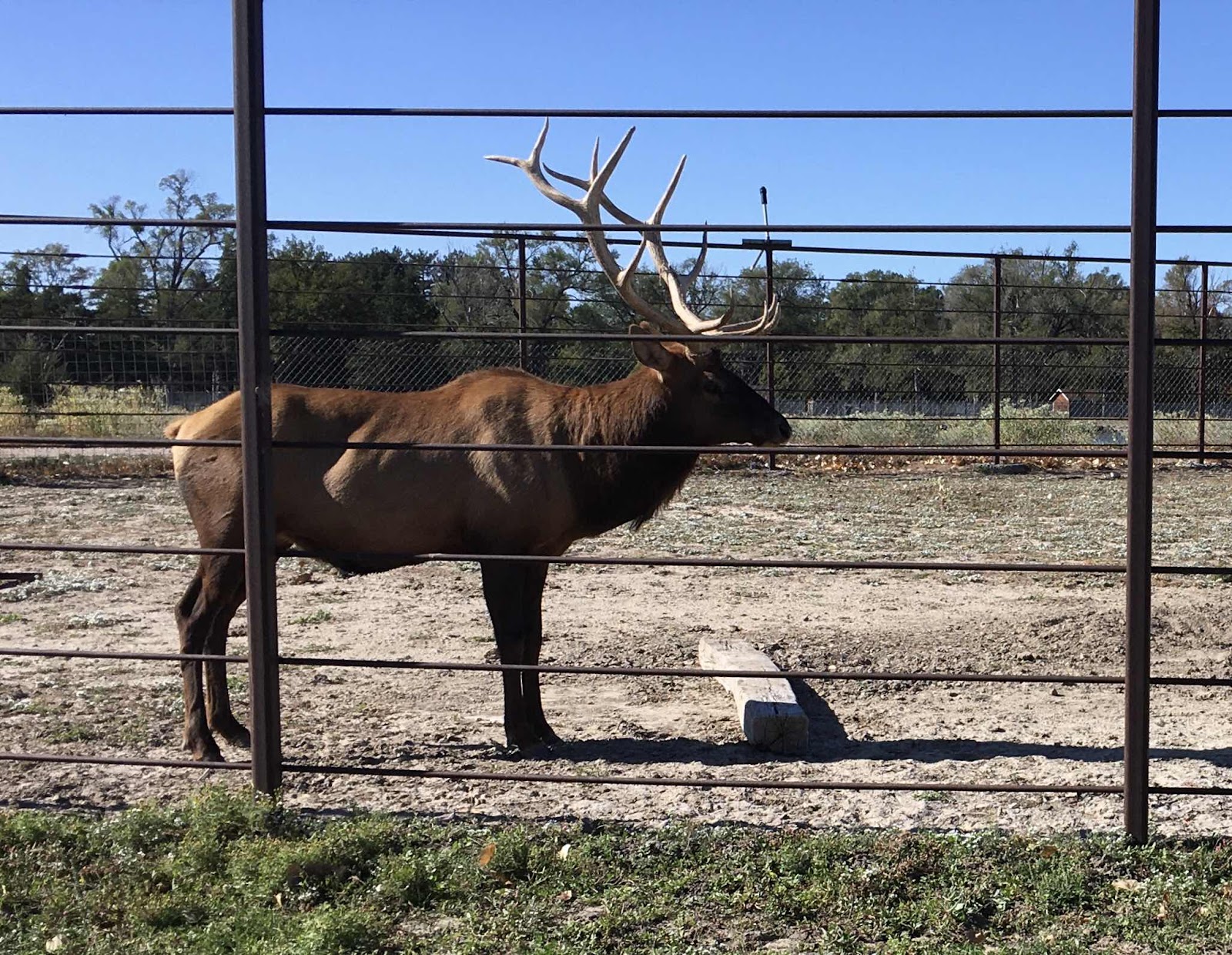 Our next stop was to learn about trains and we headed to the Golden Spike Tower that overlooks Bailey Yard, the world’s largest train yard that covers 2,850 acres, reaching a total length of eight miles. The yard is located in the midst of key east-west and north-south corridors, on the busiest freight rail line in America. Each day, Bailey Yard manages 10,000 railroad cars. Of those, 3,000 are sorted to make sure the cargo reaches its final destination.

Bailey Yard has 17 receiving and 16 departure tracks, handling 14,000 rail cars every 24 hours.  Around 3,000 cars are sorted each day in the yard’s eastward and westward classification yards, also known as “hump” yards. Using a mound cresting 34 feet for eastbound trains and 20 feet for those heading west, the hump yards allow four cars per minute to roll gently into any of 114 “bowl” tracks. Here they become part of trains headed for destinations in the East, West and Gulf Coasts of America, as well as the Canadian and Mexican borders. An average of 139 trains per day are largely comprised of raw and finished goods, such as automobiles, coal, grain, corn, sugar, chemicals, and steel along with consumer goods, including electronics, apparel and other retail products.

North Platte became a division point for the Union Pacific Railroad. Bailey Yard is where cars are sorted, railroad crews are exchanged, and maintenance or repairs is performed on equipment.

We stood at the top of the tower watching for quite a while. I was fascinated by the “hump”, watching locomotives push cars up to the top of the hump, and watching as 1 or more cars coasted down the hump onto a specific track when it would join other cars heading for the same destination. Most of what we saw were eastbound, but one train was all loaded up and headed west. It was amazing. 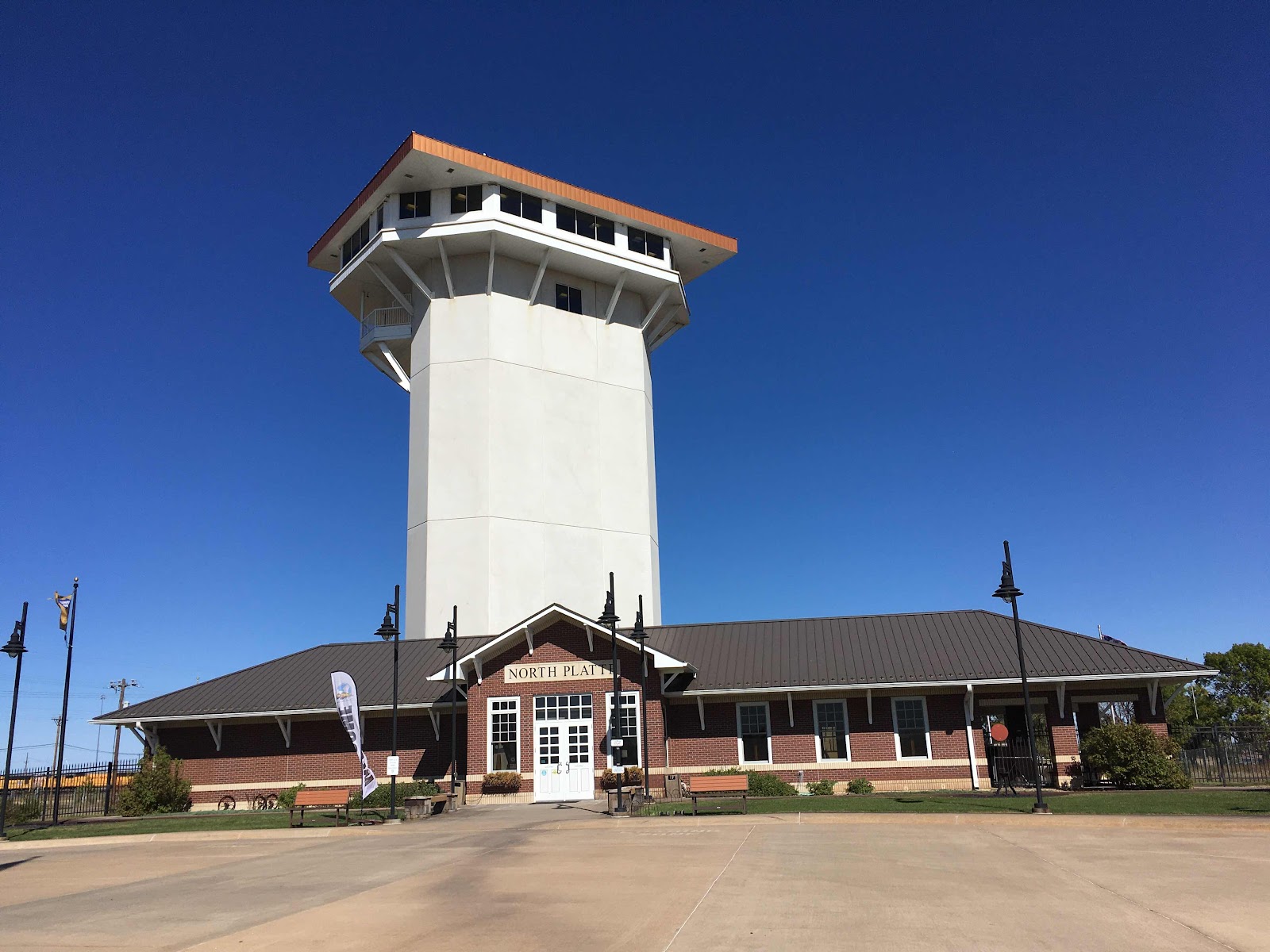 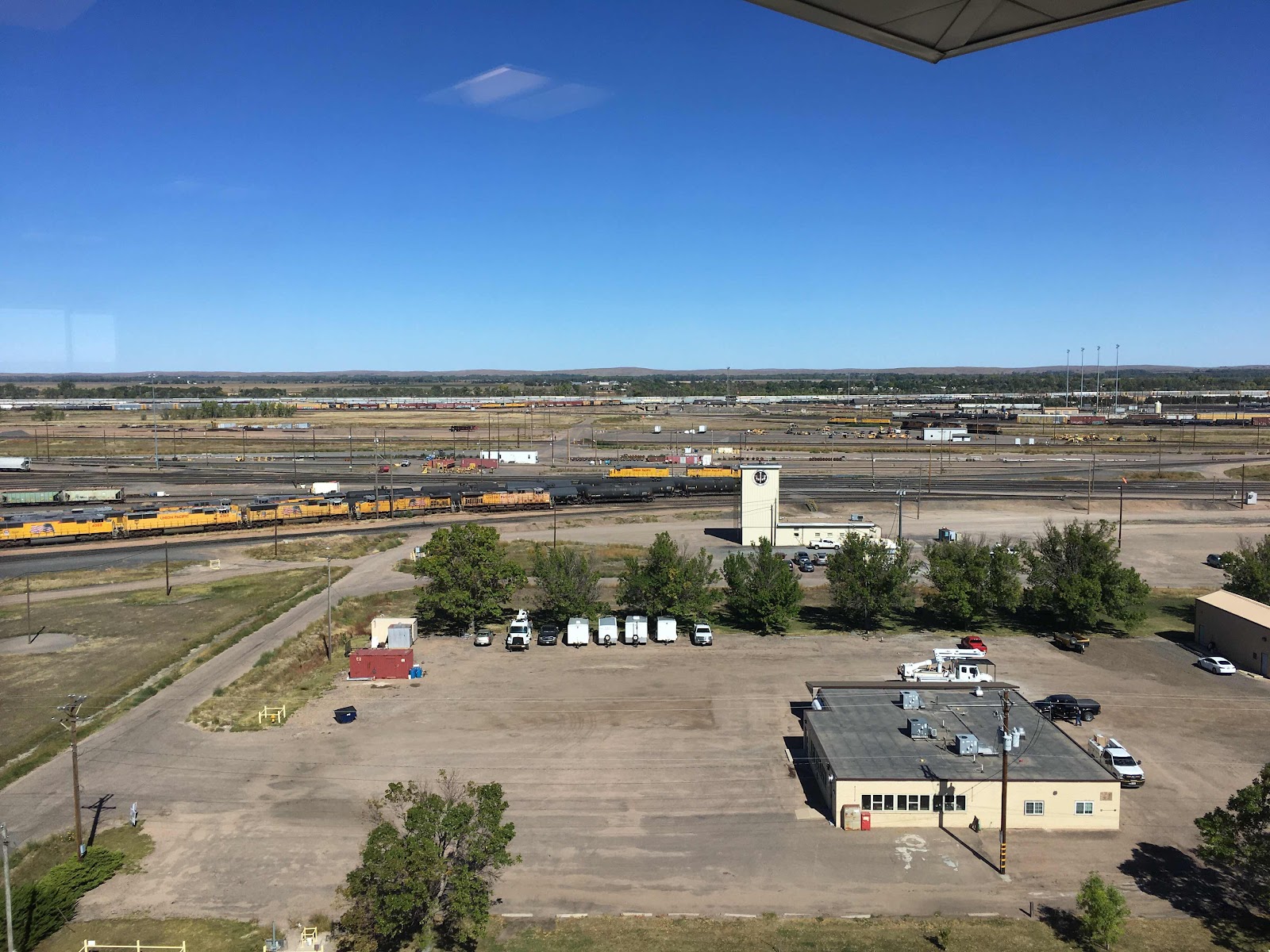 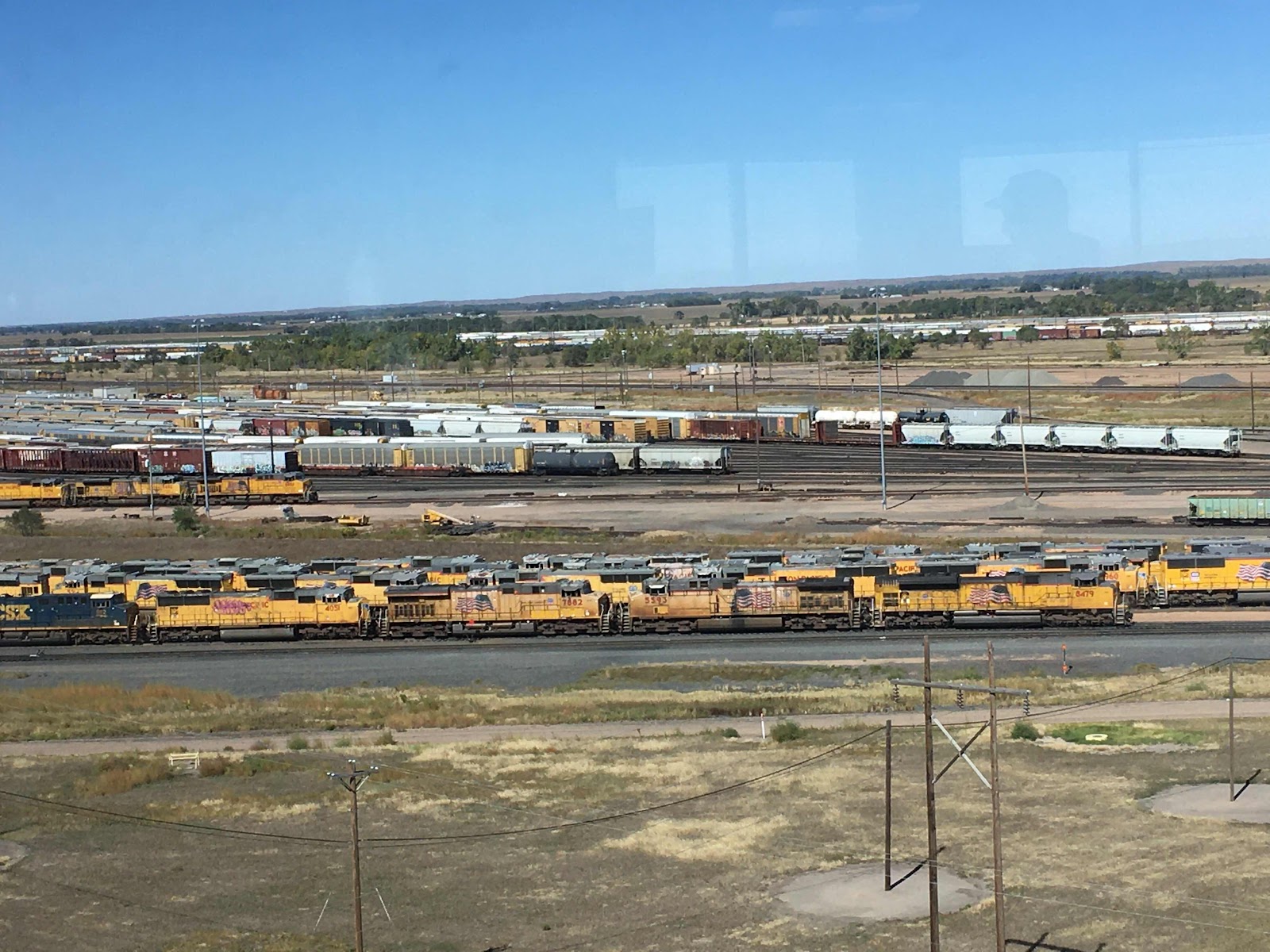 Posted by Bridge Coast to Coast Saga at 1:28 PM