Last Thursday afternoon, I picked Tom up at the airport and he will be here for the next ten days.  Since Ben’s family is going on a vacation to Cabo San Lucas, we will be house and dog sitting while they are gone.  So far, the weather has been lousy.
Leading up to Tom’s arrival, I didn’t do a whole lot other than prepare for his visit (made lasagna for the night he got here), did some shopping, laundry, and cleaning.
I also met up with Mary, the Service Coordinator in our building and got some training to help out with the bi-monthly Food Shelf - an organization that brings groceries to senior complexes.  Several people in my building no longer drive and this service really helps them out. Residents put their names on a list and a random drawing of apartment numbers is done to select the order in which people can come down and shop.  My job will be to help with setup and takedown and to greet people and watch that they take only the designated number of times.
On Friday, I helped the “Cards for a Cause” group make Mother’s Day cards. We ended up with about 6 people helping out.  Here is a sampling of what we made: 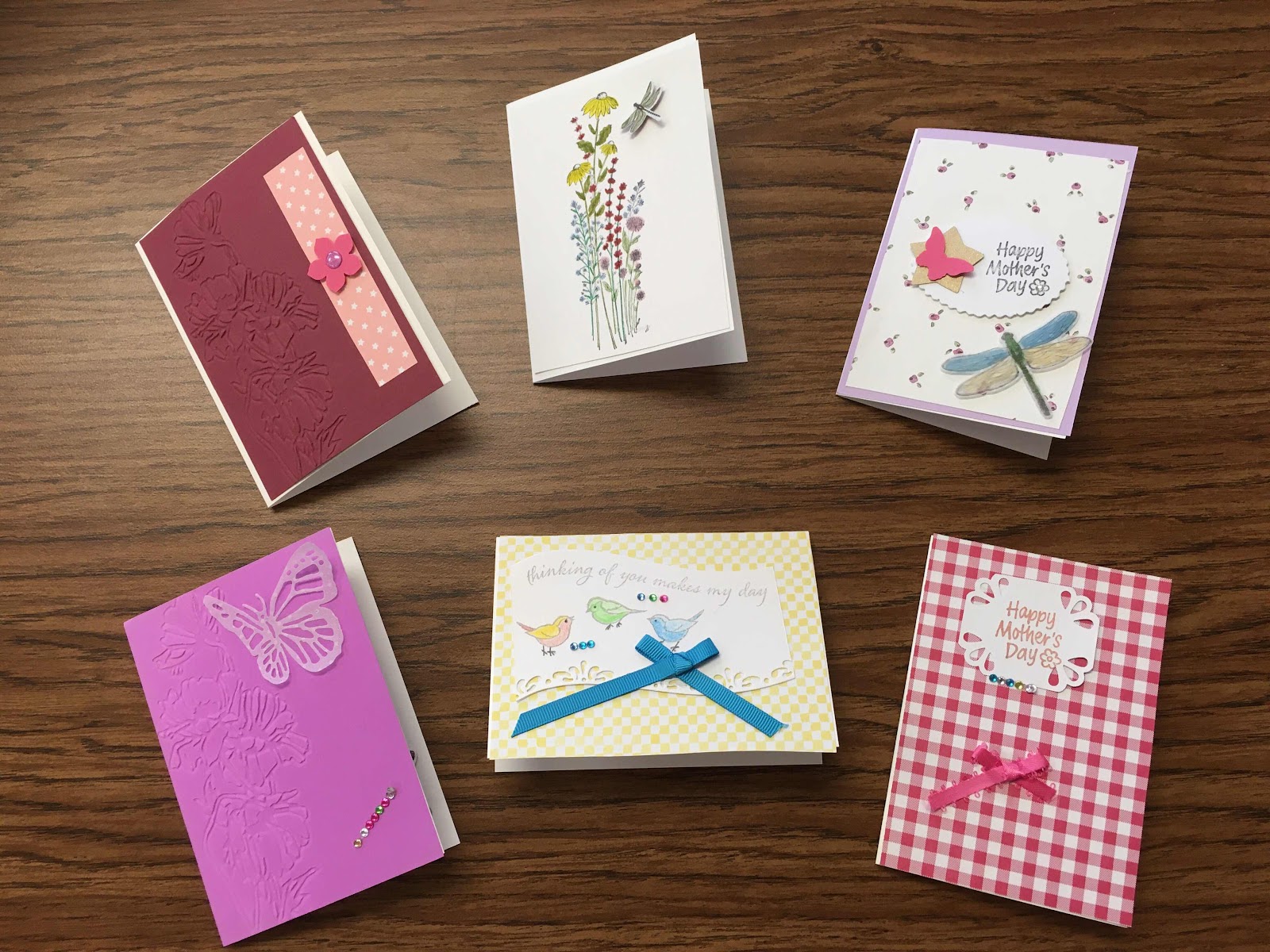 Yesterday, we went to Perkins for breakfast after stopping at two other places that were overcrowded or didn’t have much for breakfast. Then, in the afternoon, we went to the Bloomington VFW and had a beer and listened to the Blues Jam Session, there was some pretty good talent there.  Tom got to see snow today, it barely made it to 40°.
We heard some bad news from Tom’s sister Geri yesterday.  Her dog Panda (about 3 years old) attacked her cat Smokey and gave it some serious injuries about a month or so ago.  Since then, she has been keeping them separated (the dog in the back yard and the cat in the house) while trying to find someone to take the dog - until yesterday. She took the cat to the back yard to let it roam around and was closely watching them when all of a sudden, the dog attacked the cat again and was shaking it and wouldn’t let go.  She ended up with a bad bruise on her left hand while trying to pull the dog away.  The cat had some lacerations but nothing that looked too bad - and she was unable to get through to any of the area veterinarians - and then Smokey died yesterday morning. He apparently had internal injuries.  She now has to keep the dog for another week before animal control will take it and it will have to be put down.  Geri lives in Blythe, CA - a rather depressed town on the Arizona/California border between Phoenix and Palm Springs.
Posted by Bridge Coast to Coast Saga at 6:57 AM