Wednesday, July 2.  I've been walking with Dawn in the morning and we have been doing about 2.5 miles.  It has been cold the last few mornings, close to 50 degrees today.  I haven't used the AC in my camper since I got here, as the nights have been perfect for sleeping.
I went to Tom and Karen's this morning for a play date with the dogs and we ended up going to The Beach House, an extension of the remodeled and added on to the Edgewater Hotel on the shores of Lake Mendota.  When I left their house, I headed to Costco for brisket and pork loin as Pat and I are smoking meats tomorrow - should be fun, and we will have several meals put up for later on this summer.
Sunday, July 5.  Well, this week sure flew by quickly.  I spent Friday with Pat and Roger at their campsite in Spring Green.  We took a ride to the land in Richland Center in hopes of saying hello to my  Milwaukee friends, but there was not a soul there.  Maybe it was just too hard this year for
Leslie, whose husband Tom died back in January.  There has been a 4th of July campout there since Tom's parents bought the 80 acres back in the early 70s and we were part of the campers for about 30 years straight.  It was sad to see nobody there.
We stopped at a very nice city park and had a little snack and a walkabout with the dogs before going back to the campsite and played a few hands of Dirty Clubs where we each were lucky and won a game.  By then, it was time to go meet Susie and Gary at Arthur's Restaurant for fish fry.  It was nice to see them again and we had some good conversation over Old Fashioneds and dinner.
I made it back to Stoughton before the sun set and it was gorgeous as seen through my rear view mirror.  The sky was a gorgeous, hazy pink because of the ash from fires way up in Alberta, Canada.
4th of July was celebrated with a picnic at Al and Diane's house with Tracey's family and then Pat and I went to the Catfish River Music Fest in Stoughton and listened to Charlie Parr's performance.  I really enjoyed his music and will have to find some of it on Pandora or Spotify so I can hear more in the future.
Stoughton's fireworks display was done on Sunday (the last day of the 4-H Fair) and I watched them while lying on my bed in the trailer, head propped on pillows and looking out the window - it can't get any better than that.  There were lots of private fireworks going off on the 4th but I spent that nite consoling Frisco - the little screechy ones bother him more than the biggies. 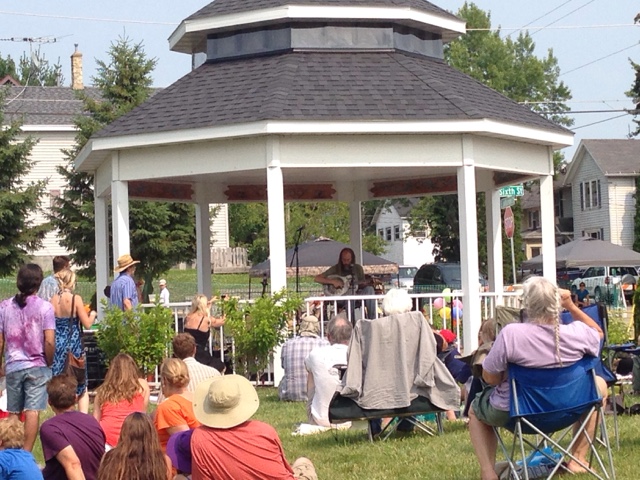 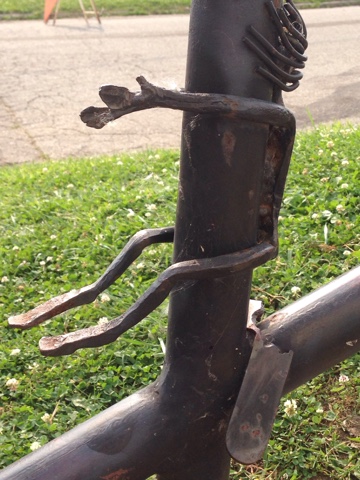 We found this interesting sculpture on a railing on a stairway as we headed back to our car. 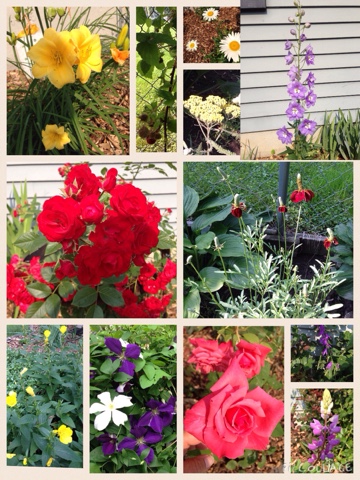 I just had to do a collage of Pat's Perennial.  Everything is so pretty right now.
Posted by Bridge Coast to Coast Saga at 5:54 AM