Monday, July 27.  After all of that physical activity yesterday, none of us had much energy today.  Jill and I did some housecleaning, I made a grocery run, and other than that we entertained kids around the house and made easy meals.  Oh, Jill gave me a much needed haircut this afternoon and she is working on Ben's right now.
Bedtime with Charlotte was a nightmare tonight - I was going to do stories so Jill could get Ben's haircut done early.  She started to cry and throw a tantrum that lasted for at least 30 minutes and lost all of her story privileges because of it.  She really does love me, I don't take it personal - I know she is a mixed up 3 year old.
Tuesday, July 28.  Well tonight is my last night at Ben and Jill's for a couple of weeks, so I have started to get my things together and get the camper ready to roll again.  That is, while the babies were napping.  Today was Jill's work for the salon day so I babysit this morning.  The weath was predicted to be stormy all day so I didn't take them to the playground this morning and it turned out to be nice and we had no rain.  I also hurried to take the dogs for a short walk when there was a break in the rain and it never rained again all day.  Reminds me of what I really like about Arizona weather - the forecasts are usually right-on.
For the first time ever, I started my refrigerator cool down on propane.  After checking several times over the last several hours, it seems to be working correctly.
Tomorrow I will hang out with the little ones in the morning, go to Charlotte's concert at her school at 11:30 and then head on down the road to spend a couple of alone nights at Hidden Bluffs Resort.
Wednesday, July 29.  So I stayed with Norah and Camille at the playground yesterday morning while Jill went to the library for new books for them.  Then we met Ben at home and we're off to Charlotte's recital.  Camille was on my lap and managed to sit still for the first 3 violin performances and then she got fidgety and I had to take her outdoors, so I missed Charlotte's part.  Jill told me later that I didn't miss much since she held her prop in front of her face the entire time and faced the back of the room for the finale.  Oh well.
I got on the road by 1:00 and made it to my destination near Spring Grove, MN by 4:30 with a couple of stops along the way for gas, produce, and a few groceries.  This place is gorgeous, a valley that is bordered by the Root River on one side and gorgeous rock cliffs on the other.  I chose a pull-through site, then wished I had backed in to one with the cliff.  Next time - I will come back here because it is so nice, although kind of hard to find and really remote.  They have good wifi though.
Dinner was sweet corn and cucumber and tomato salad - accompanied with a vodka tonic.  Oh, and 2 peanut butter cookies that Jill handed me as I was leaving the house.  Yummy!
Thursday, July 30.  What a relaxing day this has been.  My neighbors all left this morning and it has been quiet with the exception of the happy voices of children playing at the pool and the chirping of birds.  Speaking of birds - the blackbirds were congregating in masses in the tree across the way last night.  Is it a sign of fall?
I did manage to catch up on some business - pay a couple of bills, put away paperwork that has accumulated, and I did some housekeeping.  Here is the rock wall that I mentioned - I will choose one of these sites on my next visit. 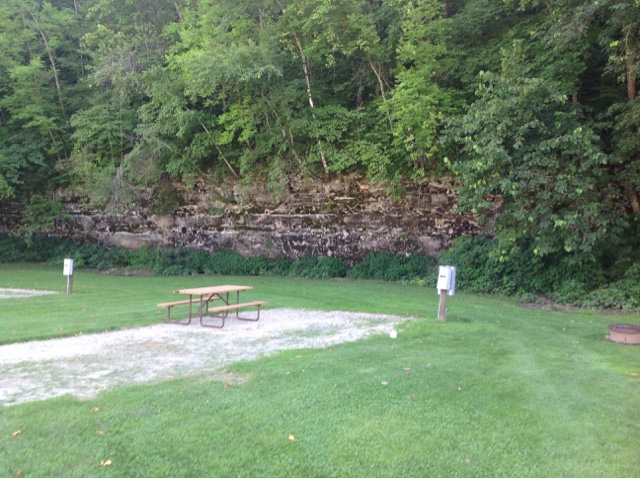 Friday, July 31.  As I drove through southeast Minnesota, northeast Iowa, and wester Wisconsin today, I marveled at the beauty of the area.  Most of the drive was on scenic roadways of the drift less area, formed years ago by the glaciers that cut a path creating valleys that are surrounded by hills and rivers, first the Iowa, then Mississippi, then the Wisconsin.  Stately old Victorian farm houses dotted the way and there were very few towns.  Fields that were sectioned off into corn, soybeans, wheat, and occasionally tobacco made the variations in green so colorful - frame that in blue sky and it provided me with gorgeous views the entire trip back.  Had I taken the highways, it would have been 3 hours but my way took at least 5.
I arrived at Pats and got parked in the driveway - that is after many, many attempts.  We had a nice evening with fish fry at the VFW.
Posted by Bridge Coast to Coast Saga at 6:09 PM