Yesterday morning, we dropped Frisco off at Bark Avenue for a break from his people and headed north to Eager where we have a private room and bath rented through AirBnB.  It was a cold and windy day and we pulled over a few times to enjoy the scenery, but scurried back to the car quickly. It had been several years since I drove through the Salt River Canyon and it is just as pretty as I remembered. This time, there was a lot of water and it was flowing quickly.  There was a lot of snow on the ground at the higher elevations.  A short drive off the beaten path took us through Greer, a quaint little mountain town with the hillsides dotted with log cabins. 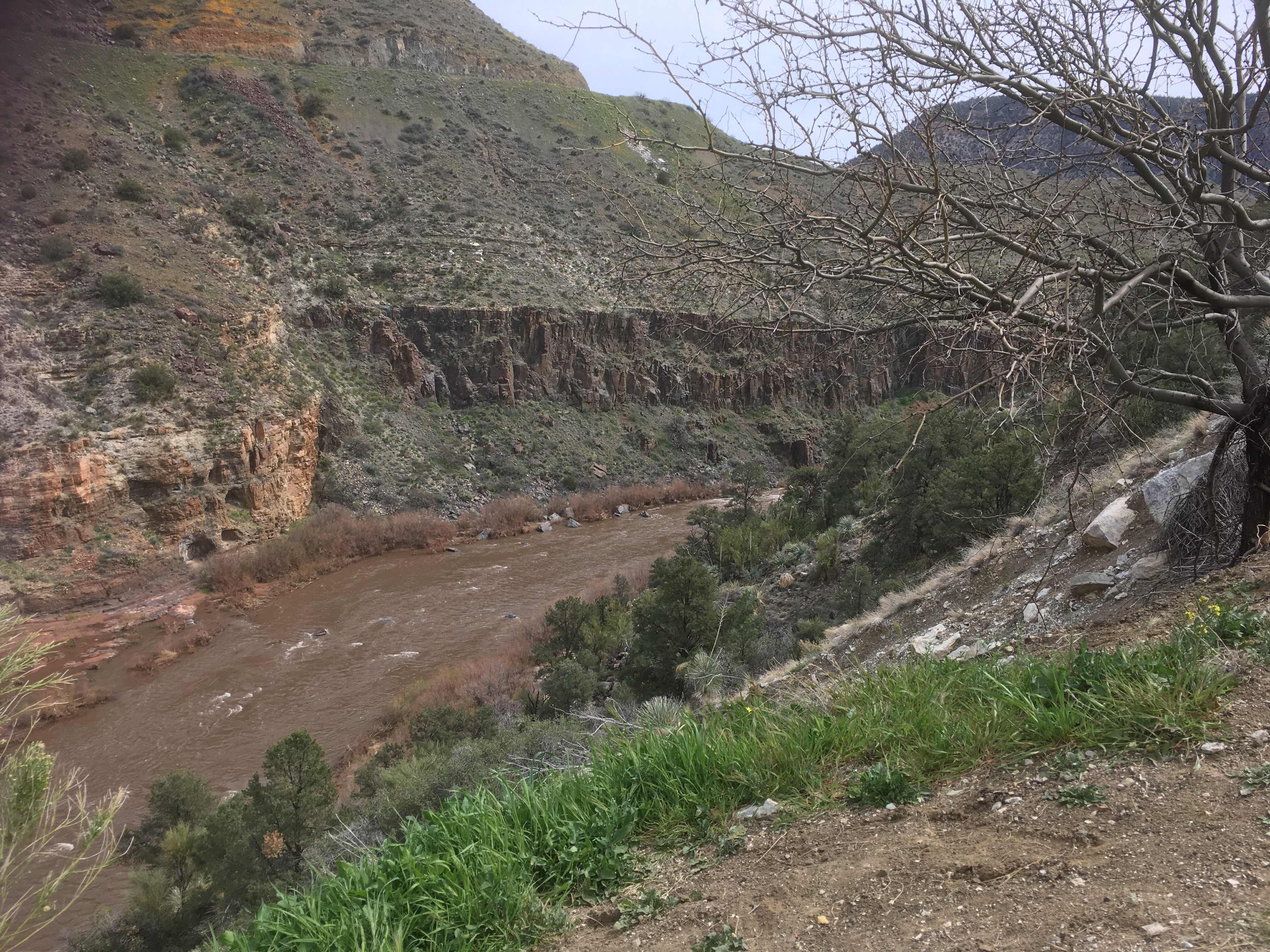 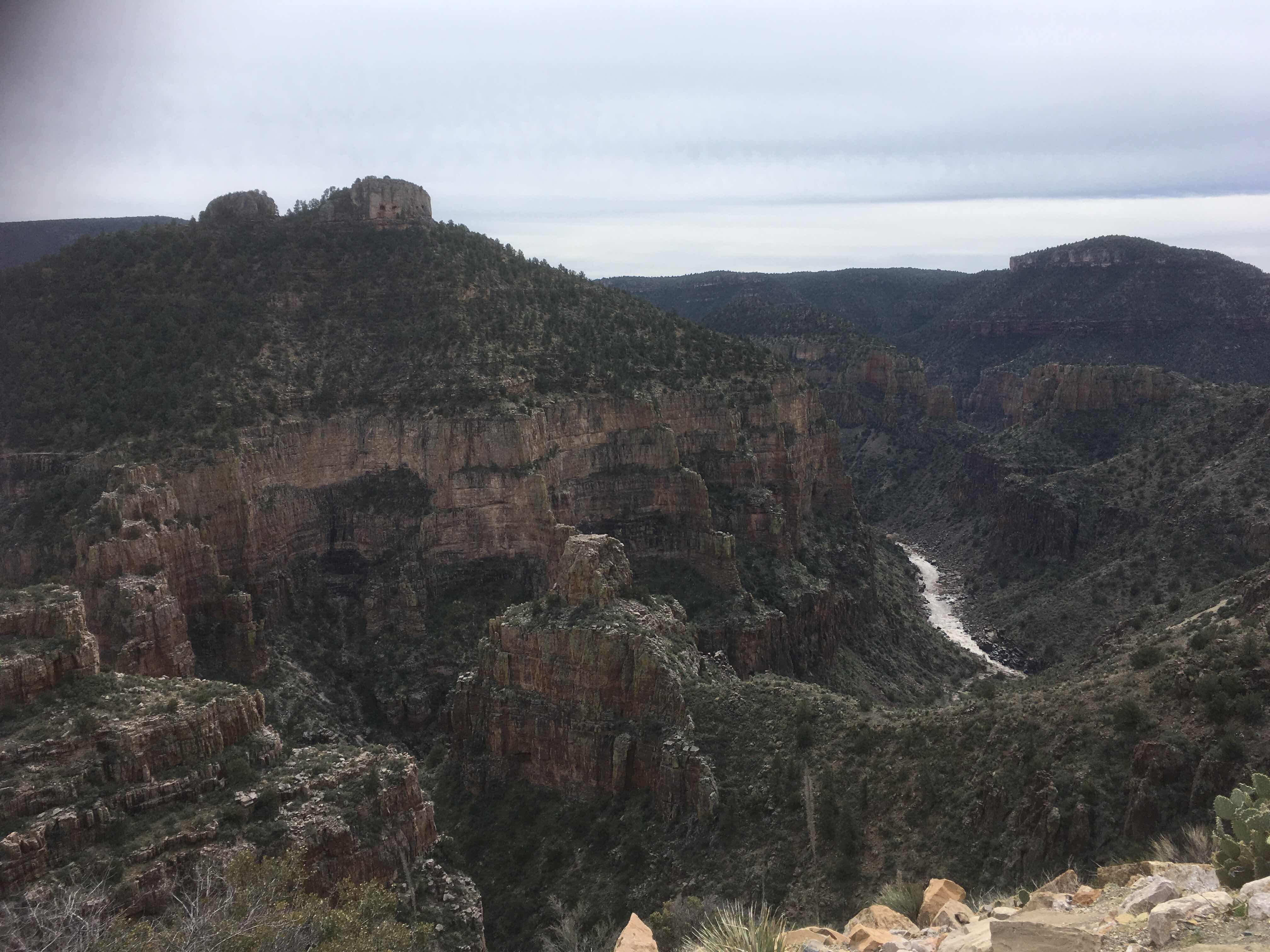 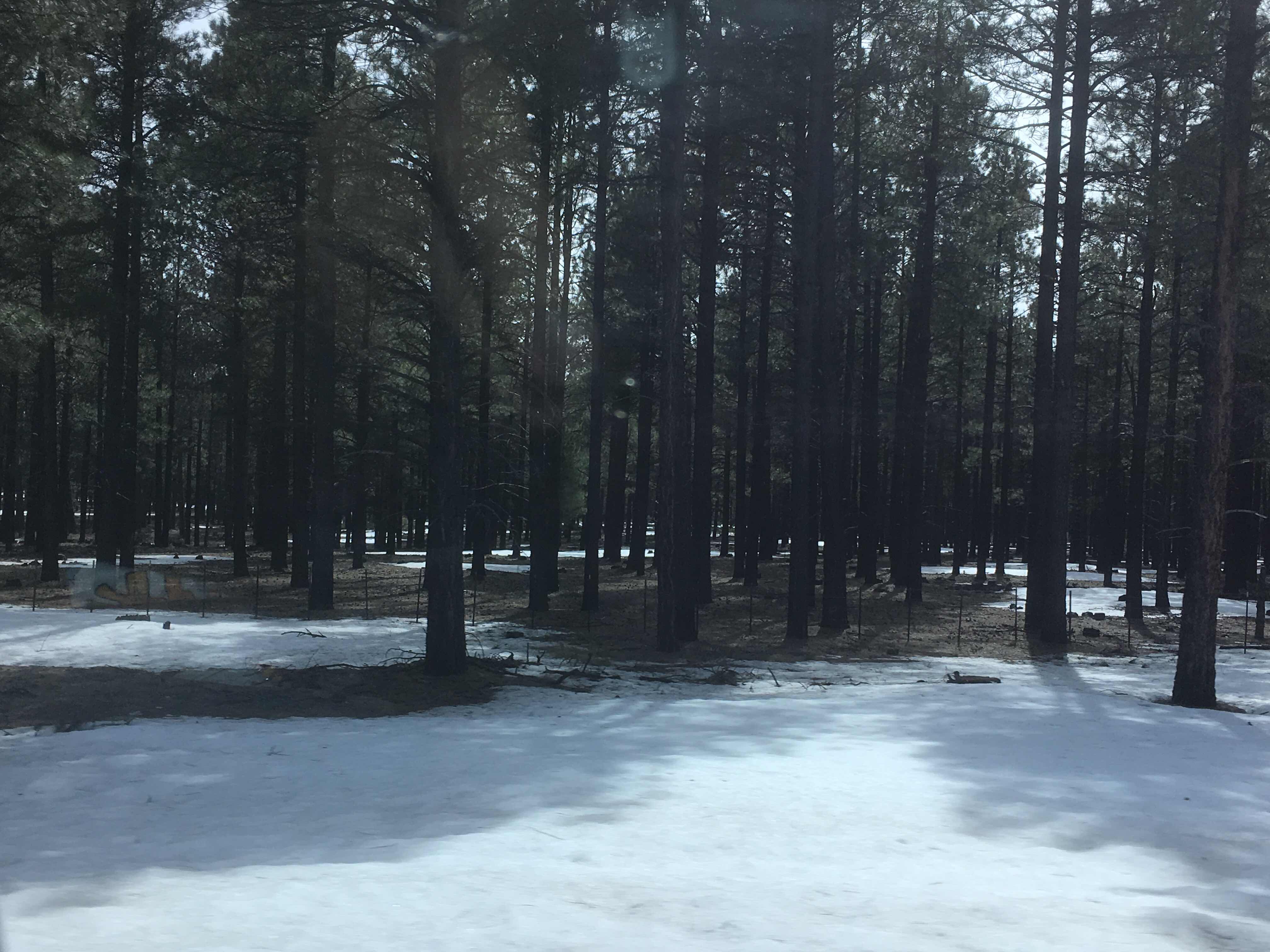 For some reason, my texts to the owner of the unit were not going through and she didn’t get my message as to when we would arrive, so it was still locked when we got there. We drove around Eagar and Springerville to get the lay of the land, then checked in.  The place is decent - a large room with king size bed, 2 recliners, a tv, bath with a whirlpool tub, and a kitchenette and is in the back of the house with a private entrance - all for $59/night plus a few fees.
We had dinner at the Trailriders Cafe and the burgers and fries were delicious and my Bloody Mary was yummy too.
I filled the whirlpool tub and took a nice, long, hot bath and then filled the tub for Tom but realized there wasn’t enough hot water for his bath. He waited patiently until almost 11:00 before there was enough to fill up the tub.
I managed to spill my coffee on the light carpeting this morning and scrambled to get the large, ugly blotch cleaned up. In the process, I dirtied 2 bright, white, bath towels, so then they had to be cleaned too - I certainly didn’t feel right leaving a mess for the owner.
After breakfast at Aliberto’s, we went to the well known Western Drug, the historical drug store in Springerville that also has clothing, sporting goods, ammunition, liquor, groceries, souvenirs, office supplies, shoes, and who knows what else. A well known and very fun place to browse.
Our next stop was the Visitor Center, we like to stop there because they usually are full of local information and many times, a museum. This one is housed in an old school house (none of the original building remains) and it has rooms with artifacts and art.  We learned about Casa Malpais, ancient ruins near here but we did not visit the ruins as it was cold and windy with gusts up to 50 mph - tours were not operating.  We did talk with the tour guidefor quite a while and he provided a lot of information to us.  It is an archaeological site that features an astronomical calendar, a great kiva, ancient stairways and rock art from the Mogollon culture.  The museum contains many artifacts that were found at the site; pottery, baskets, tools, bones, art and lots of other items.
And then we drove south to Nutrioso and Alpine (our neighbors Mike and Rhonda have a place there) and learned that the road we were planning on taking tomorrow is closed due to a bridge being out.  Darn, that route has been on my bucket list for a long time, but on to Plan B.  We also drove down a long, dirt road to the Sipe Recreation area and found that the facilities were closed and the road that goes beyond them is also closed during the winter months.  It started to snow while we were there and continued into the night. 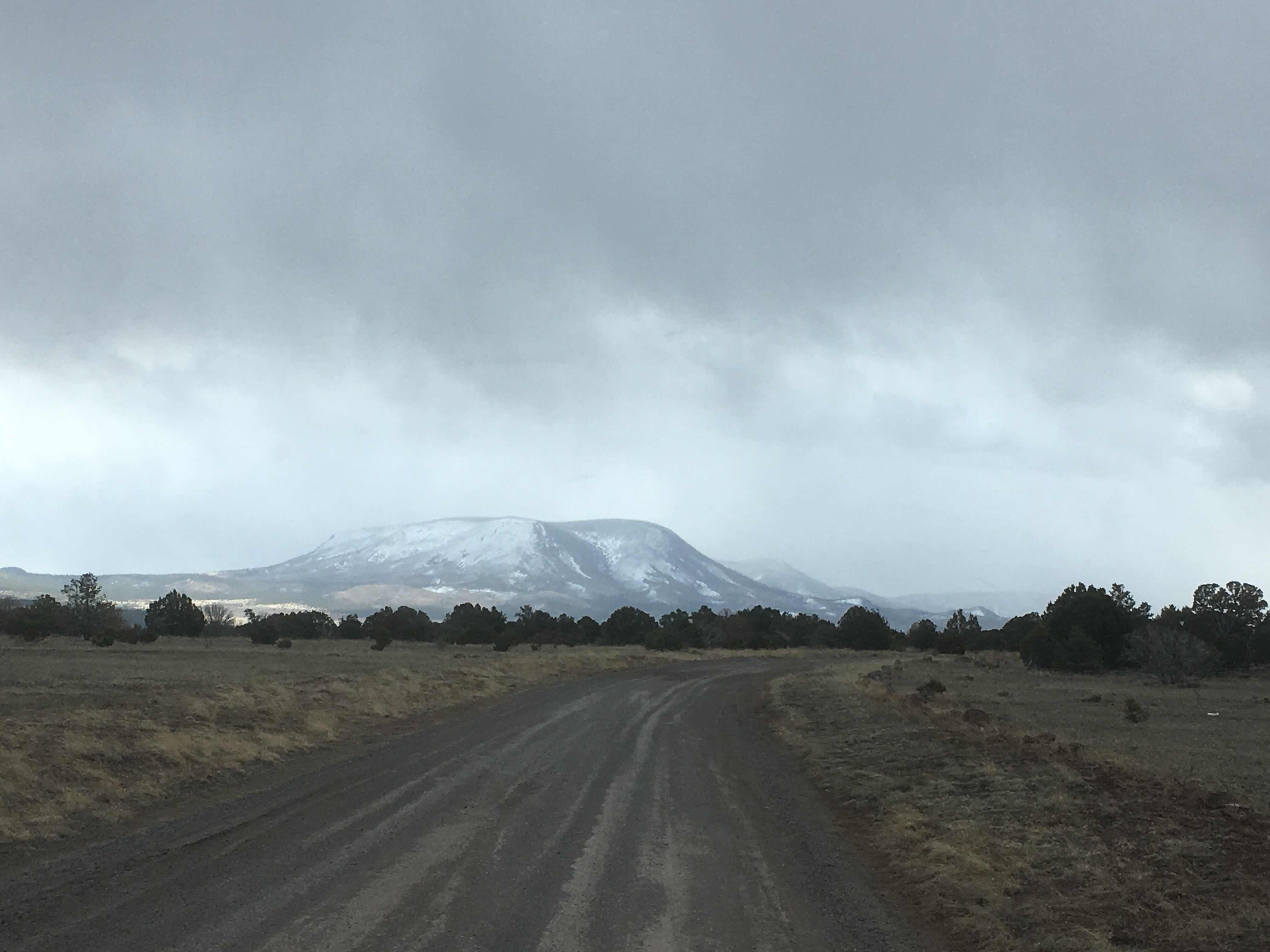 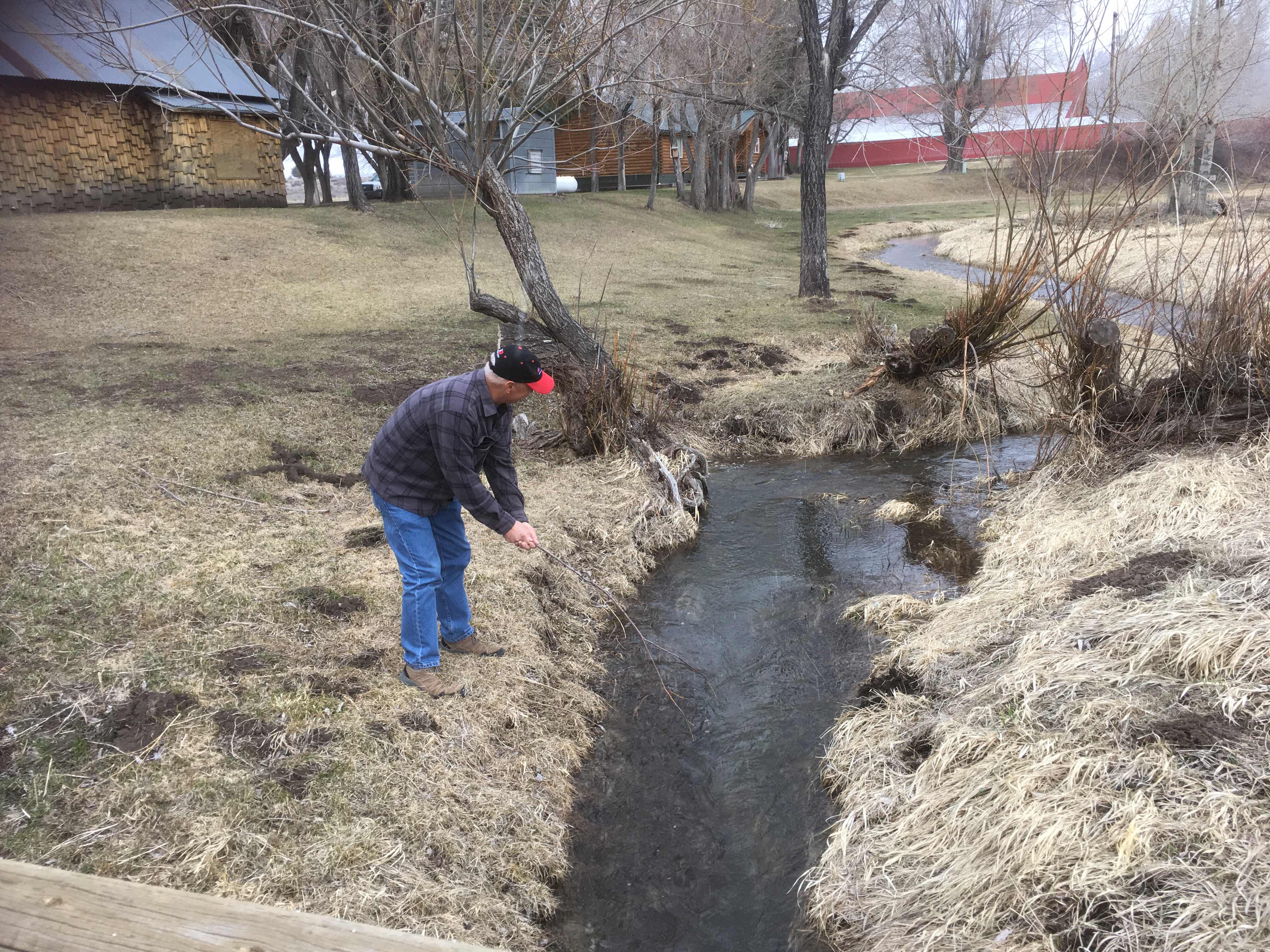 As we drove out, a break in the clouds resulted in a beautiful rainbow off in the eastern sky. 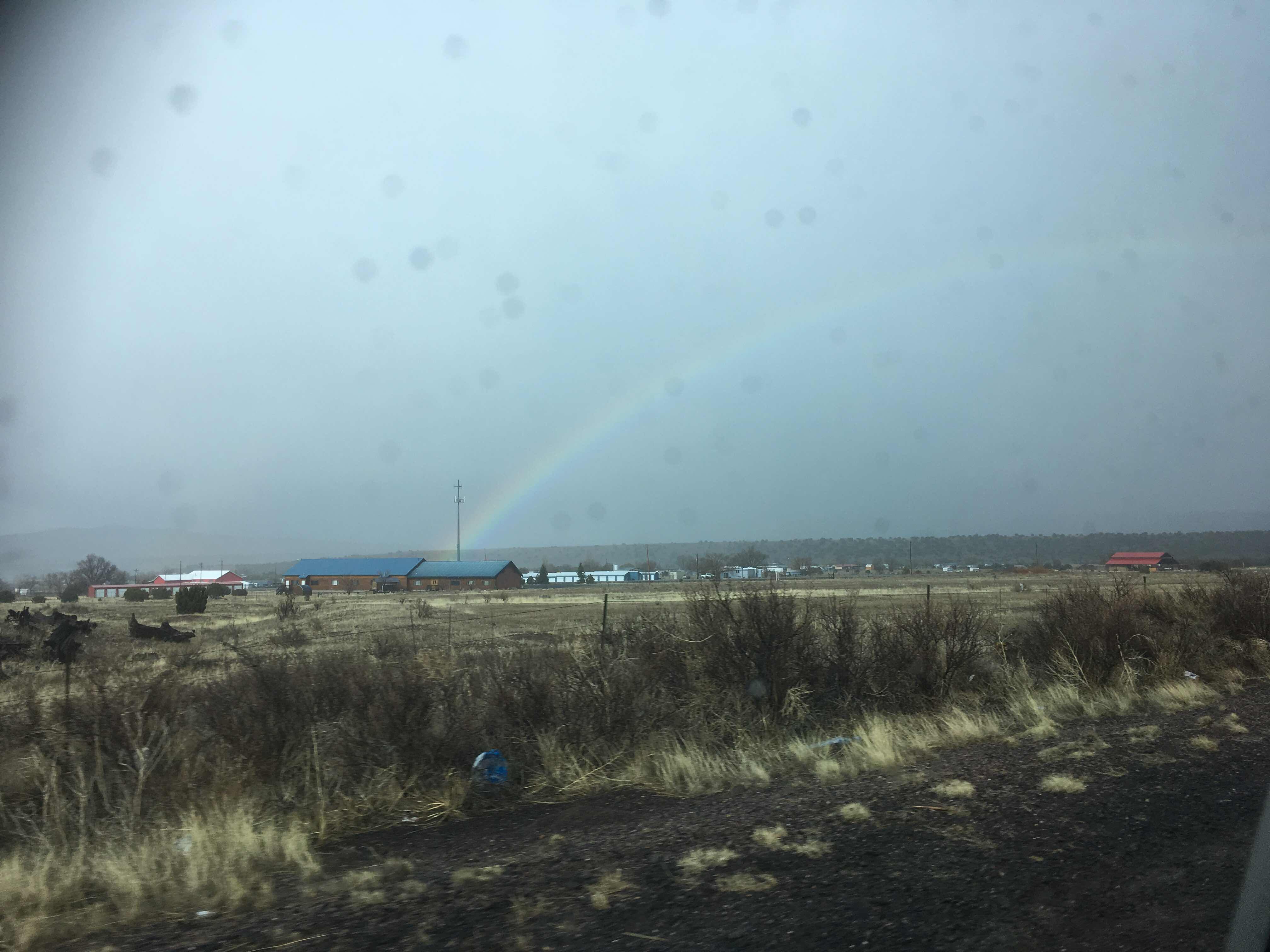 Tonight’s dinner was at Avery’s Waterhole and we had some really good BBQ.
Posted by Bridge Coast to Coast Saga at 8:59 AM