What a nice weekend we have just had. On Saturday, we had plans to go to the Lost Dutchman Days Rodeo here in AJ with Chaney, Lakin, and Nikkel. They picked us up and we headed to the fairgrounds, only to find that cars were parked along both sides of the road about a mile before even getting to the gate. Also, people were lined up at the entrance in another long, long line - out there in the hot sun along the dusty road.  We nixed the plan for the rodeo and headed to a gun store (they like to shoot at targets out in the desert) and then to The Trough for a very nice lunch.  It was lots of fun and good conversation.
Lakin, Nikkel, Tom and Chaney 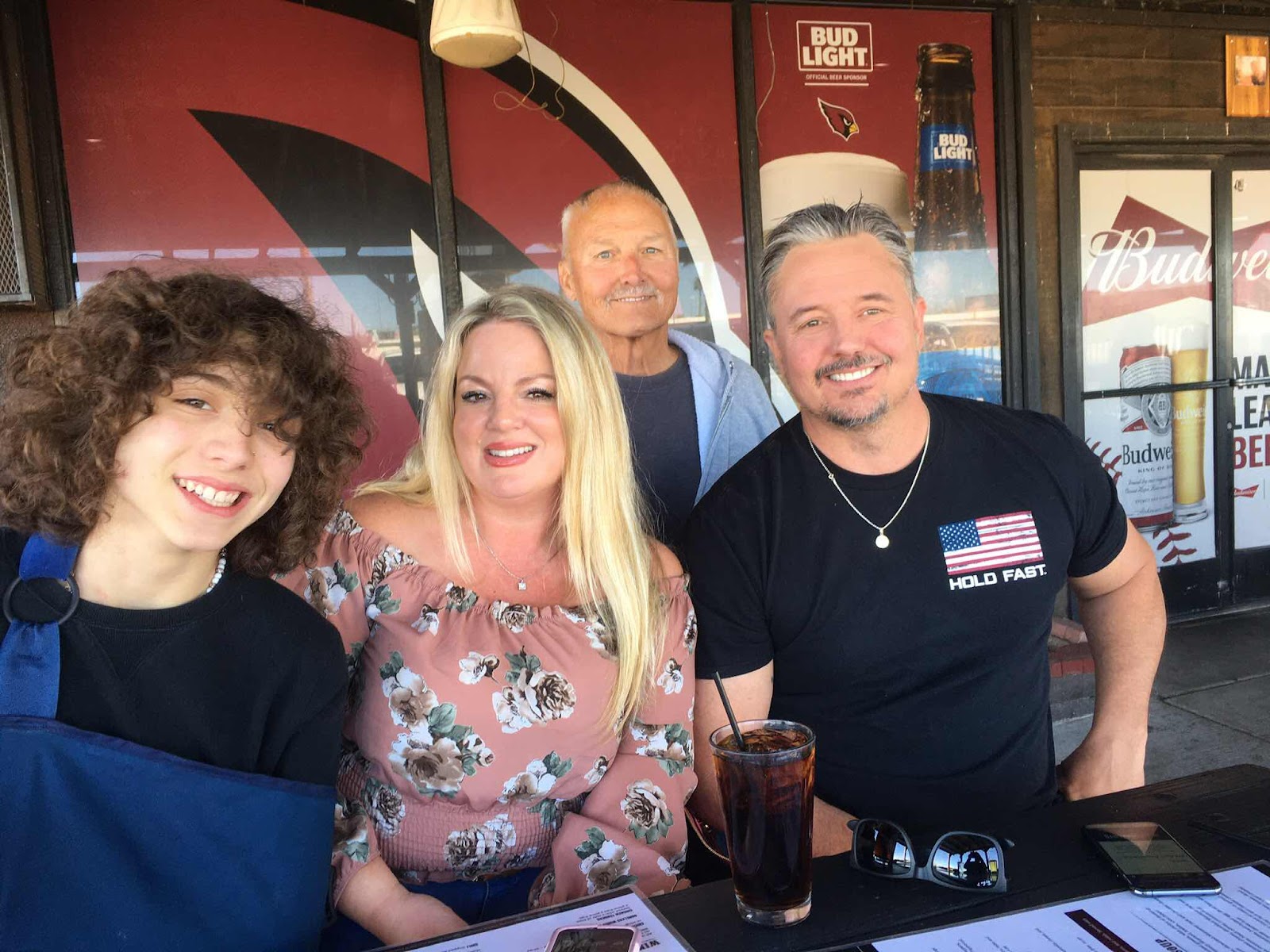 As you can see in the photo, Lakin’s left arm is in a sling because he fractured it while snowboarding up in Flagstaff.  When we saw him two weeks ago, his left wrist was in a cast from a skateboarding fall and he had just gotten the cast off before the shoulder injury. He is a sweet guy.
Happy 73rd Birthday to Tom on Sunday.  We decided to head back to the fairgrounds to see what kind of food vendors were there and to have breakfast.  We chose Mean Maggie’s food truck and had a delicious egg, ham, and cheese wrap - a very good choice. 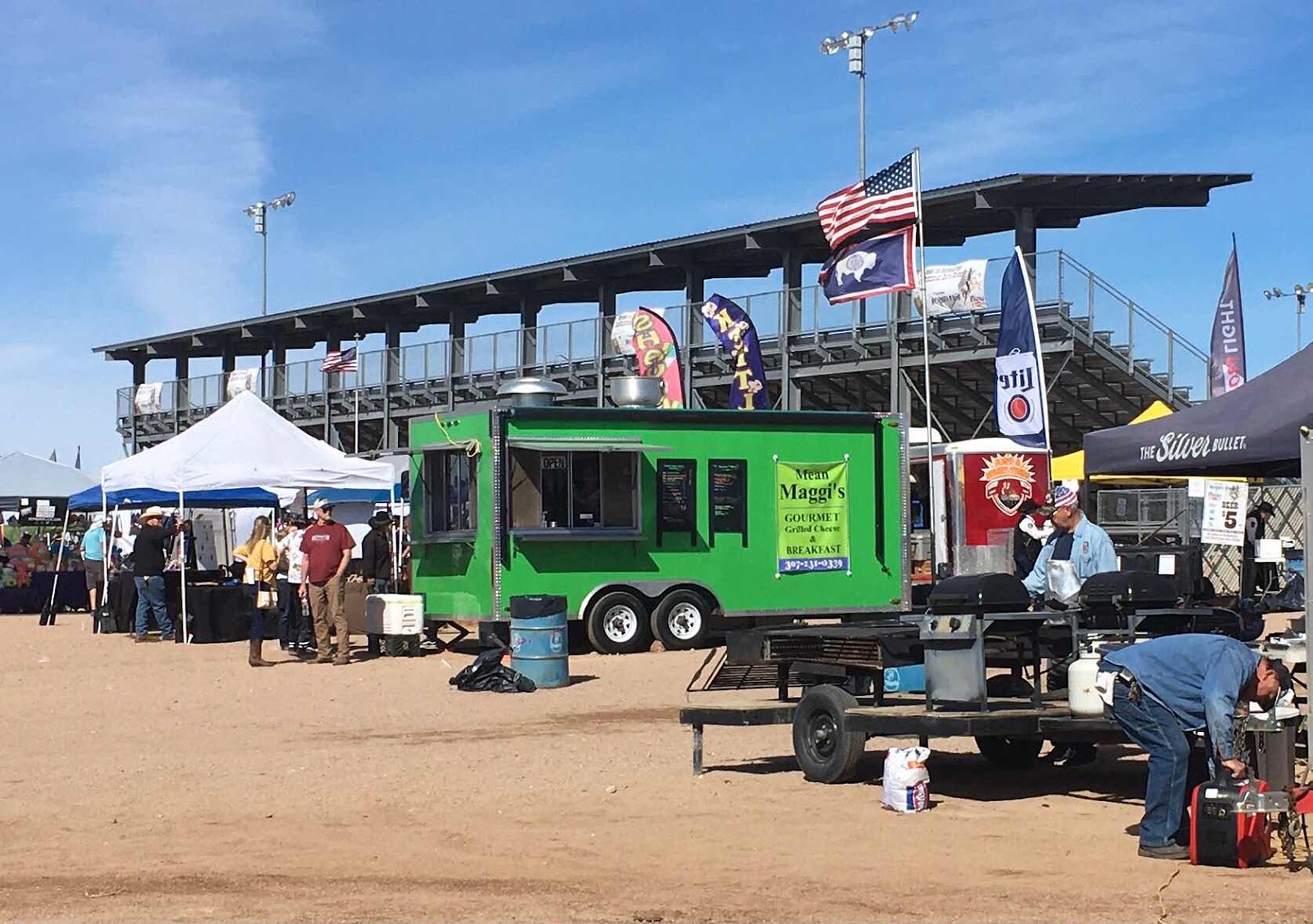 There were not a lot of people around, so we checked out the various vendors and walked around the carnival - leaving just as traffic was starting to pick up.
In chats with some of the vendors, we learned that the gates were closed at 3:00 pm and the people were packed in and shoulder to shoulder on the grounds.  We also heard that there were many angry people who came for the rodeo and weren’t allowed in. That just doesn’t sound like a fun experience.
We had a nice steak dinner to celebrate Tom’s birthday to top off the day.
Since today is my final full day here in Arizona, we decided that another desert walk was a good thing to do this morning.  We started on the Meridian Trail heading west, then went south on the County Line Trail, then took the Ruidoso Trail to the west and intersected with the Spillway Trail north until we intersected with the Meridian Trail again.  It was an enjoyable hike on a warm but breezy day - 3.5 miles in about 2 hours.
I love the looks of the Cholla forest, but wouldn’t risk a walk through it. 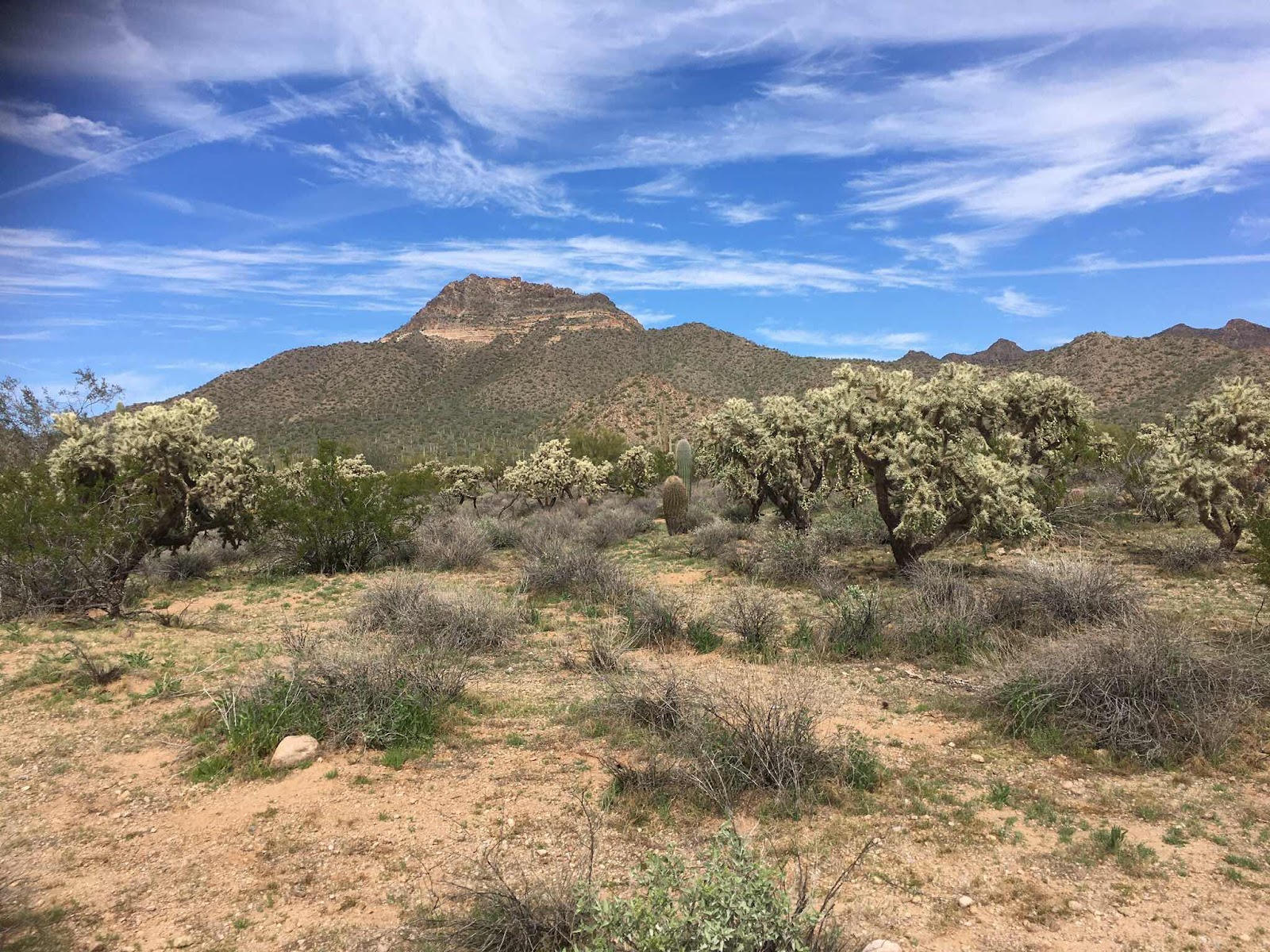 I thought this was a nice view of the trail and the Superstition Mountains off to the east. 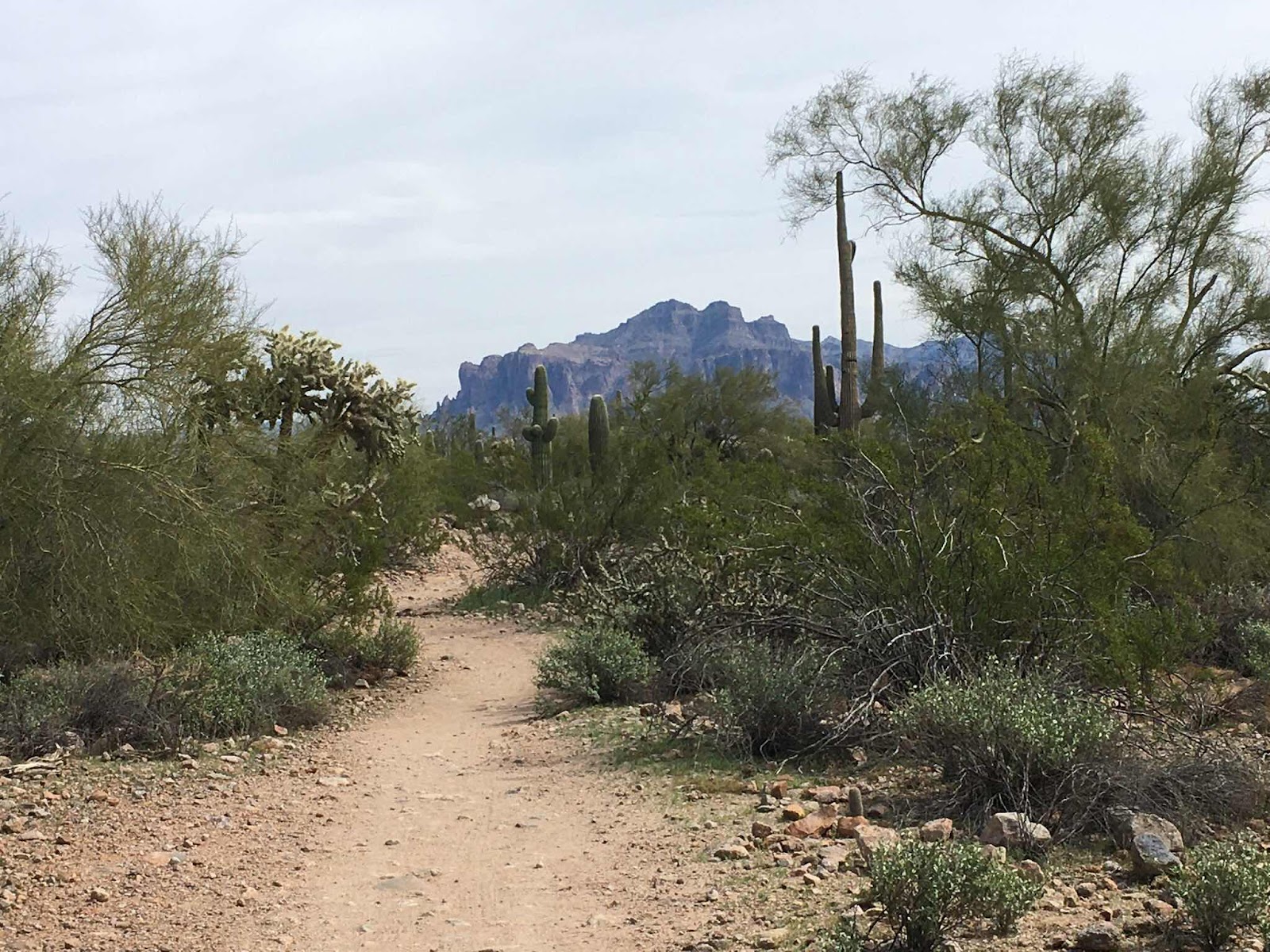 The Desert Poppies are starting to bloom. 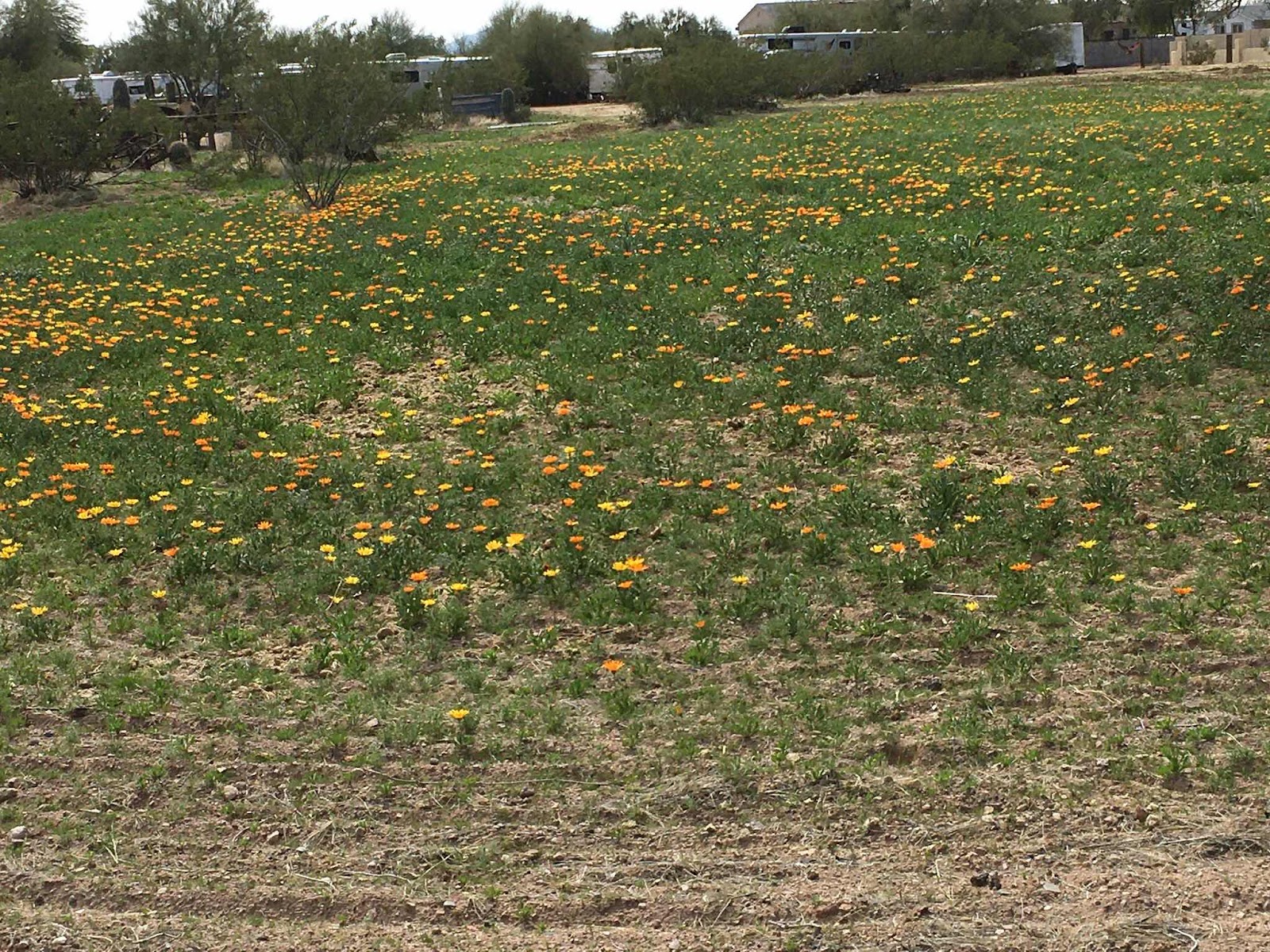 Posted by Bridge Coast to Coast Saga at 8:30 AM