Today is moving day again and I am headed to my sister Rita's house.  Before I went there, though, I spent a few hours with her daughter, Stella.  Stella, Josh, and Barley live right in the city but their home is on nearly an acre of land that is quite wooded, so it seems like you are in the country.  When you see chickens roaming around, it really feels like the country.  As soon as I took Frisco off the leash, he chased the chickens and caused a huge ruckus, so he had to be kept tied up.  I was really hoping that he would have a chance to run around with Stella's 2 dogs and Barley. 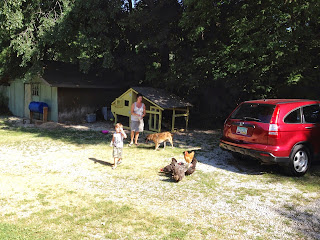 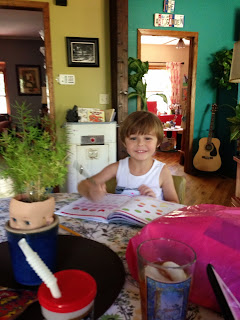 We had a really nice time together and she fixed a nice lunch.  We watched Mike's memorial slideshow and looked at other pictures, some of hers and some of mine, and played cars and Jenga with Barley.

We then headed to Rita's where I had an enjoyable evening just chilling with Rita and Denny.
Posted by Bridge Coast to Coast Saga at 6:16 AM