It’s another cold and dreary day in Cody, I even saw snow flurries when I walked Frisco this morning. Last week, we were only able to see parts of Yellowstone National Park, so we drove there again today, this time entering from the east.  The drive along the Shoshone River and through the Shoshone Canyon was gorgeous with dark, craggy rock walls.  We had to go through two short and one long tunnel along the way. The road was dotted with herds of deer and elk.
Shortly after entering the park, we came upon a jam of folks looking off toward a hilltop and Tom spotted the grizzly bear first and then I caught a glimpse of it. There wasn’t enough time to get a photo.  There were lots of Bison along the roadside too. We headed to Fishing Bridge, along the northeast shore of Yellowstone Lake, then on to the geyser basin at West Thumb which skirted the western shore of the lake.  The views are gorgeous!
Driving back north past Fishing Bridge and on to Canyon Village, stopping along the way to see the Mud Volcano and Sulphur Cauldron, incredibly stinky spots with pools of muddy, bubbly liquid flowing out of them, steamy and warm.  One of them was a cave called the Dragon’s Mouth Spring and it sounded just like there was a snorting dragon inside. The snow was really coming down and the steam blocked the view and made it so you couldn’t get good photos.
Near Canyon Village, we had the opportunity to walk along the cliffs of the Grand Canyon of the Yellowstone and see both the Upper and Lower Falls, another incredible sight.  Walking back to the car, I saw and heard a Raven behaving in a strange way. There really is no describing it, so I took s video and I hope you can see it here.
On the way back out of the park, we pulled off at the Lake Butte Overlook and there were several people with their giant lenses taking photos of a Grouse.
On our way back from Yellowstone, I saw this strange building on top of a hillside, I scurried to grab my phone and take a photo.  Atlas Obscura tells me that it is the home of Mr. Smith who built it out of logs and wood that he collected and hauled to the site in his small pickup truck.  It started out as a normal home and then he became obsessed in adding on to it, and that resulted in a divorce from his wife.  He died in a tragic fall from one of the upper levels. 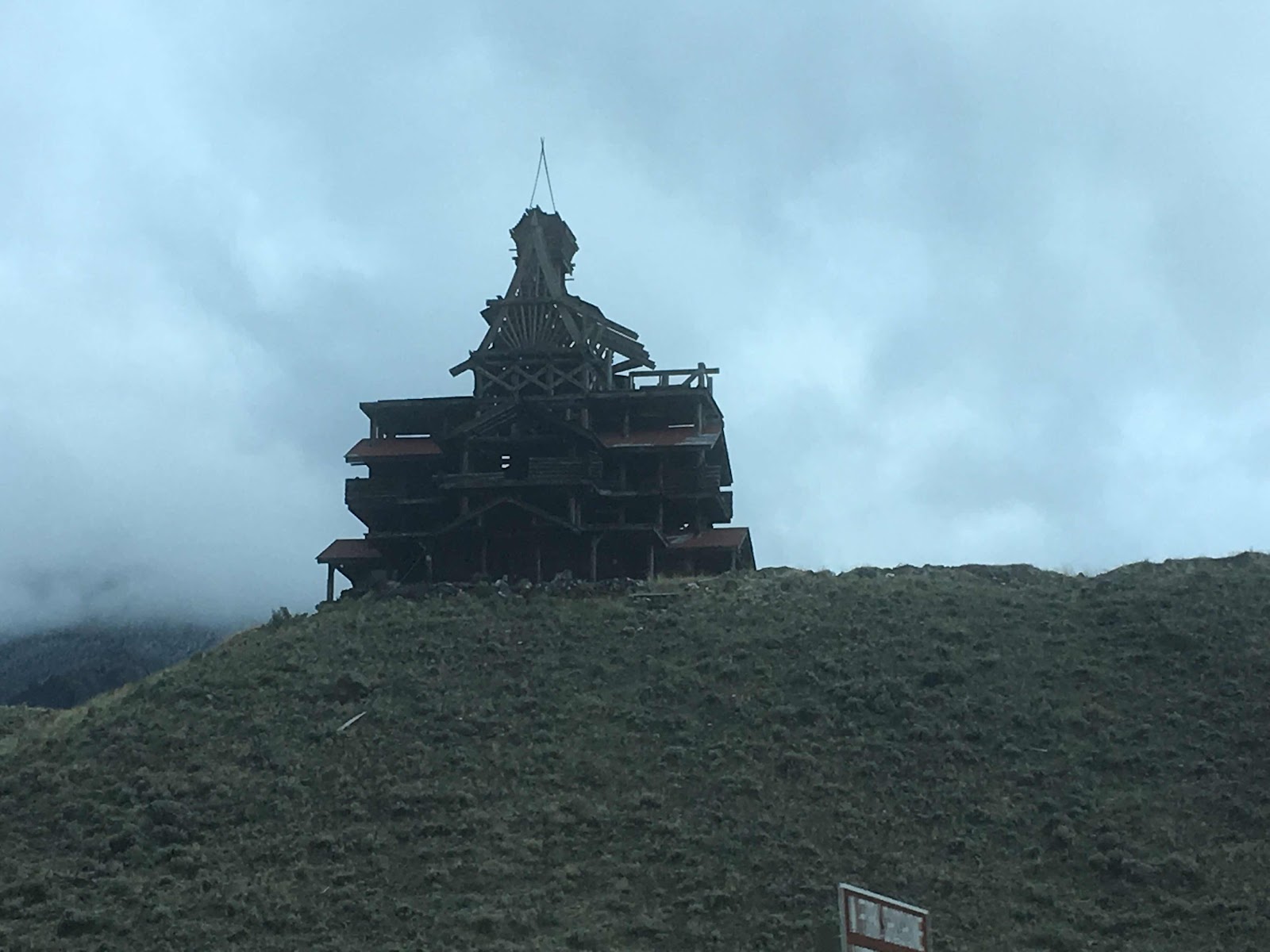 Check it out.  https://www.atlasobscura.com/places/smith-mansion
The drive was more than 200 miles and we were both tired of riding and hungry when we got back to Cody, so we stopped at the Proud Cut Saloon and had a beer and a bison burger, both were quite yummy. It was another nice day of sightseeing, although the weather could have been better. We did see blue sky and the sun shining for a little while.
Posted by Bridge Coast to Coast Saga at 7:14 PM