I was thinking this afternoon, that I haven’t written for the last few days and I had better do it soon or I will forget what is fresh (well, sort of) in my mind right now.
This part of the journey was a 240-mile jaunt from Lennox, SD to Clear Lake, IA on US-18. We passed through some lovely small towns and mostly farmland, much of it has not even been plowed or planted at what seems to be fairly late in the season.  The closer we got to Clear Lake, the more corn we saw growing in the fields, but still it seems like it is way too small and stunted.  We settled into the Oakwood RV Park on the south side of Clear Lake. I have been here several times in the past and always thought that it is such a nice, tidy place.  The tidiness lacks a bit these days, especially noticeable in the weedy flower beds, but still a very nice park at $35/day. Tom noted that this is the only RV park that he has ever been in that used an honor system for laundry - the cost is $2/wash and $2/dry and you deposit your money in a lock box. That impresses me. 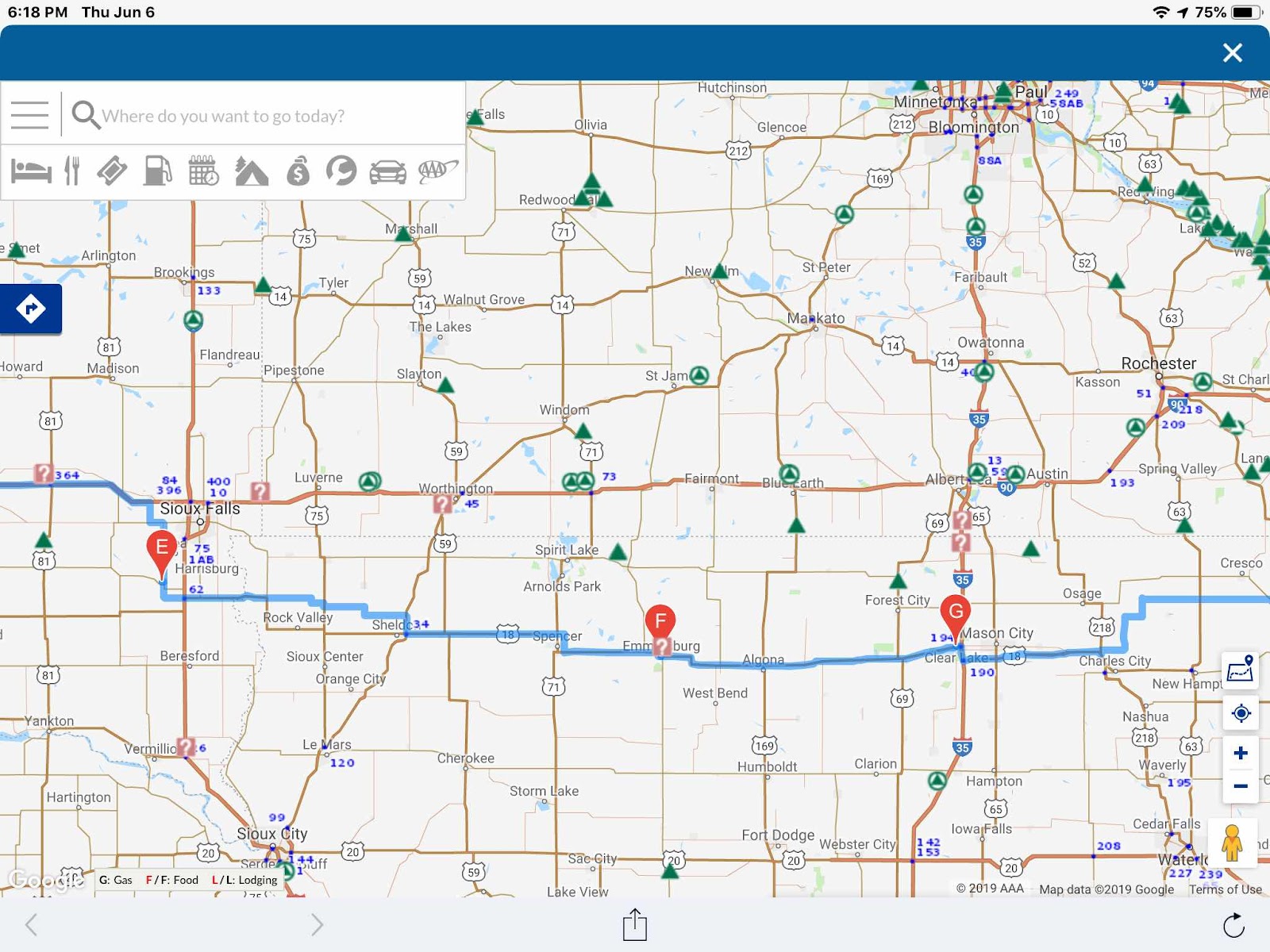 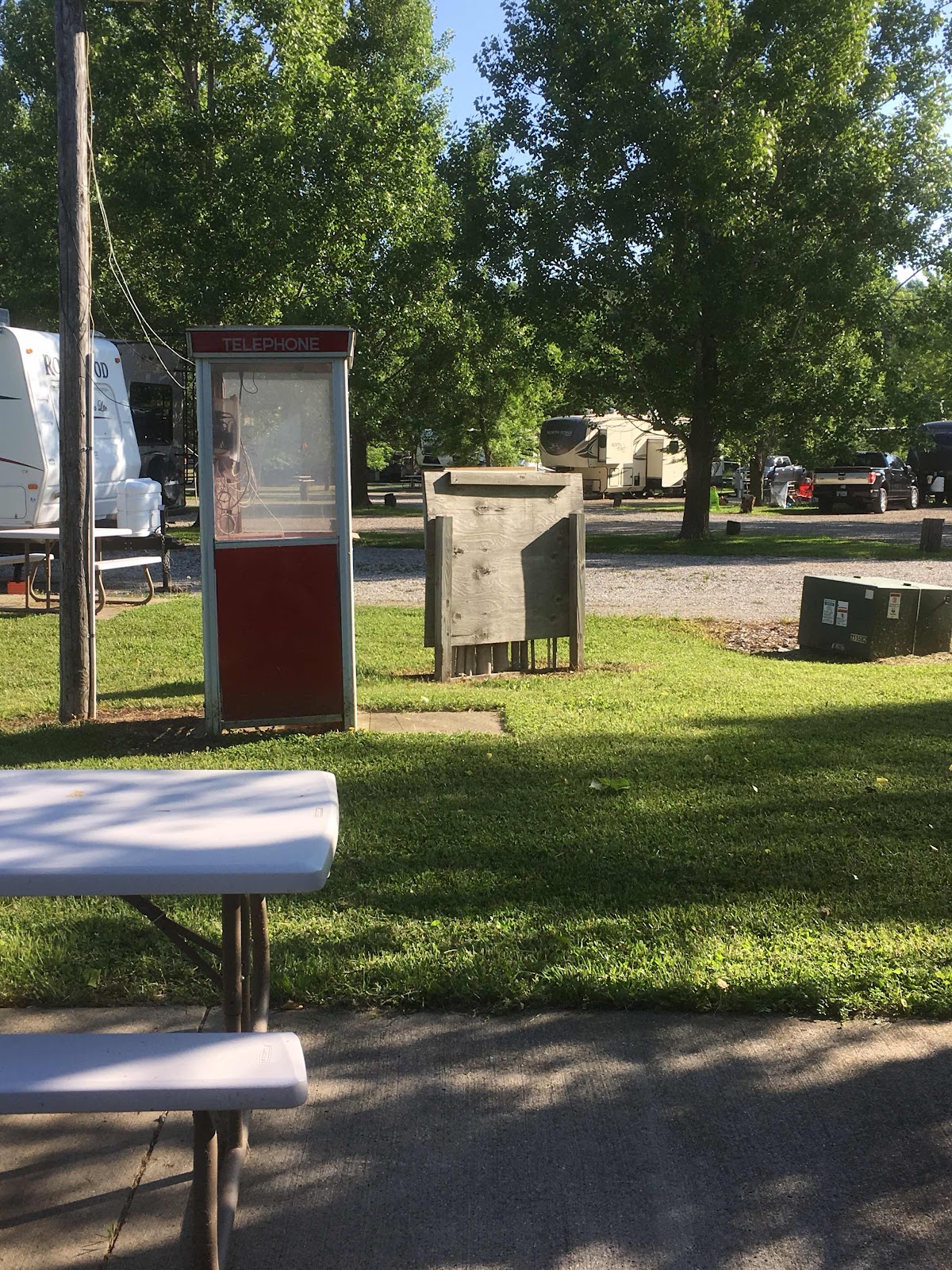 The view from our campsite. It now contains the WiFi Router. 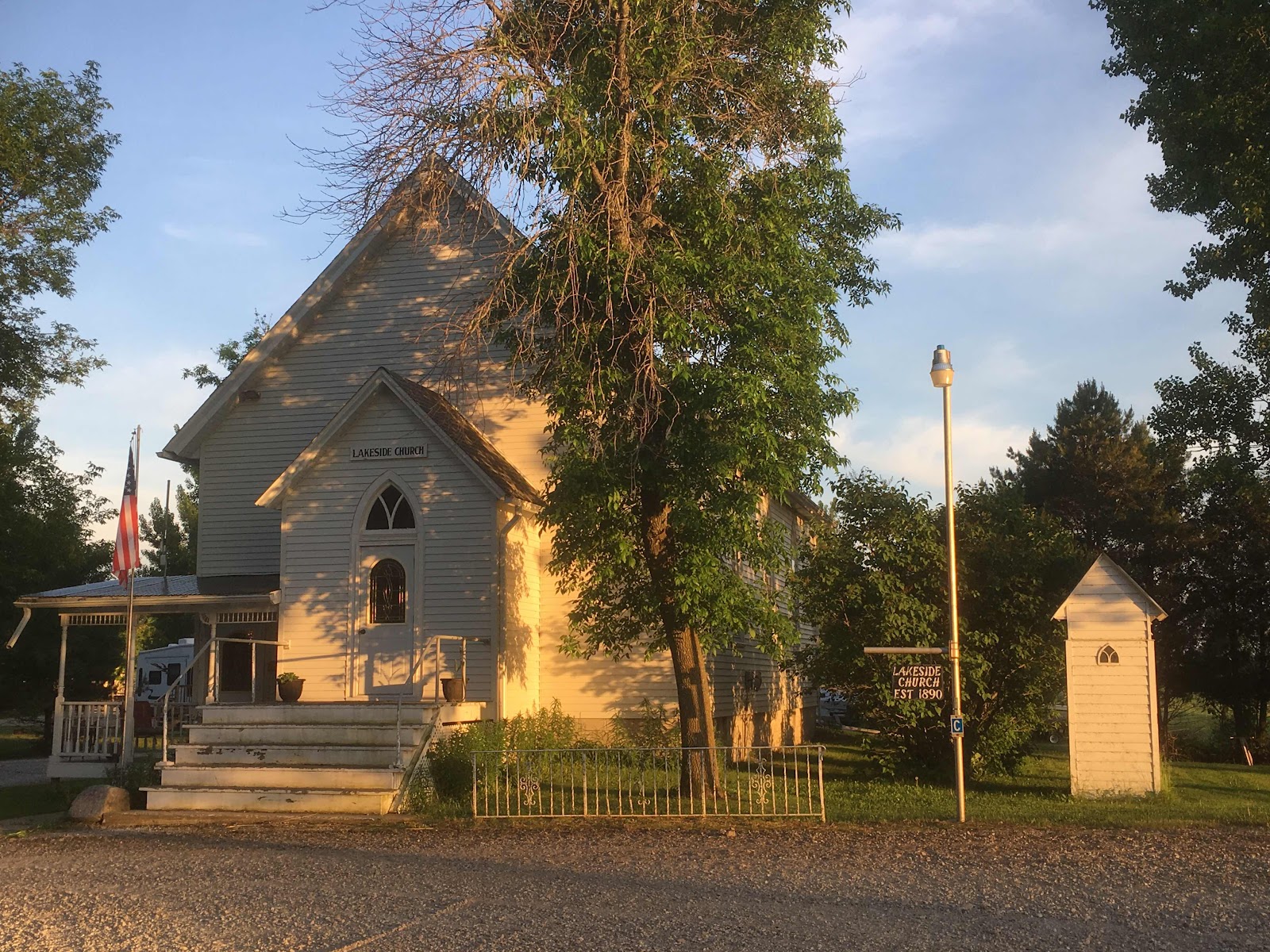 This small church onsite offers non-denominational services on Sunday mornings.
Yesterday, we chose to take a tour of the Winnebago RV manufacturing plant in Forest City, about twenty miles from Clear Lake. It was well worth it, a 2-hour tour and we saw all stages of Class A and Class C Motorhomes being built. I had visited the plant before, but enjoyed the tour and the museum just as much this time.  On the way back to the RV park, we took a detour to the crash site that occurred on ‘The Day The Music Died’, February 3, 1959 when Buddy Holly,  Ritchie Valens, JP Richardson and their pilot lost their lives in a plane crash after their concert at the Winter Dance Party at the Surf Ballroom. It is just a small memorial marker that you get to after about a half-mile walk along a cornfield.  We then drove through Clear Lake, through the downtown, past the Surf Ballroom, and back home. 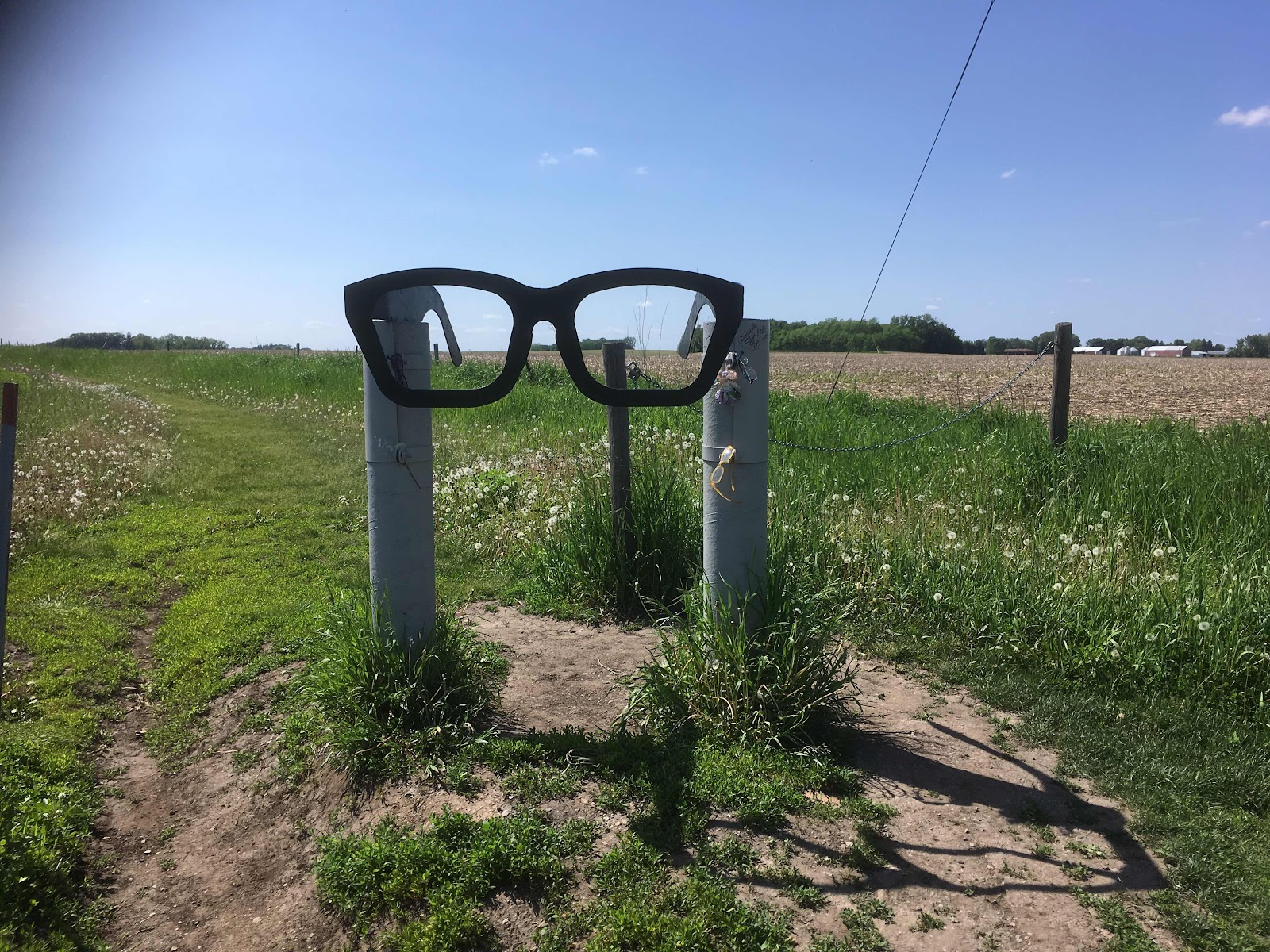 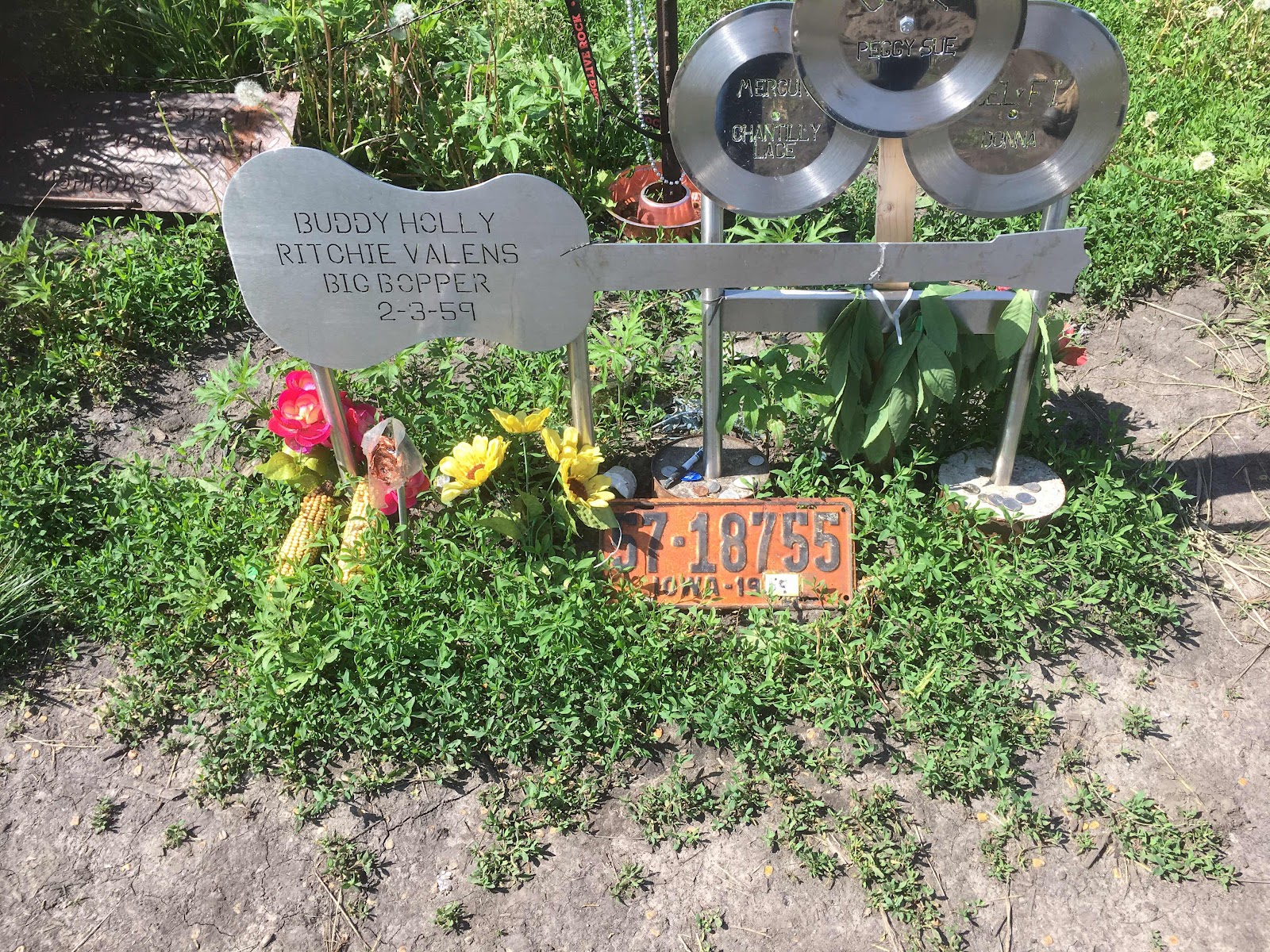 This morning, I called Sylvia, one of my Mesa cleaning customers who lives here and I stopped by her house for a short visit. She has a beautiful home on the lake and she was impressed that I had some knowledge of the perennials that she had in her gardens. We had a nice visit, although short. She is having some health issues and I sure hope that all works out well for her.
On Tuesday as we were driving here, about 20 miles west of our destination, we went through the small town of Britt and I noticed a sign for the National Hobo Museum, so that was today’s destination.  I remembered My Uncle Vic telling stories of his travel experiences back in the mid-50s when he rode the rails and hoboed his way to Alaska and back. And also back there in my personal archives is a story of Patrick’s meeting a traveler in the hobo jungle, a wooded area east of Tenney Park between the river and Fordem Avenue in Madison, probably around 1975. There were paths through the woods where he and the neighborhood kids rode their bikes. Can you imagine an encounter something like that these days? He came home and told us about the nice man that he met while riding his bike through the woods and we went there to meet the guy, but he was gone when we got there. The camp was tidy, with the grass worn down to packed mud, there was evidence of a campfire. Today, you would say it looked like a homeless camp. 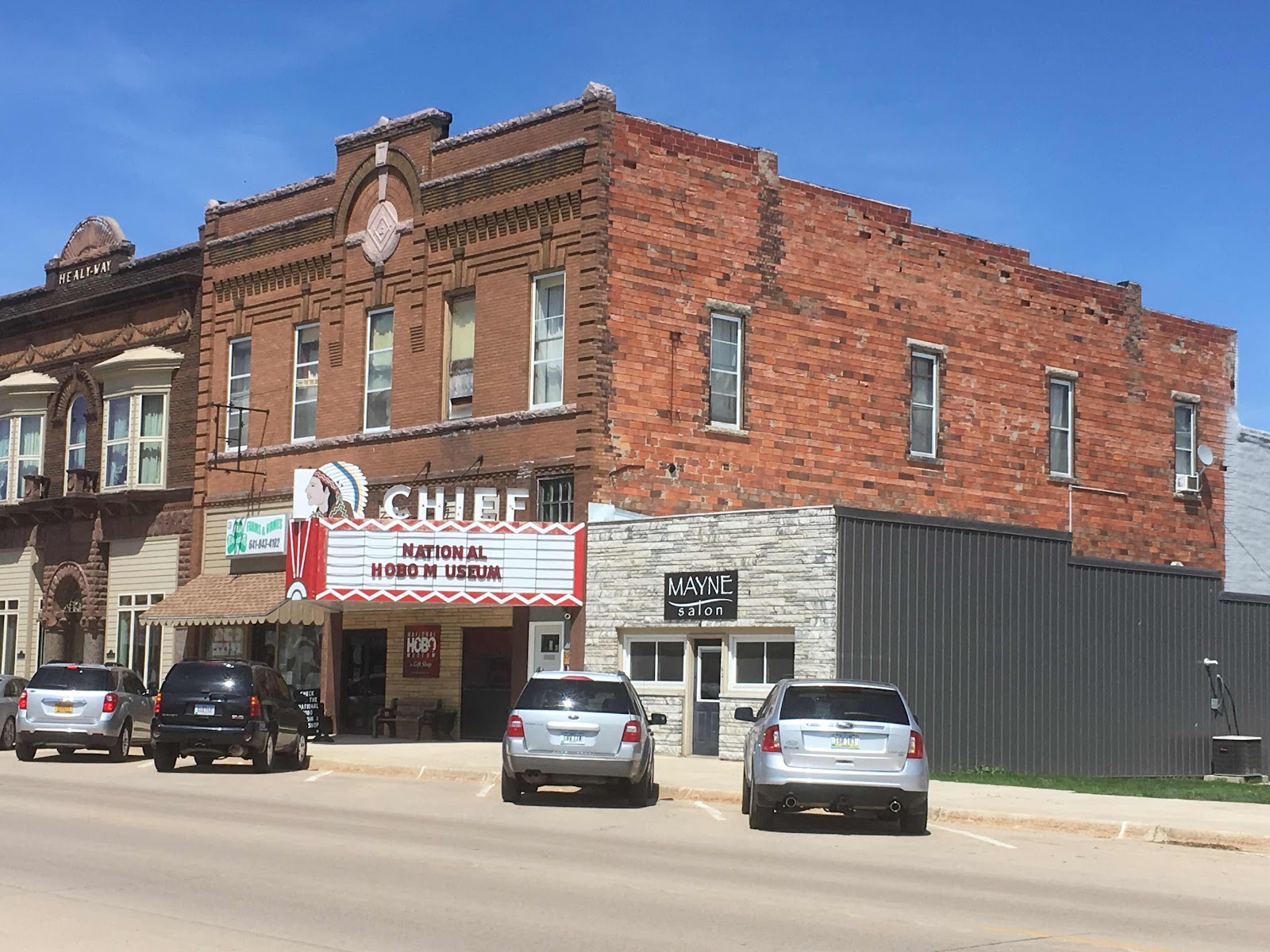 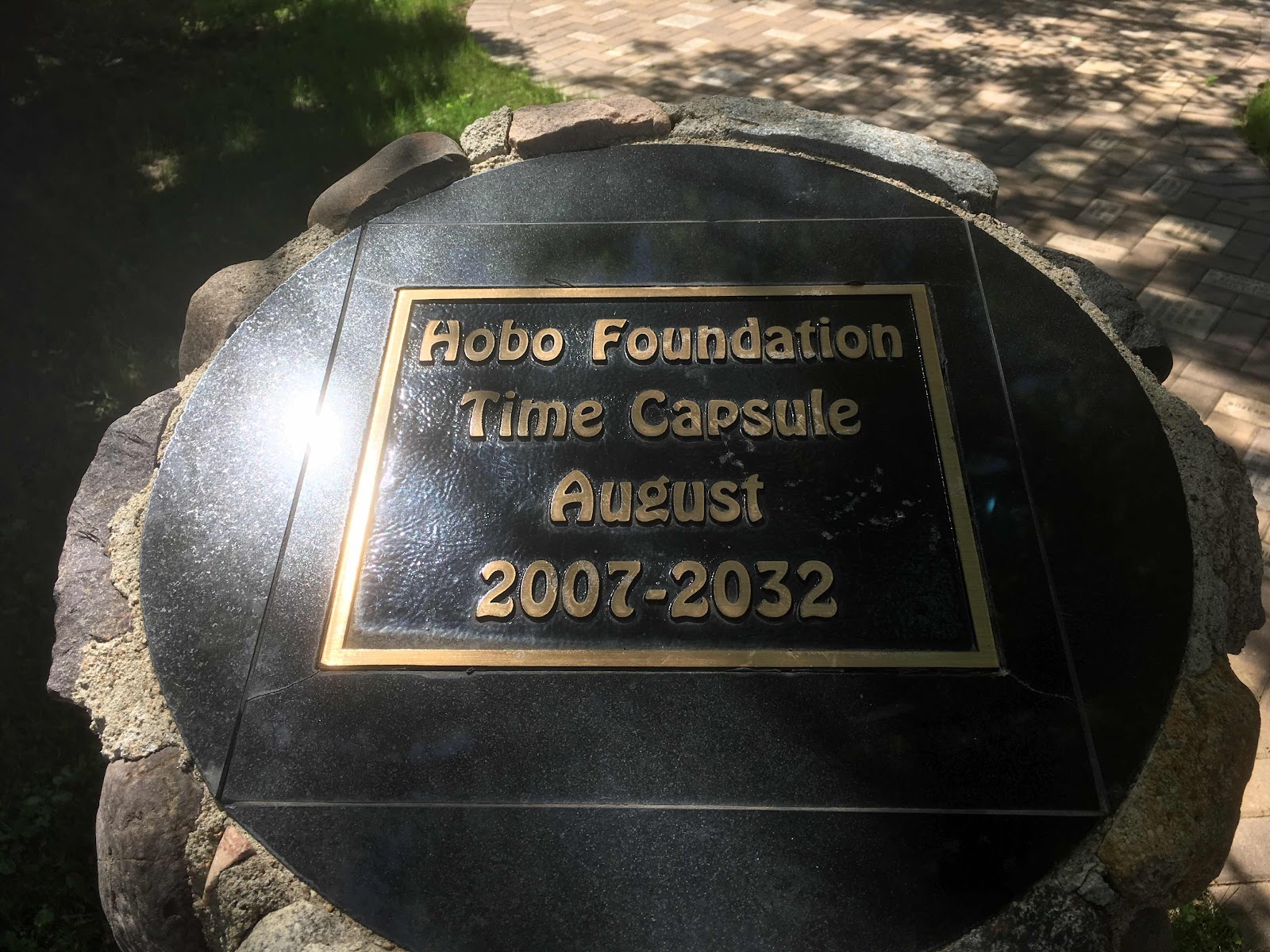 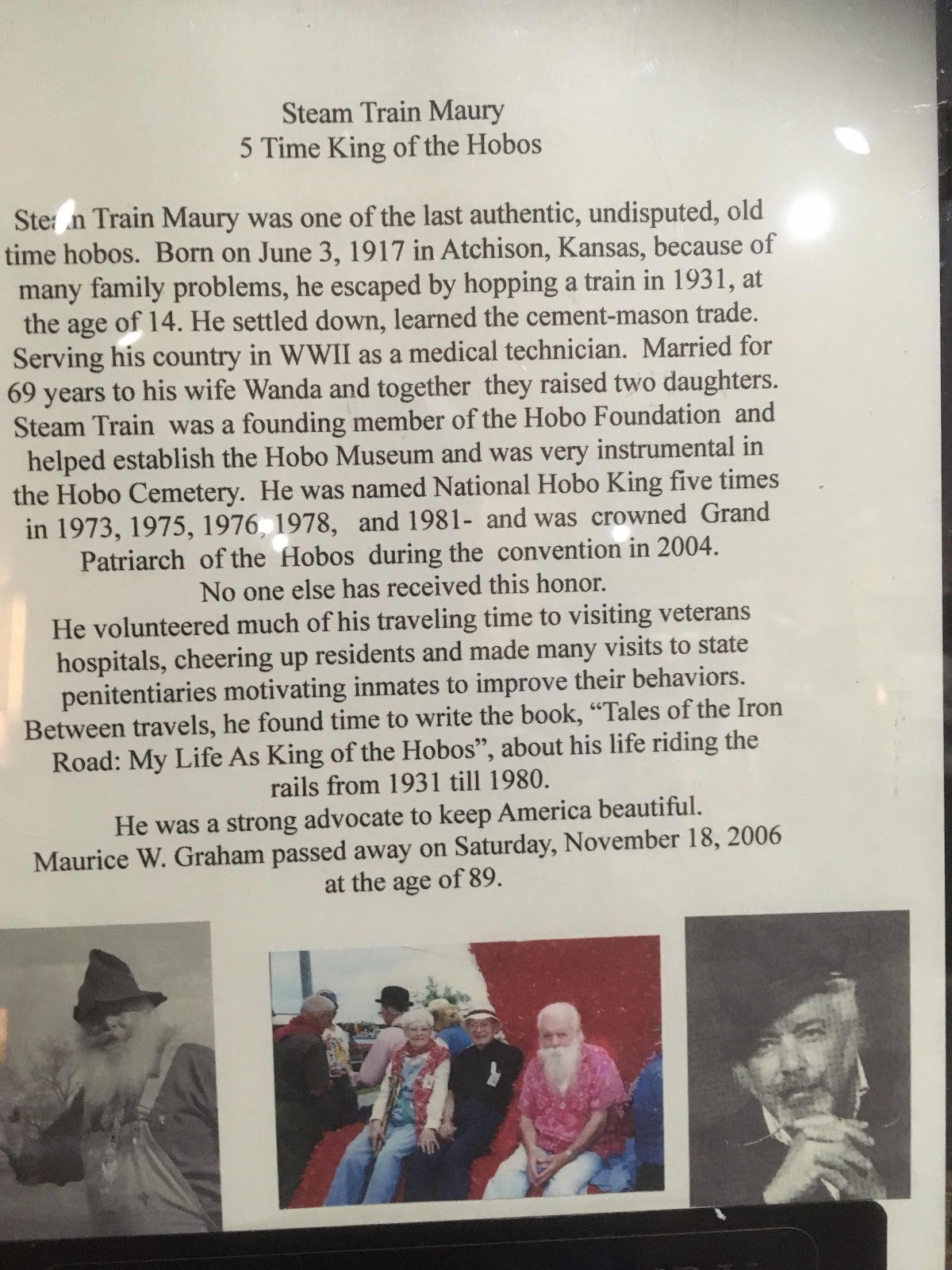 The museum was interesting and we learned that the small town of Britt has been home to the National Hobo Convention, an annual gathering of Hoboes since 1900.  It sounds like it’s an elaborate event that crowns a King and Queen. We became focused on a documentary movie that was playing about the hobo life during the depression, many of those guys were saved from their desperate lifestyle by the forming of the CCC that created jobs and many of our national parks. It is a story that I will remember when I see a monument in recognition of the CCC in my travels.
I found this online, but it was on display at the museum:

This ethical code was created by Tourist Union #63 during its 1889 National Hobo Convention in St. Louis Missouri. This code was voted upon as a concrete set of laws to govern the Nation-wide Hobo Body; it reads this way:

In Clear Lake, we walked through the Surf Ballroom and that brought back memories of the 4 years that Mike and I went to the Winter Dance Party during the mid-80’s. What great times those were: cold, February travels, dressing in 50’s fashions, partying with friends, hearing great music, doing the bunny-hop across the stage, rocking and rolling and dancing the night away.
We had dinner and a beer at the Surf District Rock & Roll Grill where the food was good and the beer was cold and our server was quite friendly and proud of his town.
Posted by Bridge Coast to Coast Saga at 4:50 PM