Exploring the coast was the order of the day and it was quite a day. It started out chilly and cold, so we brought several layers with us.  We had a nice conversation with a gal from Wisconsin who was checking for animal activity on the Alcea Bay when we were walking Frisco. She had seen us pointing at something out in the bay, we thought it might be seals but turns out it was wood debris or rocks. 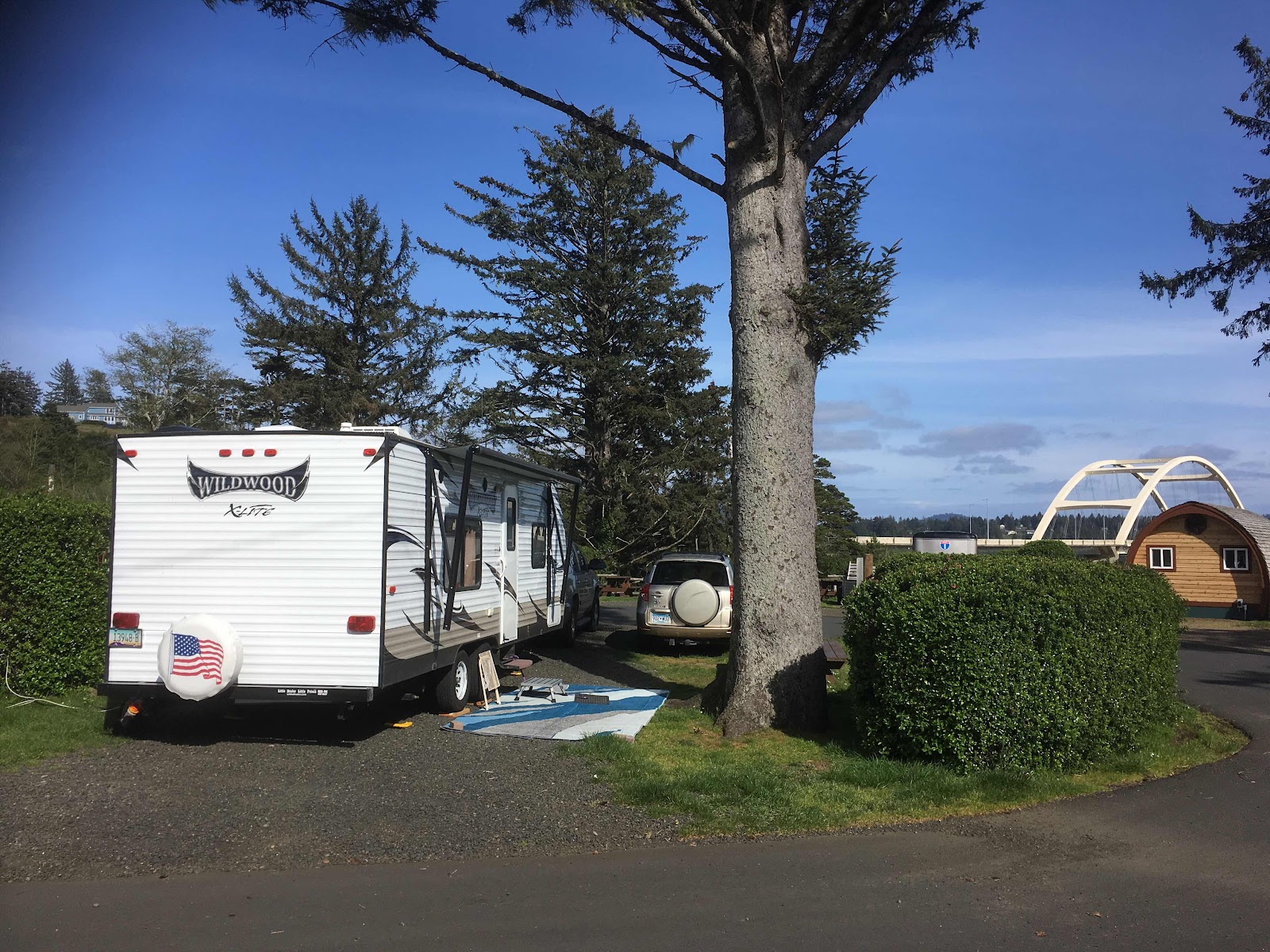 Our site at Waldport, OR

All along the coast, scattered about every few miles, there are pullouts with scenic viewpoints, beach access roads, and roads leading to campgrounds and day-use areas.  We headed south on US-101 and we pulled in at Tillicum Beach campground in the Siuslaw National Park just to check it out and then a scenic drive through a residential neighborhood along the ocean in the small town of Yachats. And then it as on to the Cape Perpetua Visitor Center, a National Forest point of interest where we browsed around the museum and took a hike to the beach to watch the surf pound onto the rocks along the shore.  It was there that we saw Cook’s Chasm and Spouting Horn where the rough surf forces the water and air mixture up into the sky and it appears like a huge spout, several feet in the air. 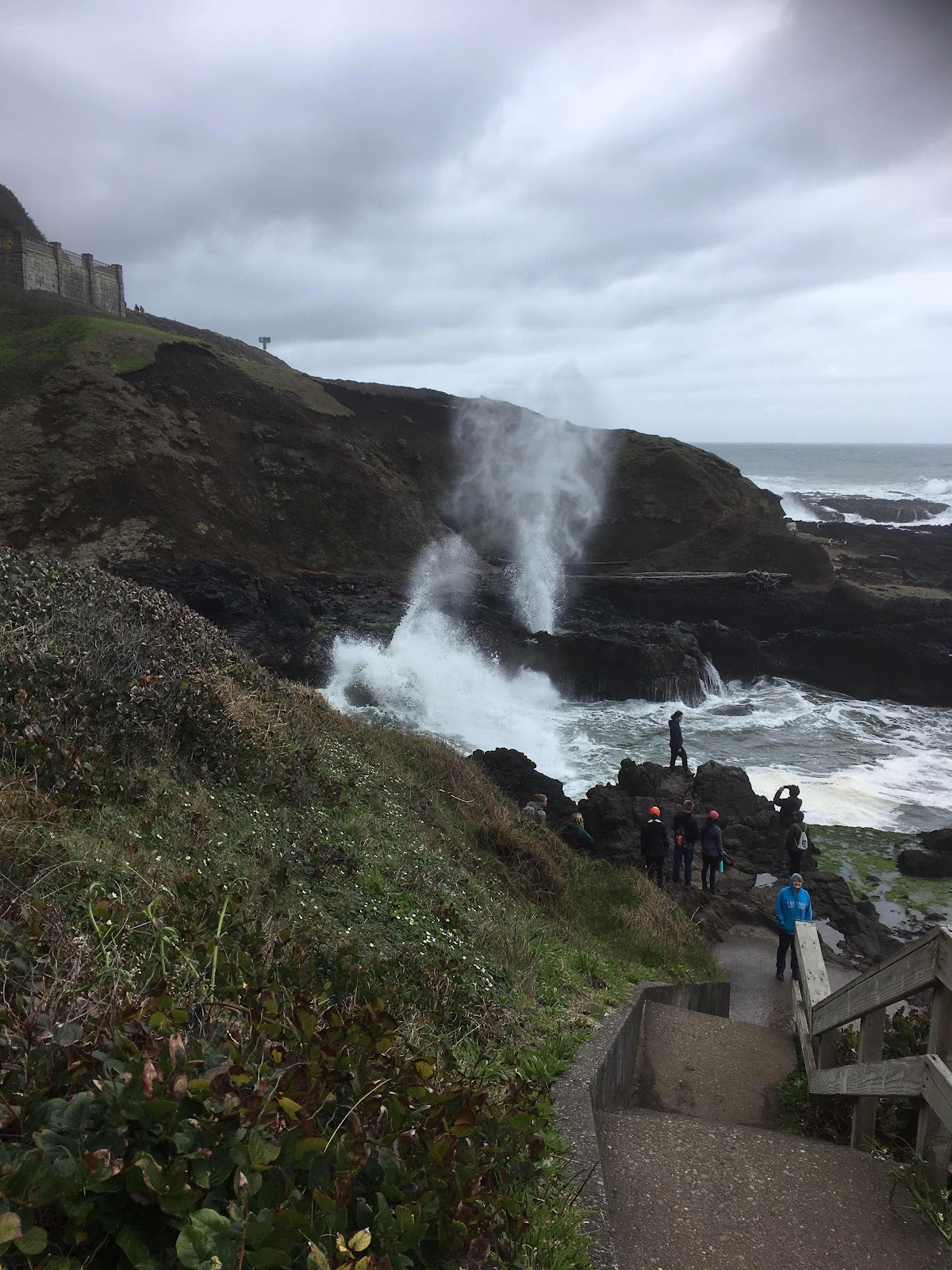 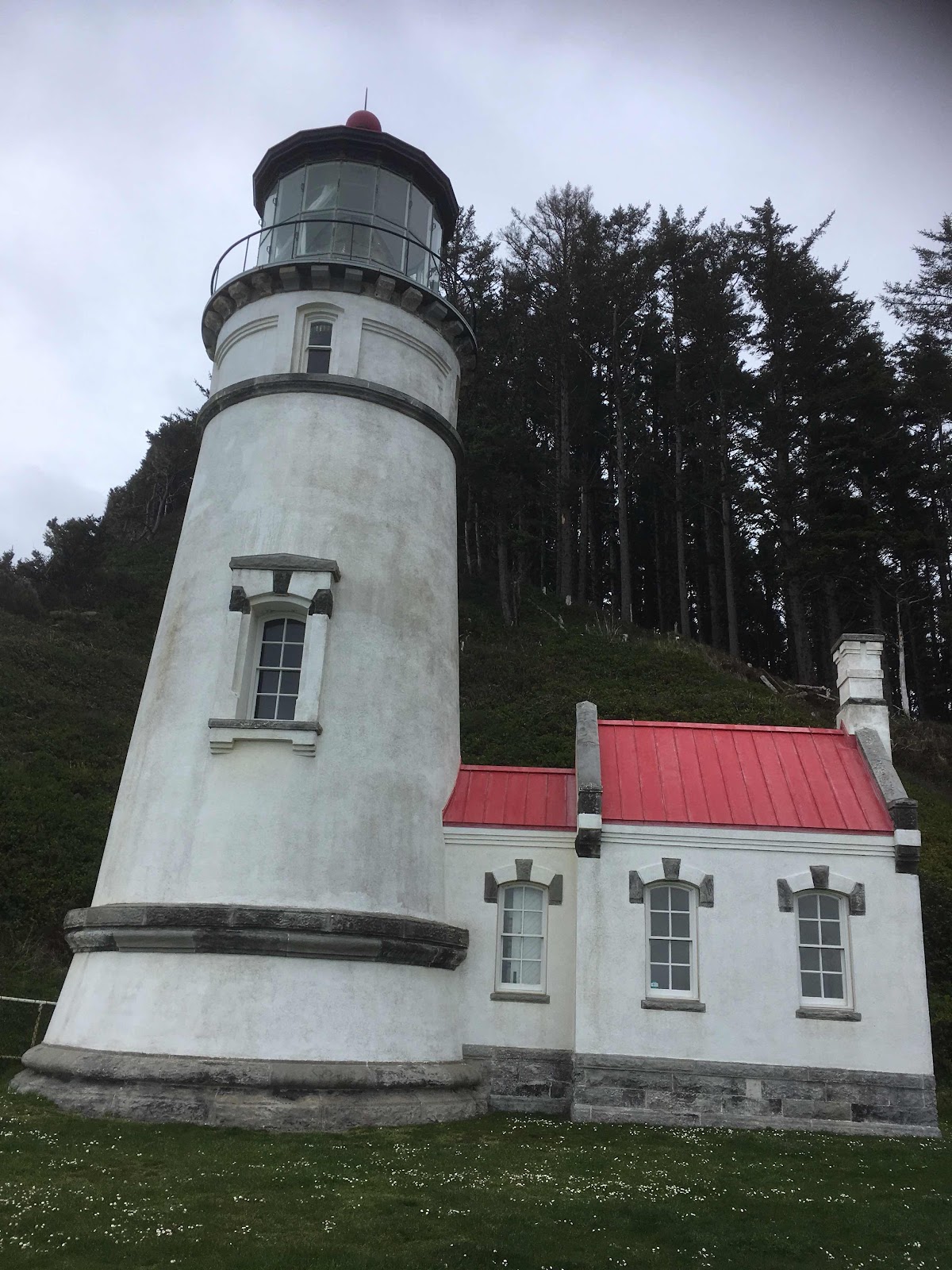 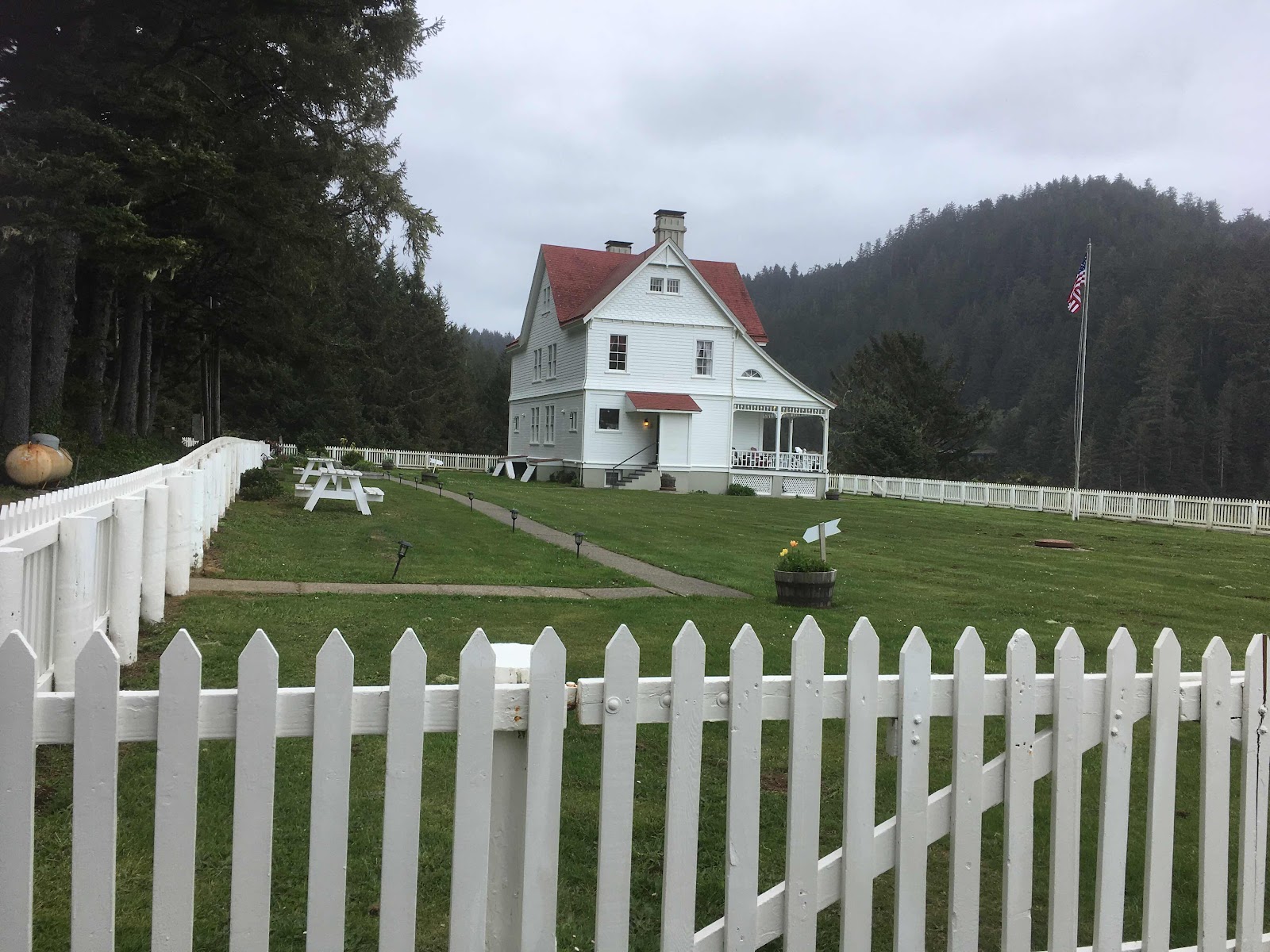 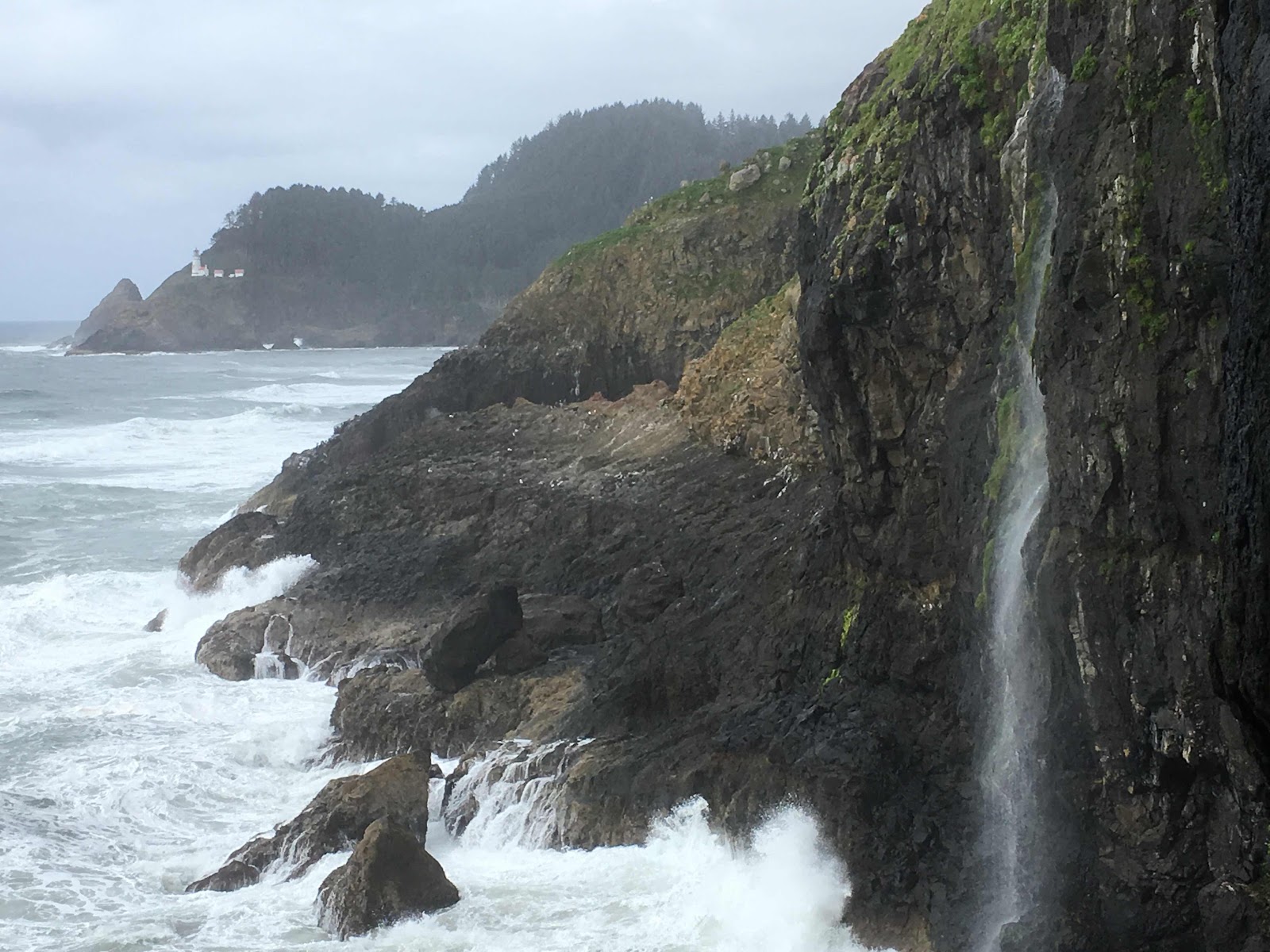 Heceta Lighthouse from down the road.

Down the road a few miles to the Sea Lion Caves where we went down several flights of stairs, then took an elevator down 200 feet to the caves where the nations largest population of California and Stellar Sea Lions gather on the rocky ledges during the winter months.  In summer, they venture out of the caves and breed and have their young on the more exposed rocky ledges. It was loud and stinky in there but we saw lots of sea lion activity. 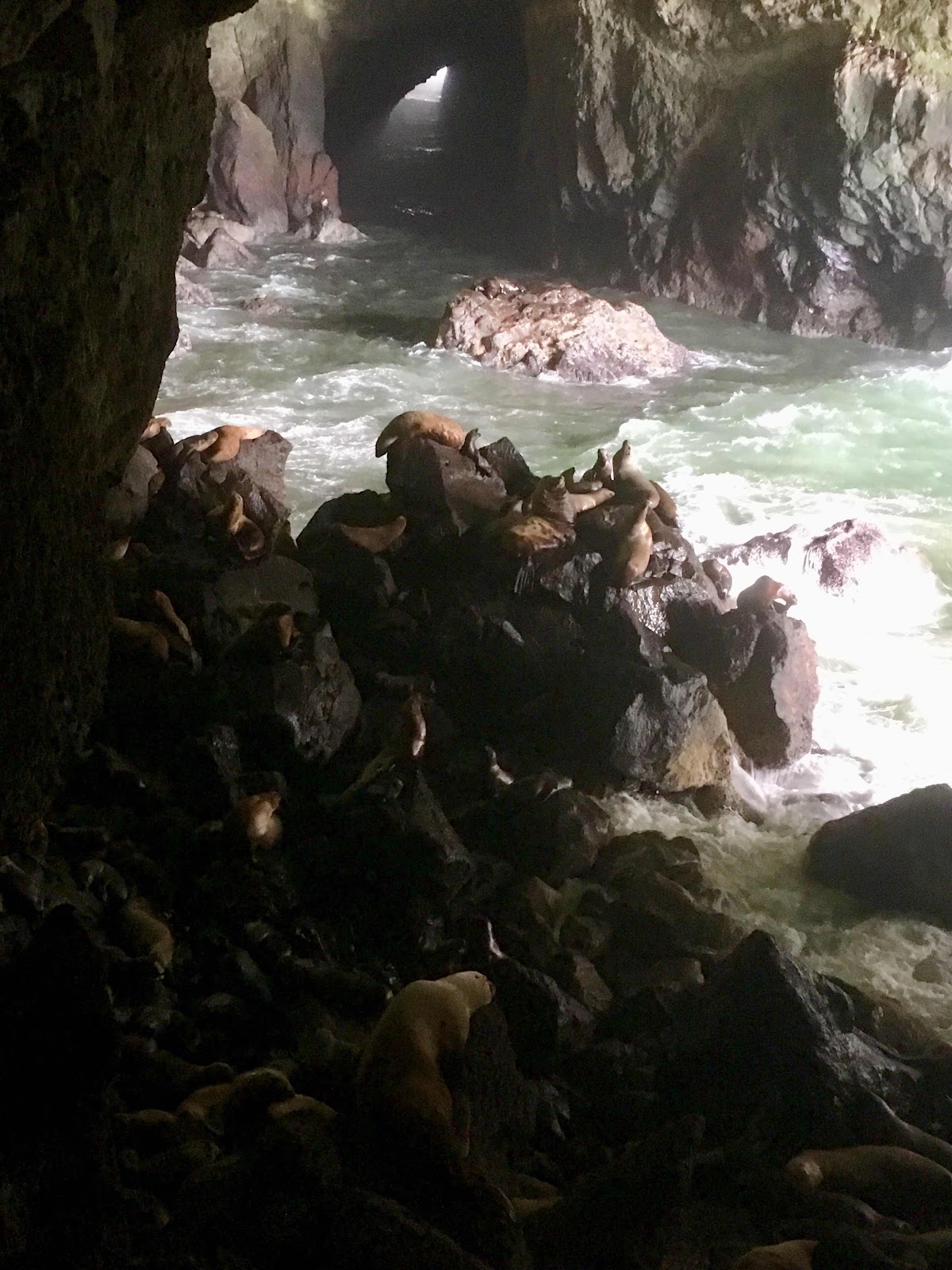 Just a little bit farther down the road was the Hobbit Trail (named because the path to the beach appears like a tunnel) and we both thought that sounded interesting. When we parked the car, I noticed some activity in the vehicle next to us and sure enough, they had a flat tire.  It was a young couple from Germany and they were having trouble figuring out how to get the spare tire released from the mounting under the rental car.  They would have called roadside assistance but had no cell signal. Tom offered his assistance several times and they were quite appreciative. We hung around until they had the spare tire on the car and then we headed down the trail. 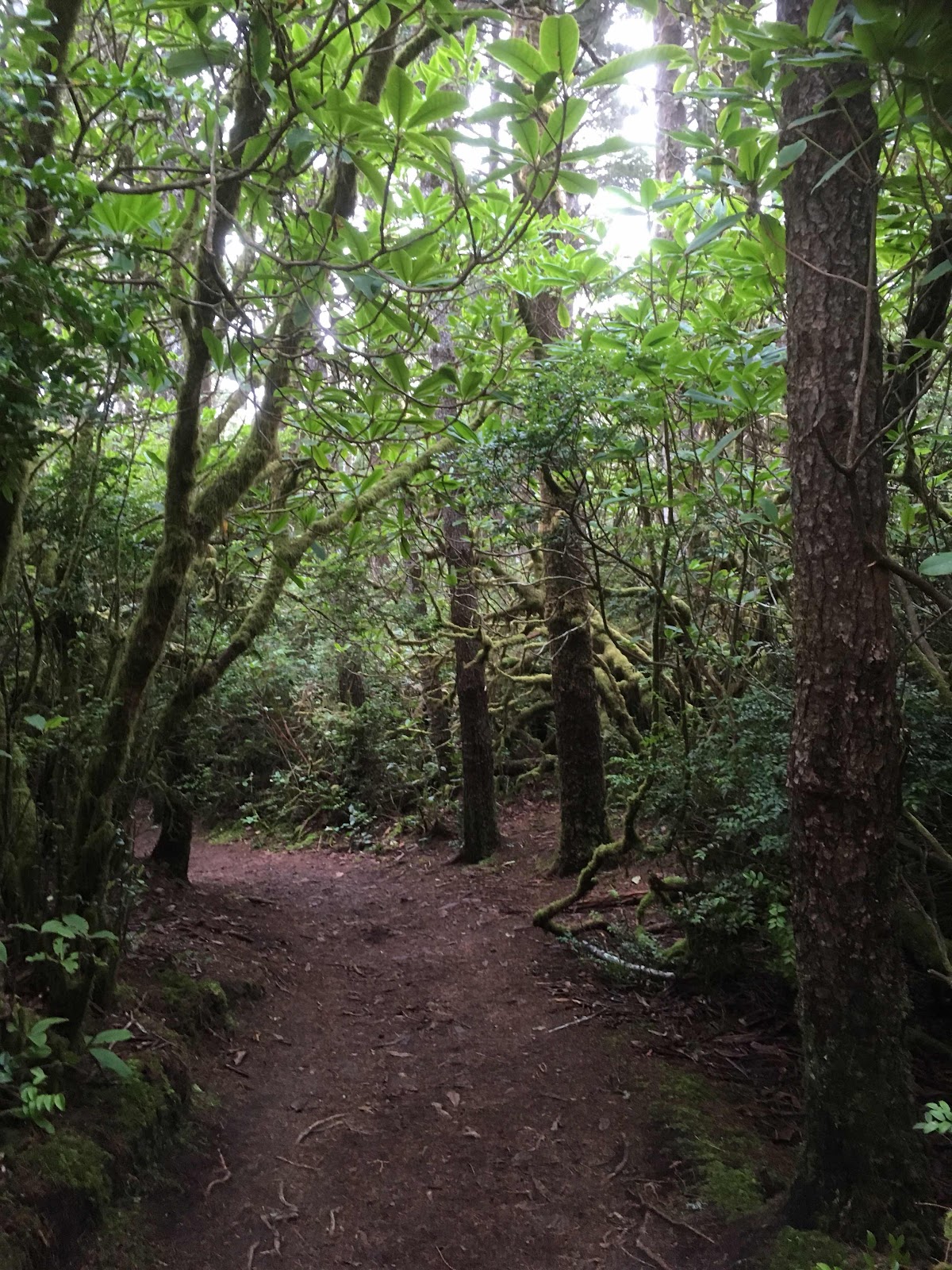 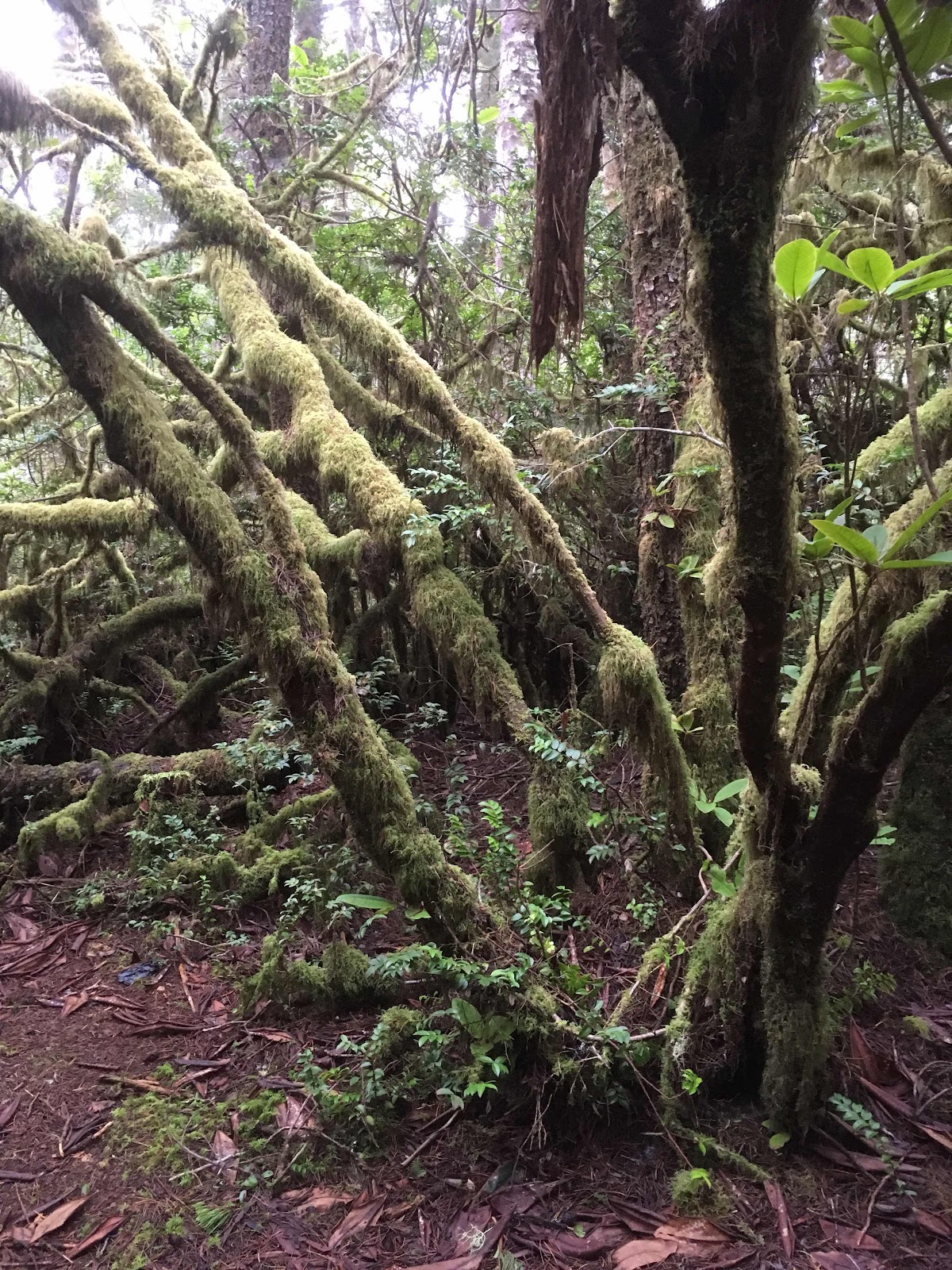 It led 1/2 mile downhill through the wooded forest and through several tunnels and on down to the beach where we walked around and poked at some of the debris that had washed up. As we headed back to hike up the trail, we met up with the folks with the flat tire again. They thanked us again and invited us to get in touch if we ever get to Germany. We learned that their names are Christoph and Seda Rass from Osnabruck and they left us with a business card and contact information. Seda told me that nobody in Germany would have offered assistance, as they tend to keep to themselves. They felt that Americans were very friendly and helpful and I felt happy to hear that.

The hike back up the hill was a tough one, but we made it. Yes, we are out of practice and haven’t done the hiking that we had in the past.

We stopped in Yachats (yah-hauts) for a halibut dinner at the Blue Whale restaurant, after a couple of attempts at a brewery and a pub that were quite busy. Dinner was good stuff and a cocktail would have been nice, but not necessary. We were both tired after a full afternoon of activity.

Posted by Bridge Coast to Coast Saga at 9:02 PM