Laundry Day, Whoopi! It seemed like I just kept on plugging quarters into the dryers, it took too long. I have to remind myself that these are RV parks and they rarely choose to invest much $$$ in these places.  This one is very nice regardless of the dryers.
We drove around Mt Shasta City and found the 2 homes that Joyce owned back in the 70s. Tom took pictures and sent them to her.
We took a drive to Lake Siskiyou, taking a wrong turn first and ending up at the rushing water of Upper Sacramento River, another waterway that is overflowing it’s banks and will be much worse once all of the snow on the nearby mountains starts to melt. 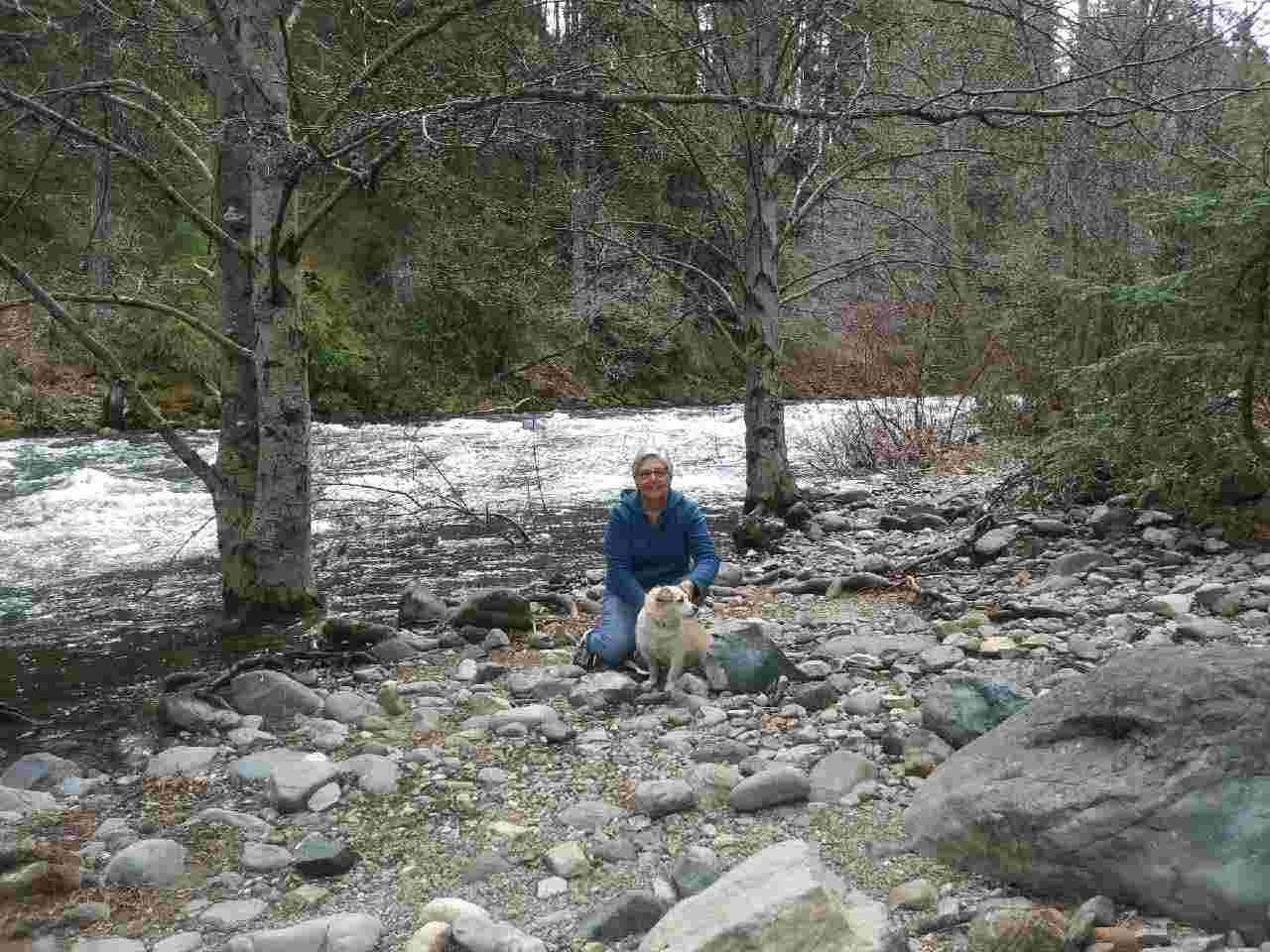 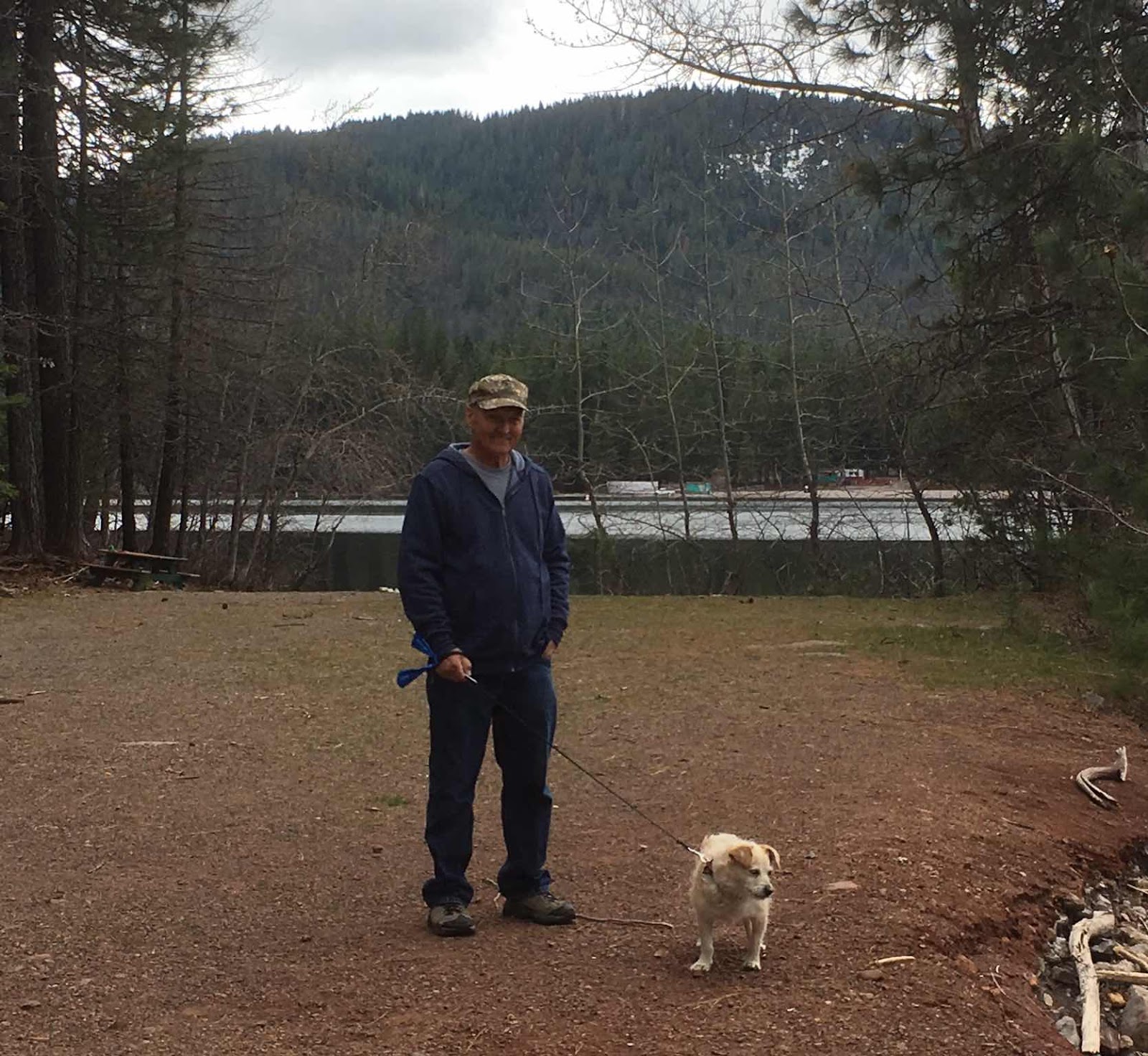 We found our way and ended up at a parking lot near the lake. I parked the car and we walked one of the trails that followed the shoreline. It is one of those picturesque scenes of a pine covered forest surround the lake, topped off with snow covered mountain peaks. 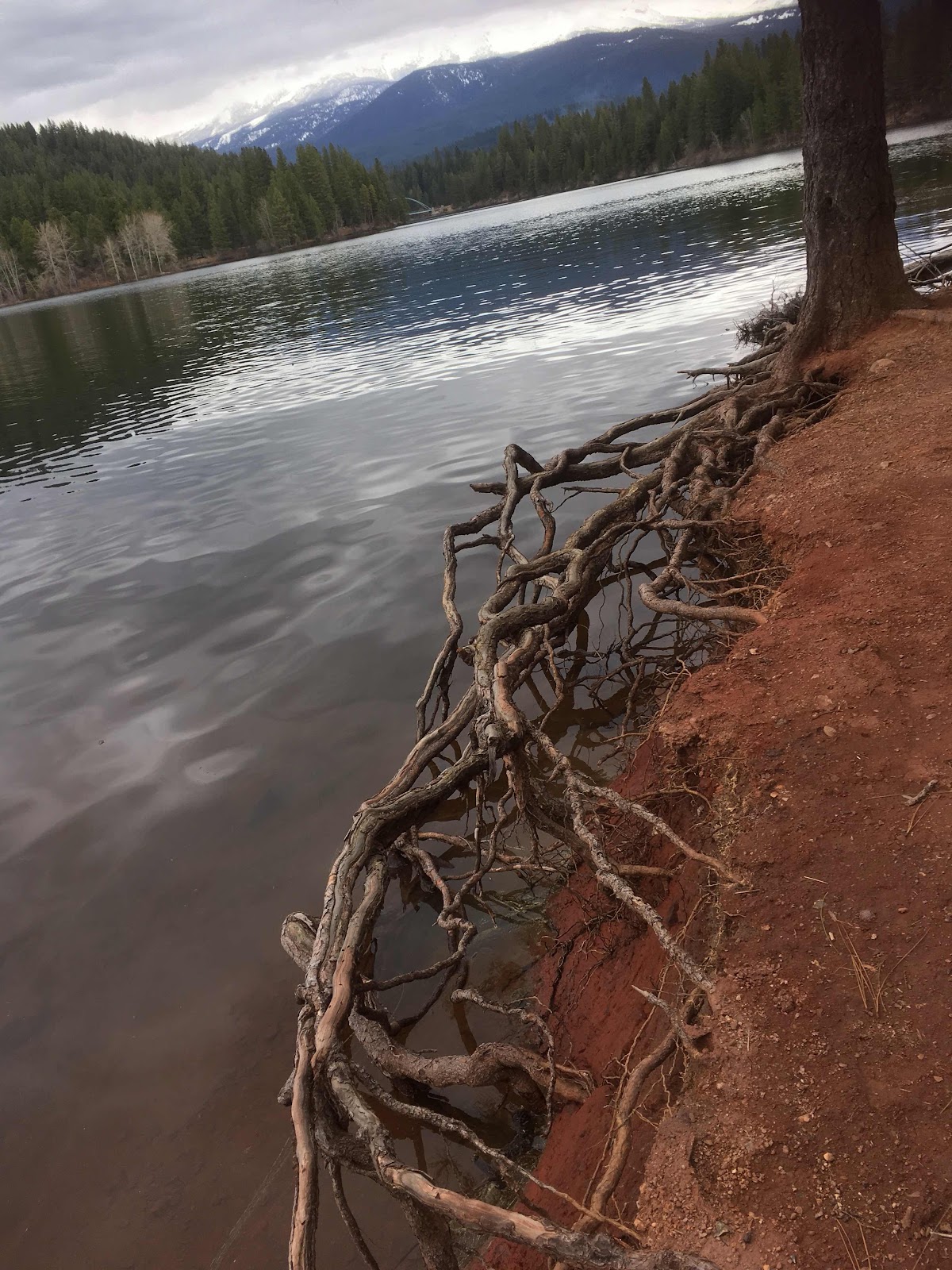 The roots of this tree have been washed away by the water, yet it looks quite healthy. 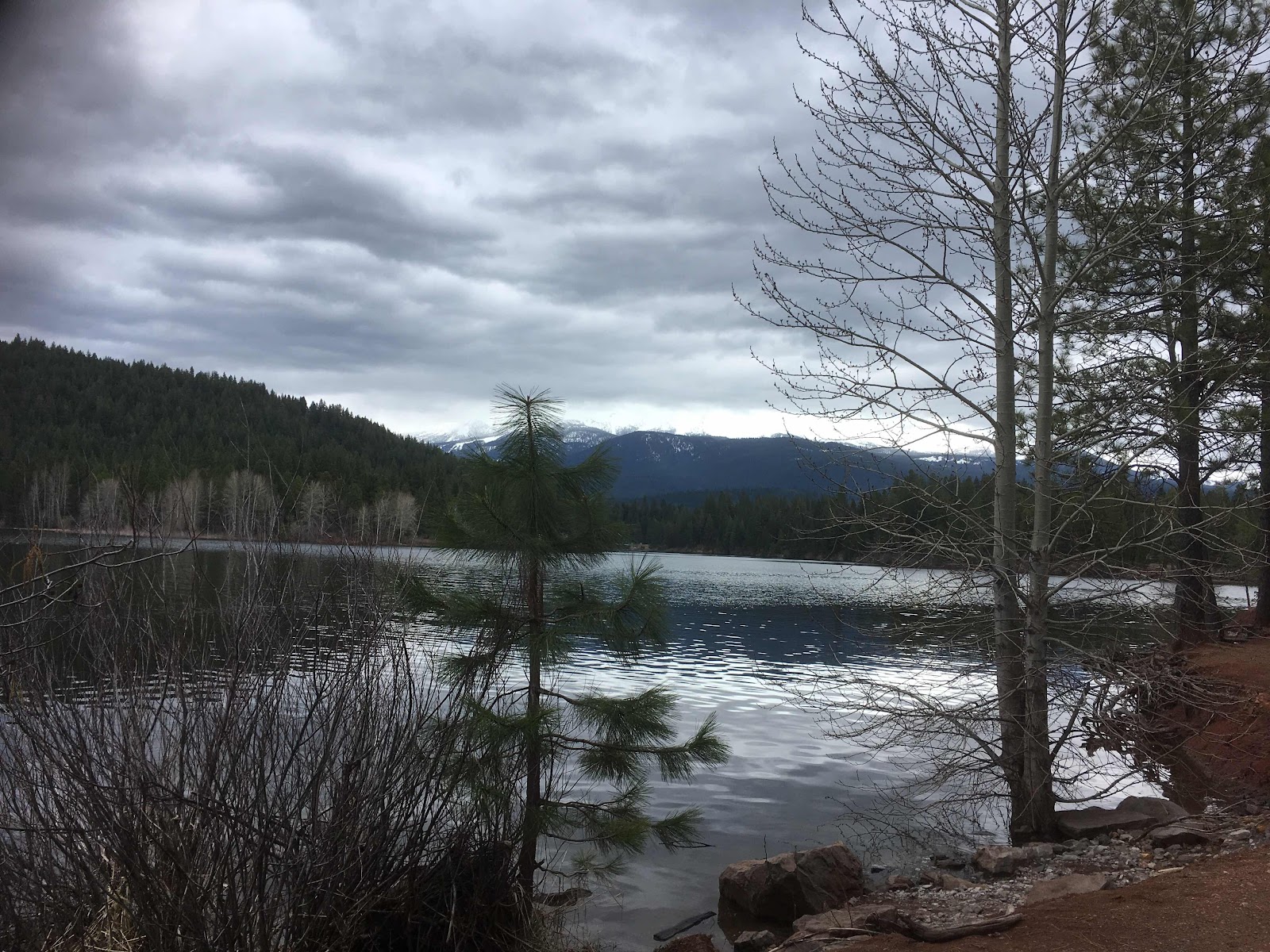 We had a nice walk and I got a FaceTime call from Ben and the family while we were walking, so they got to share some of the views. Charlotte has lost another front tooth and Tom pretended to pull out the wiggly one that still remains.
The drive up Mt. Whitney was too tempting, so we got as far as we could before the road was no longer plowed.  It felt like we were going through a tunnel of snow and at the end of the road, you could see the ROAD CLOSED sign, but the CLOSED part was buried in snow.  I got an uncomfortable feeling that an avalanche could occur.  Later on, at the museum, we learned that Mt. Shasta is an active volcano and some believe that it could erupt at any time.  I also learned that it has at least 4 glaciers on top (14,000 feet). 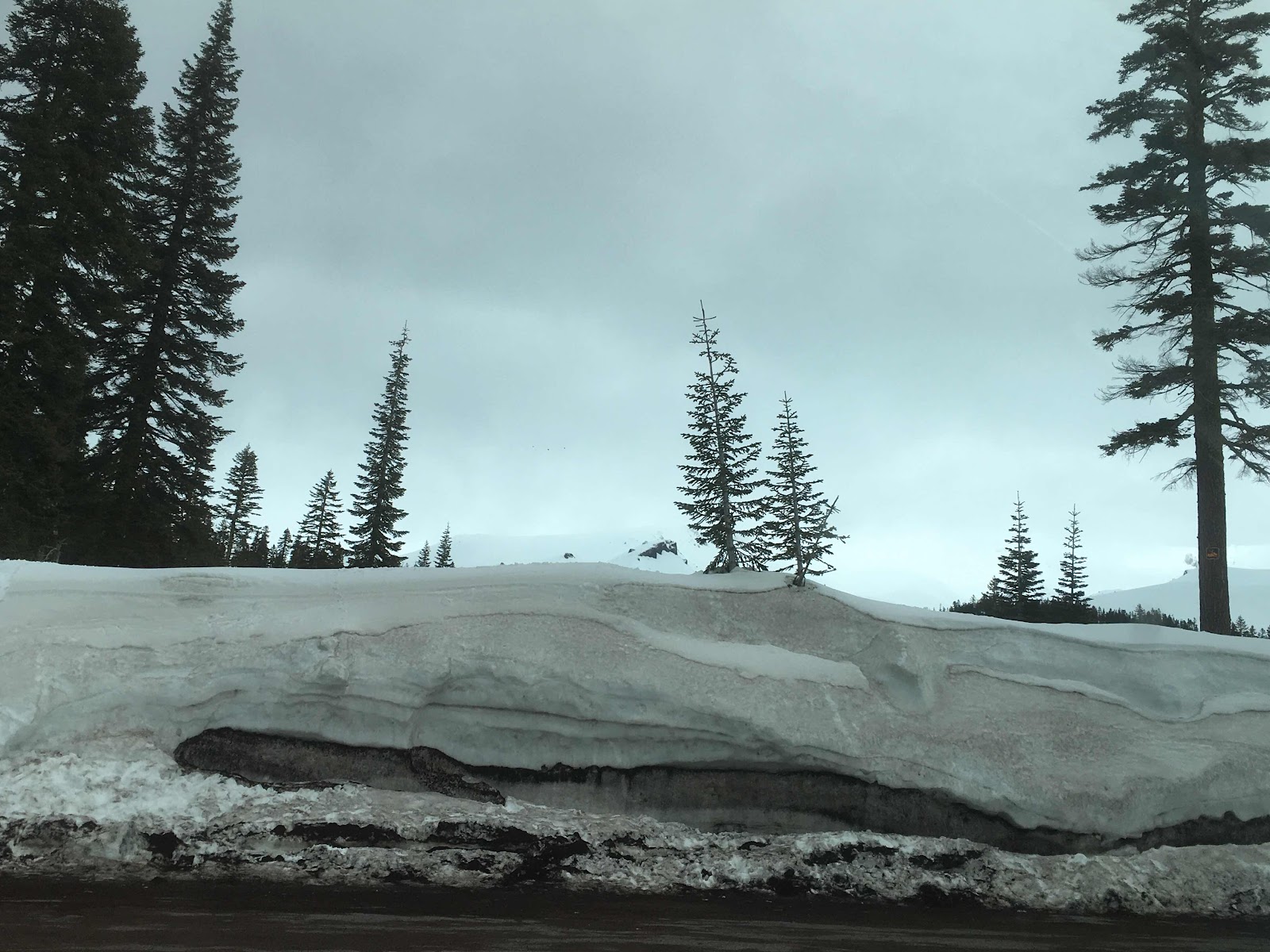 We did a little more exploring at the local museum and fish hatchery. It was a nice little museum that told about what brought this area into being, mostly lumber, the discovery of gold nearby, the transport of good to the goldfields, and the railroad.
While browsing through the museum, I overheard a conversation between the museum attendant and a visitor who was one of the many people who were displaced by last summer’s Campfire forest fire that wiped out the town of Paradise and much of the surrounding forest.  He had been living in a FEMA camp near his former home and the FEMA camp turned into a meth camp. He was desperate to escape, so a friend let him come here to stay in a cabin that she owned. While here, he discovered a huge meth house right across the road from the cabin that he was staying in and nearby, an entire hobo meth camp community.  It was a very disturbing conversation, and it made me realize that this beautiful small town and is certainly not exempt from the drug epidemic that our country is faced with - it is disturbing that there are so many people living in distress. Apparently, many have become desperate and are turning to drugs.  It is truly messed up - please vote against the current incumbents who are running our government at the next election, friends!
Before heading back home, we picked up a Papa Murphy’s pizza. It hit the spot!
Posted by Bridge Coast to Coast Saga at 7:02 PM